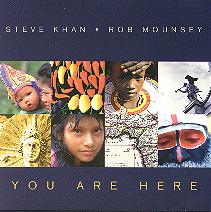 Steve Khan & Rob Mounsey: You Are Here -- by George Graham

For me, music is most engaging when it defies categories, either by mixing previously disparate styles or by seeming to be one thing and turning out to be quite something else. This week's album is an excellent example. It's the new release by Steve Khan and Rob Mounsey entitled You Are Here.

Both guitarist Khan and keyboard man and arranger Mounsey are veteran studio musicians solidly grounded in jazz, and known for their versatility. And what they do on their new album is rather hard to pin down. There are certainly elements of jazz, but mainstream acoustic jazz it is not, with lots of creative use of synthesizers and what could be called "sound sculpting" by Mounsey. With all the synthesizers and the Khan's exclusively acoustic guitar, some might think it to be New Age music, and indeed the pair's last duo album in 1988, Local Color was nominated for a Grammy in the New Age category, which left the duo rather amused. But their music is anything but the slow-moving and simple material that characterizes typical New Age -- Khan and Mounsey create instrumental music that is multi-layered, very sophisticated harmonically, and brimming with interesting thematic ideas. And to that, they apply some infectious world beat rhythms, from salsa to African. What they end up with is one of those hard to categorize blends that nevertheless sounds thoroughly natural and unforced, without a hint of intentionally trying to be wildly eclectic.

Steve Khan has had a long career in jazz-rock fusion music in addition to his extensive studio work. He was a charter member of the Brecker Brother Band back in the early days of fusion in the mid 1970s, and over the years had been releasing a series well-received albums under his own name, mostly on electric guitar, the most recent of which was Got My Mental released last year.

Rob Mounsey is less a household name, but his music is perhaps even more ubiquitous. His list of credits is impressive indeed running from a recent project with Aretha Franklin singing a Puccini aria to creating the theme to the commercial television soap opera "The Guiding Light." Among his significant album credits are Steely Dan's Gaucho, Donald Fagen's The Nightfly, Paul Simon's Graceland, and James Taylor's Hourglass. When not serving as a hired hand, Mounsey has created a series of rather infrequent albums under the name The Flying Monkey Orchestra, the first of which was pretty much Mounsey himself in 1990. But the subsequent releases, including Back to the Pool in 1993, and the brilliant Mango Theory in 1995, featured several guest musicians, mostly the cream of the New York jazz-influenced studio scene, including Khan. On each of these recordings, Mounsey showed an uncanny ability to use high tech synthesizers to create music that was distinctly un-machine-like, and often downright tropical in sound.

A decade after their first duo album, Khan and Mounsey are now out with You Are Here, and though the two co-compose the bulk of the music, the album is rather more like a continuation of the Flying Monkey Orchestra series: creative use of synthesizers, usually with a very danceable, but flowing rhythm -- music that's outwardly very attractive, but is full of interesting and creative compositional elements, some subtle, and others like clever changes of direction and theme that make the music thoroughly engaging. As mentioned, Khan sticks to his acoustic guitar on the record, surrounded as he is by Mounsey's panoply of synthesizer sounds. For most of the tracks on the album, they are joined by percussionist Marc Quiñones, who helps to prevent this from sounding like an electronic music record.

Most of the album's eight tracks are fairly lengthy, but the duo keeps them interesting with new ideas being introduced as the music goes along. Typical, is the album's opening piece and its longest at ten and a quarter minutes, Clafouti. The tune suggests a cross between a Latin American and an African beat. Quiñones' hand percussion keeps things sounding quite human, while Mounsey creates a bunch of interesting synthesizer sounds. <<>> Khan puts in some tasteful guitar work. <<>>

Also reminiscent of past Flying Monkey Orchestra recordings are this album's slower pieces on which Mounsey does some attractive wordless vocals as a kind of added color to his synthesizers. Fazendiero may be rather laid back, but it's full of the kind of sophisticated compositional elements that would keep a music major happy. <<>>

You Are Here does have a distinctly Latin streak running through it. Platanos Maduros is built upon a gentle salsa beat, while Mounsey and Khan manage to weave in quite a few other bits of musical eclecticism masquerading as understated playing. <<>>

Taking on a more African atmosphere is Peanut Soup, one of the highlights of the record. With its infectious six-beat rhythm, aided by Mark Quiñones' percussion, the piece gives both Khan and Mounsey a chance for some engaging solos. Mounsey comes up with an interesting simulation of a cross between a flute and a whistle. <<>>

Decidedly more contemplative in sound is the appropriately named piece by Mounsey Still Life with Mockingbird. This is a good example of how the duo does something resembling New Age music but with much more compositional content than is typical of the genre. <<>>

Perhaps the most intriguing track on the record bears the unlikely title Pallbearers, though once one hears the Mounsey work, one could imagine the slow progression of a kind of funereal march, though perhaps through a tropical rainforest. <<>>

The one piece on the album not by Mounsey or Khan is Viajar y Viajar by former Weather Report percussionist Manolo Badrena. It takes on a distinctly Brazilian flavor as Mounsey goes between his wordless vocals and a kind of slinky synthesized harmonica. <<>>

The album ends with the one solo Steve Khan composition, Anhelante, the most introspective-sounding piece on the record, though it does break into a slow latin beat at times. While it lacks some of the compositional interest as heard elsewhere on the record, the playing, especially by Khan, is first-rate. <<>>

Steve Khan and Rob Mounsey's new joint album You Are Here, is outwardly a sequel to Local Color, record they did together a decade ago, but You Are Here is more reminiscent of Mounsey's Flying Monkey Orchestra albums. You Are Here is one of those fine records that deftly evades category. It's got lots of synthesizers, but the music is far too creative and compositionally sophisticated to be New Age. The writing is more typical of jazz, but the Mounsey's electronic instrumentation, and its careful construction in the studio by layering and indeed by use of computer, takes it miles from traditional acoustic, live, improvised jazz. And the percussion and tropical rhythms often give it a World Music flavor, but so many genres are mixed and the fact that this an All American production done in New York, makes it far removed from the Third World. But it is great listening by two superb players, much in-demand as studio musicians. It's that rare blend of music that's easy to listen to but beneath its attractive surface is a lot of subtlety and musical creativity. It certainly meets my test for electronic music: take away the synthesizers, substitute conventional instruments and the compositions would still be interesting, a test which the vast majority of synthesizer-dominated instrumental records fail miserably.

From an audio standpoint, we give the record an "A." Recorded in Mounsey's own studio with a lot of digital gear, the music nonetheless sounds remarkably organic. It's a nice blend of the acoustic and the electronic, and the use of effects to suggest large and small spaces is especially skillful. Dynamic range is also decent.

Creative, convention-defying instrumental music like this is a tough sell, especially given the commercial media's aversion to such sounds. But if you looking for something that you can enjoy either as a great backdrop that suggests tropical climes, or as really interesting instrumental music that rewards careful listening, you can't get much better that You Are Here.