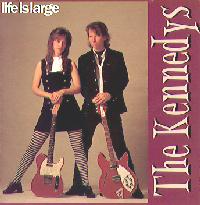 The Kennedys: LIFE IS LARGE -- by George Graham

Those of us who grew up in the Sixties can be excused for getting a case of déjà vu from some of the music being made these days. Most varieties of mid 1990s pop do indeed sound thirty years in time and lights years in style removed from the original Woodstock era, but there is a fair amount of new music that draws very heavily on that period. For one thing, many of the artists from those days are still at work, making worthwhile new music. Perhaps more surprisingly, a not-inconsiderable amount of Sixties-influenced music is coming from performers who hadn't even been born during the early heyday of Bob Dylan, the Byrds, the Beatles and -- who can forget -- the Strawberry Alarm Clock. There is a new generation of folkies, blues and R&B artists, and neo-psychedelic groups. Even some alternative rockers occasionally jangle their guitars and dabble with Beatle-esque vocal harmonies.

This week's album is an excellent example of the return of folk-rock, strongly influenced by the Byrds and also the Beatles. It's the newest album by Pete and Maura Kennedy, who this time around call themselves the Kennedys. Their CD is entitled Life Is Large.

Pete Kennedy is a 30-something Washington, DC-area folkie who has lent his support to many performers over the last decade or so. Recently, he and his wife Maura have been part the band of Nanci Griffith, another outstanding current-generation singer-songwriter. Last year Pete and Maura Kennedy released River Of Fallen Stars, their first full album together, which featured both acoustic and electric folk-rock arrangements. Now, a year and a quarter later, they are out with a stylistically similar, but I think better album that features a first-rate collection of original songs that not only draw on the jangly-guitar folk-rock of the past, but acknowledge the currency of the alternative rock scene, with the nervous rhythms and occasionally brash vocals of the alternative rockers, fortunately without the grungy brain-dead guitar work that is also characteristic of the genre.

The result is a very appealing album that might well find an audience among both Baby Boomers and their kids. The album features guest slots by Roger McGuinn, the Byrds founder, and Nils Lofgren, who was a part of Bruce Springsteen's band. With some help from people like John Gorka and Steve Earle, the album gets into vocal harmonies that sometimes strongly recall the Lads from Liverpool, while on other occasions sounds like Peter, Paul & Mary. At the same time the Kennedys also admit to being fans of the Gin Blossoms.

This album is a more pop-song oriented record than their last, with a dozen short tunes strong on melody and hummable guitar riffs, while the lyrics, mostly about love's ramifications, are literate and tend to make their points in a few good phrases.

The Kennedys point out in their liner notes that instead of spending weeks in one recording studio making this record, they recorded here and there as they toured the country and met up with friends and musical collaborators, such as McGuinn, Lofgren, Earle and others in locales including Austin, Texas, Nashville, and towns in Virginia, Maryland and Florida. But despite the disparate recording venues, Life Is Large has a coherent sound, due mainly to the consistency of Maura's appealing vocals, and Pete's versatile, tasteful guitar work. Also, most of the album has the same rhythm section with Vince Santoro on drums and Wade Matthews on bass.

Life Is Large begins with the track featuring Roger McGuinn on his trademark electric twelve-string guitar, an instrument Pete Kennedy also known for playing. The title song Life Is Large also has a guest appearance by John Gorka doing background vocals. It's a good example of the album's mix of the old and new. It's a kind of classic folk-rock tune, but the rhythm is more typical of alternative rock. <<>> One of the record's great moments comes when Roger McGuinn plays a guitar riff based on J.S. Bach's Jesu, Joy of Man's Desiring, which Pete asked him to do, reprising the guitar line used on an old Byrds song. <<>>

Another highlight of the album is St. Mark's Square, described as a "mythical subway stop downtown." The track distinctly has the feel of mid-60s folk-rock. Guitarist Nils Lofgren is recruited to play accordion on this song that one could easily imagine groups like the Chad Mitchell Trio or the Cyrcle doing about 1966. <<>>

Showing the more contemporary side of the Kennedys is the track Tribe, again with the 1990s beat, and lyrics that are pure pop. <<>>

Of the song Right as Rain, the Kennedys say that the composition started out as a "Buddy Holly knockoff." And on paper, it bears a resemblance, but Pete throws in a neo-psychedelic electric sitar, while the overdubbed vocal harmonies very much recall the Beatles. <<>>

Continuing the Liverpudlian influence is the following track, Blackberry Rain, that sounds like a song that might have been left off the White Album. Pete adds paisley-colored guitar effects, while the nonsequitor-filled lyrics are right out of the Summer of Love. <<>>

A gem of folk-rock revival is One Heart One Soul, a new original song that one could easily imagine Peter, Paul and Mary having sung at a peace rally. The Dixie Hummingbirds add a subtle but evocative contribution with their background vocals. <<>>

The album ends with another bit of sonic psychedelia, Sirens, inspired by a re-read of Homer's Odyssey. <<>> There's also another bit of classical purloining, with Pete Kennedy going out with a theme from Isaac Albeniz. <<>>

Life Is Large, the new CD by The Kennedys, the husband-wife team of Pete and Maura is a most-enjoyable recording that borrows a lot of influence from folk-rock and pop from the 1960s, but is also not afraid of adding some alternative rock sensibility. Though Maura does most of the lead vocals, the duo is especially adept with their harmonies, evoking the strong voice-blending tradition of 30 years ago, while Pete's excellent lead guitar shows him to be one of the best guitar janglers around -- except, perhaps, when the original article Roger McGuinn steps in for a guest shot. With guitars like the Byrds, lyrics and vocal harmonies like the Beatles and Peter, Paul & Mary, and a beat like the Gin Blossoms, the result is an album with multi-generational appeal. Even the cover art, with the CD booklet unfolding into a great 60s-style poster featuring Maura in a mod miniskirt, also ties in with the look of some current bands.

Sonically the album, though consistent given the variety of recording venues, won't get my audiophile prize. The main problems are the heavy compression on Maura's vocals as well as on the mix overall, and real drums that often sound like a drum machine. The electric guitar treatments are quite effective, though.

Pete and Maura Kennedy are usually considered a folk duo. But Life Is Large is a most entertaining album of appealing pop music, in the best sense.