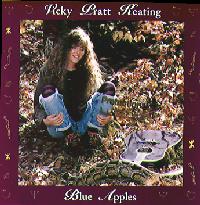 Not since the folk music boom of the 1960s have singer-songwriters been more abundant on the music scene than they are today. A good number of the pioneers from thirty years ago, from Bob Dylan and Joan Baez to Joni Mitchell and Jackson Browne remain active and doing good work. With the momentary commercial success a few years ago of artists like Tracy Chapman and Suzanne Vega, and the still active folk music and coffeehouse scene, singer-songwriters are proliferating. Perhaps even more notable is the number of genuinely fine artists who have come forth in the last few years. Some have already established reputations like John Gorka, Christine Lavin and Indigo Girls. But it seems that every month or so an outstanding debut album by a folk-influenced singer-songwriter will appear that not only leaves a fan enthusiastic about the discovery of such a new talent, but often downright amazed at how much depth this seemingly simple musical format can hold -- just how many ways there are of combining words and music usually with an acoustic guitar, and still sound fresh.

This week's album is yet another auspicious debut recording by a talented performer who does both aspects of the singer-songwriter role exceptionally well. Her name is Vicky Pratt Keating, and her new CD is called Blue Apples.

Ms. Keating has been performing in the Washington, DC, area for the past several years in a musical scene that has given us some outstanding people like Mary Chapin Carpenter and Pete Kennedy, who recently has been working with Nanci Griffith. In fact, Kennedy is on Blue Apples, as is Bob Read who has worked with Bruce Hornsby.

Vicky Pratt Keating's songwriting style combines attractive melodies with some very poetic lyrics that are artfully crafted and in the best tradition of literate folkies: often vague and cryptic in the way they address their subjects, including the perennial favorite, personal relationships. She can be reminiscent of Laura Nyro or early Joni Mitchell in the way she writes. She sings her songs in a bright, clear, very appealing voice that would make even lesser songs captivating.

For the most part, the musical setting on the album is what has come to be fairly standard for the new generations of folkies -- a tasteful mostly acoustic arrangement that still includes drums, bass and a little electric guitar. Adding a some musical spice to Blue Apples is the presence of the Irish Uillean bagpipes, played by Paddy Keenan of the Bothy Band, plus a little mandolin and a cameo appearance by a string section. Other regulars on the album include bassist Dennis Espantman, and drummer Robert Jospé. Pete Kennedy plays both acoustic and electric guitar, and Bob Read, who co-produced the album with Ms. Keating, plays keyboards. Ms. Keating is heard on acoustic guitar throughout.

Something I find interesting about this recording is that, despite Ms. Keating's literate and often lyrically elaborate style, most of the 14 tracks on Blue Apples are fairly short by current standards. She can say a lot in under four minutes, and still have a little room for an occasional guitar or other instrumental solo.

The album gets under way with one of its more straightforward songs, The First Exchange. It's an attractive, melodic piece that could make a good pop song, though its literate lyrics mark it as being the work of a folkie. <<>>

While the lyrics are sometimes complicated and the listener might have been helped by hints to help put what she says into context, many of the compositions are love songs in one form or another. A track called N.Y. 10/11/91 is one I interpret as a kind tale of unrequited love. A couple is together, he loves her, but she can't seem to warm up to him. The musical setting with two acoustic guitars brings Ms. Keating's clear, warm soprano vocal into focus. <<>>

Somewhat more electric in setting, and also in the lyrical category of a complicated relationship, in a piece called Those Voices. <<>>

Though today's new generation of singer-songwriters reflect contemporary influences, deep down, they draw on the groundwork laid back in the 1960s. With that in mind, I can't help but be reminded of Crosby, Stills and Nash's Wooden Ships in the musical mood set up on Vicky Pratt Keating's song Shoot for the Moon, though the lyrics having nothing in common. Again, the words are literate and ambiguous on the subject of personal relationships. Paddy Keenan's bagpipes make an appearance adding to the melancholy aura of the track. <<>>

One of my favorite pieces on the album is Boy with a Kite, which combines a bright pop tune with a slightly eclectic arrangement featuring violins and cellos. The lyrics are ostensibly about what the title says with the narrator in the song apparently having a crush on the kite flyer. <<>>

Ms. Keating's wordcraft reaches its height on a piece called Ice. It's another love song, but the way she expresses the notion is quite interesting, leaving one pondering and open to drawing various inferences. It again recalls the lyrical style of Joni Mitchell, in the context of another bright melodic songs. <<>>

The most elaborate composition on the album is called Buffalo, with lyrical images of the bison and Native Americans. The accompaniment includes an interesting blend of banjo for the frontier influence, plus the mournful chant of the bagpipes. <<>> The piece is given an instrumental reprise at the end of the album. <<>>

Washington, DC, area singer-songwriter Vicky Pratt Keating has made an outstanding recorded debut on Blue Apples. She combines a very appealing vocal style with literate, poetic, often ambiguous lyrics, which she puts in a musical context that is often cheerfully melodic. Added to the tasteful, mostly acoustic arrangements on the album, the result is the kind of record that makes a folkie fan's day. Every song on the album has something worthwhile to offer, and it's the kind of CD that can stand up to lots of listenings revealing something new each time.

Sonically, Blue Apples generally has a clean bright mix to match the music, but the record suffers from excessive audio compression -- the electronic squashing out of differences between loud and soft sounds. It's especially noticeable on the acoustic guitars and mandolin where it's likely to annoy audiophiles and for most other listeners impart an unnaturally processed sound to the supposedly non-electrified instruments. But that's not enough to detract significantly from the album's musical value.

Vicky Pratt Keating is an excellent new talent on the now-increasingly well-populated singer-songwriter scene, where this new album has shown her already to be a standout. And it's also a reminder of how much this seemingly simple musical format can offer, even after all these years.