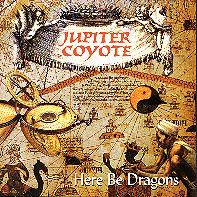 Sometimes it seems that rock styles never really go away. They may lie dormant for a few years, but as the 1990s has proven, chances are that some new bands will come along and revive the sound, often adding their own twist. Almost every style of the 1960s has found a younger band keen to bring it back to life, from Memphis soul to art rock to psychedelic. Southern Rock is a style associated more with the 1970s, and it too has seen quite a bit of activity among younger performers. While Gregg Allman and Dickie Betts have kept the Allman Brothers Band going and showed that they have't lost it, some of the best music in the classic style is now being made by such second-generation groups as the Freddie Jones Band, and the Hatters, who are from Chicago and New York, respectively, and from Georgia, The Grapes and Jupiter Coyote.

Jupiter Coyote's beginnings go back a long way. Guitarists, vocalists and songwriting collaborators John Felty and Matther B. Mayes grew up together in Brevard, North Carolina, where they met in first grade. After college, they moved to Macon, Georgia to be near the home of Southern Rock, where the Allman Brothers and the seminal label Capricorn Records called home. There they recruited drummer Gene Bass and bassist Sanders Brightwell. Their most recent addition was a new percussionist who joined the group last year, Robert Soto.

Jupiter Coyote are distinctive in a number of ways. Their sound has the hallmarks of Southern Rock, including lengthy jams in performance and on record, along with the light loping rhythms that marked some of the Allman Brothers' best work. But their music is a bit less bluesy and dependent on slide guitars than is typical for the style, and they often bring acoustic guitars into the mix, sometimes bordering on being folky. And while their music is very much guitar-based, long guitar solos are largely absent. Instead, the arrangements rely more on the structure of the songs and the exchange among the members of the band. Another interesting facet is Matt Mayes occasional use of an instrument he calls the "guitjo" consisting of the body of an electric guitar with the neck, and presumably stringing of a banjo. And the band also chose to go it alone in the music business, founding their own record company, the aptly named Autonomous Records, which has grown to the point of signing some other artists, being distributed by a larger national label, Roadrunner.

Two years ago, Jupiter Coyote released the excellent Lucky Day produced by Johnny Sandlin, who produced the Allman Brothers Band and other artists for Capricorn Records. Last year the group issued Ghost Dance, which seemed to fall somewhat short of the previous album's strength. Now they are out with Here Be Dragons, which the band produced themselves, in what used to be the Capricorn Recording Studio, and have come up with one of their best efforts yet. The album emphasized the group's strengths, including tasteful musicianship honed from constant live performances, plus good songwriting and a combination of the evocation of classic Southern Rock influences, along with their own take on the style. The result is an enjoyable album of music that's not particularly deep, profound or startlingly original, but makes great, rhythmically contagious listening that distills the best parts of classic Southern rock while discarding the excesses and some of the musically rough edges. And one of Jupiter Coyote's strengths is their particularly melodic songwriting.

The album gets under way with one of the songs that reflect that facet of the group, Every Time, combines an appealing melody, jangly acoustic guitars, plus the airy but vaguely funky rhythm that its Jupiter's specialty. Matt Meyes plays his guitjo. <<>>

That is followed by a song called Seven Canadas Geese, whose lyrics are brimming with rock-song clichés, but are nonetheless pleasant, and mainly provide an excuse for some tasteful instrumental jamming. <<>>

One of the lengthier tracks providing an opportunity for the band to stretch out is Words, which features a guest vocal appearance by fellow Autonomous Records artist Beth Wood. Though the tune is not as interesting a composition musically as others, it provides the band with an opportunity to break into some good instrumentalizing. Interesting, though, is the fact that the solos are not very long. Just when you think Jupiter Coyote is going to break into a long instrumental jam, they go back to another verse of lyrics. <<>>

One of the highlights of the album is a piece called I Know Nothing, which again features Beth Wood. It also gives the band a chance to jam a bit between vocal sections. Like many of Jupiter Coyote's compositions, there are a distinct sections in this piece with different sounds.

The group's melodic side comes out especially well on Ship in the Bottle, a nicely crafted song showing the Mayes and Felty's strong joint vocals. <<>>

Jupiter Coyote's funkier side is represented on Rose Hill which features guest appearances by Edwin McCain and Count Mbutu, the latter from the Aquarium Rescue Unit band, on percussion. <<>>

The album ends with two overlapping pieces. Rain, not to be confused with the Beatles' song of the same name, features some of the album's most intelligent lyrics in another well-crafted song that combines melodic aspects with interesting changes of mood. <<>>

That segues into Better, a slow atmospheric, mostly acoustic track that shows yet another facet of the band. <<>>

There are quite a few younger bands taking up the banner of classic Southern style rock, in the Allman Brothers, Marshall Tucker, Lynyrd Skynyrd tradition. Jupiter Coyote, from Macon, Georgia, is one of the best. On Here Be Dragons, they combine first-rate musicianship, good writing, and a sense of taste that allows them to avoid some of the excess of Southern Rock of the past. Even though these guys can jam, they keep musical variety happening, and they combine a flair for melodic songwriting that was rare in the Southern Rock of old.

The album's production is first-rate, capturing a nice compromise between studio sheen and group's tendency to jam. Sonically, the CD boasts an excellent mix, with the instruments and vocals nicely recorded. But that mix is undermined by too much compression in the mastering, robbing the music of dynamic range, especially in the drums and percussion.

While innovation in music can certainly make for interesting listening, sometimes a good group making music particularly well in a familiar style can be just as rewarding. Jupiter Coyote have done that on Here Be Dragons. For the fans of classic Southern Rock, or for those young enough to find the style new and cool, this CD provides some very pleasing listening.