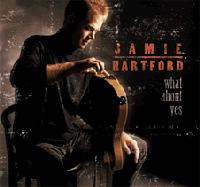 Jamie Hartford: What About Yes -- by George Graham

There are plenty of examples of music running in the family: second generation performers who follow in their mother or father's footsteps. Sometimes the son or daughter takes a very different stylistic path than the parent, and sometimes it goes so far as the offspring playing in the parent's band.

This week we have a second generation performer who veers somewhat from his father's musical direction, but not by a lot. It's the new debut album by Jamie Hartford entitled What About Yes.

Jamie Hartford is the son of John Hartford, the talented songwriter who achieved fame in the 1960s for writing some of Glen Campbell's big hits. From the early 1970s, the senior Hartford established himself as one of the leading proponents of an eclectic blend of country, bluegrass, and rock, with the emphasis on the more traditional side of country and bluegrass. Son Jamie at first eschewed a career in music, having been turned off by what is described as the "less-friendly side of the business." But eventually, he started playing in all manner of cover bands, travelling around the US and Canada. His father encouraged his songwriting by offering Jamie $25 for every new song he turned in. The younger Hartford says of the arrnagement with his dad , "He finally got tired of me handing over a wad of songs every time I needed some spending money."

Jamie Hartford eventually began working with veteran Nashville producer and songwriter Jack Clement, with whom his father often collaborated, with Jamie being invited to play guitar on sessions and otherwise contribute to Clement's projects. The younger Hartford also toured with his father, with John Prine, and substituting for guitarist Albert Lee with the Everly Brothers, before setting off on his own, forming a band to do his own music. The band has become a regular on the Nashville club scene in recent times, playing a hybrid of rockabilly, blues, and straight rock & roll, with some lyrically interesting material typical of folky singer-songwriters. The result is an album that is almost a party record in sound, but one that also provides you with something to think about. The playing by Hartford's band is first-rate and the songs are definitely worthwhile.

In Hartford's band are rhythm guitarist Ray Flacke, bassist Charlie Chadwick who plays mainly acoustic bass, drummer Rick Lonow, and harmonica man Paco Ship. Also appearing on What About Yes are guitarist and songwriter Pat McLaughlin, and Amazing Rhythm Aces bassist Jeff "Stick" Davis. Hartford has a vocal drawl reminiscent of James McMurtry, and his songwriting style has been compared to that of J.J. Cale. His tight little group is a regular band, rather than just a singer-songwriter with backing musicians, and they play rock & roll with a great combination of energy level and laconic understatement.

The album starts off with a track typical of Hartford's spirited bluesy rockabilly blend, Somebody's Gonna Pay, which, according to the songwriter was lying around for a long time incomplete. The harmonica player, Paco Ship, kept after Hartford to finish the song, since it was fun to play on. In addition to the somewhat jaundiced lyrics, the songs provides a vehicle for three solos, including the harmonica. <<>>

Of the title track, What About Yes, Hartford said it was inspired by his three-year-old daughter. He writes, "As a parent you are always having to say 'no honey, you can't do that.' Now and then she would look at me and say 'But what about yes, Daddy?'" He borrowed the phrase and applied it to various other situations in this distinctly bluesy tune. <<>>

A different side of Hartford and band comes out on the more mellow track Good Things Happen (When You're Around). This positive love song shows that the band can handle the slower tunes with equal aplomb. <<>>

One of the more appealing of the rockers, lyrically, is Hard Hard World, which focuses on the daily routine of life through a series of little vignettes, which Hartford calls "snapshots, really, so that instead of me laying out a specific story, everyone can catch a little something they recognize and paint their own picture." <<>>

There are a couple of covers that Hartford and band do, including Baby Is Gone, a song by Hartford mentor Jack Clement. Hartford writes that after doing his own take on the song, including altering the melody slightly, Clement insisted that Hartford record a version with the music exactly as he wrote it, just for Clement. The album version is Hartford's alteration, and the band does a nice, tasteful job. <<>>

The other cover is a song by the late Steve Goodman called Lookin' for Trouble. Hartford has great praise for the song and Goodman in his notes. The band does it as a slow blues and with Hartford's slightly sardonic-sounding vocals, the result is highlight of the album. <<>>

Hartford takes a more serious lyrical tone on his song Cold and Hungry, which considers the plight of the homeless, and how a great number of people are, in his words, "one missed insurance premium and one accident away from losing everything." <<>>

Another of the album's more appealing rockers is You're Secret's Safe with Me, which was inspired by seeing a woman moving into an apartment building after obviously having packed in a hurry, leading him to believe there was a story behind that. <<>>

The album ends with an instrumental by Hartford called Venus Fly Trap, which he said was originally written at a much faster tempo, but members of his band suggested he try at a slower pace, reminiscent of the old guitar classic Sleepwalk. <<>>

Jamie Hartford's new release What About Yes is an album that combines a great rock, blues and rockabilly spirit with the literate approach of a good singer-songwriter. His first-rate songs, great tasteful band and somewhat laconic vocal delivery make this a multi-faceted record, a party album with thoughtful lyrics. Hartford does not exactly follow in his father John's stylistic footsteps, but like his dad he calls Nashville his home, and keeps a bit of the city's sensibility in his music. His group has rightly been attracting a lot of attention as one of the bands to see on the contemporary Nashville club scene, which has given us groups like BR5-49. Now his music is available on record, and it's a worthwhile addition to the broadly named roots-rock genre.

From a sonic standpoint, the album is decent but not exactly audiophile. Everything is where it should be in the mix, but the minimal stereo spread is a bit disappointing, and the recording was compressed a fair amount in the mastering. It's classic-style style rock & roll, so some such things can be forgiven.

Overall, Jamie Hartford's new release What About Yes, marks an impressive debut by another second generation artist whose music very much stands on its own.