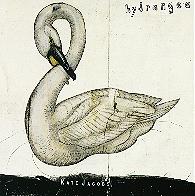 With worthwhile singer-songwriter albums proliferating, it is getting to the point that merely good songs and good vocals are not always enough to make a record stand out. Sometimes it takes an artist's distinctive style or songs that are really memorable, or sometimes it's an interesting combination of factors. This week, we have an album that falls into the latter category. It's Hydrangea, the third full-length release by New Jersey-based Kate Jacobs.

Kate Jacobs has an interesting background. Born in Virginia, she is the product of a family which farmed the same land in the Hudson Valley in New York for over 200 years, with another branch coming from Russia. Ms. Jacobs herself started out intending to be a dancer. At an early age, her family moved to Europe, and she spent most of her childhood there. She studied ballet in England and France, but eventually returned to the US, settling in Hoboken, NJ, where she decided to take up songwriting. She has since been honing her skills, with her two previous albums, The Calm Comes After and What About Regret each winning a fair amount of critical praise.

For her new album, Ms. Jacobs turned to her rich family history for her inspiration. Her great-grandfather was a doctor who fled Russia during the Bolshevik Revolution and came the US. While in Russia, he was friends with Anton Chekov and his one of his patients was Leo Tolstoy. She had an uncle who was a painter from Manhattan who was attracted to the idealism of the Spanish Revolution and ended up dying on battlefield. These people are woven into the fascinating collection of music which comprises Hydrangea, songs were inspired by finding diaries, paintings, photographs and letters in the attic of the family homestead some going back to pre-revolutionary Russia. But there are also some more personal observations on relationships in the 17 pieces which comprise the album, ranging from short vignettes to genuinely intriguing stories, including one based on the diary one of Jacobs' physician great-grandfather's patients, a dying young girl who was a secret admirer.

Ms. Jacobs herself brings a distinctive style combining her high, almost cherubic vocals with a bouncy pop-rock sensibility, though the arrangements also include three pieces sung by children's choruses.

Joining Ms. Jacobs on the album are multi-instrumentalist Dave Schramm, who has recorded with groups like the Replacements, Yo La Tengo and Soul Asylum; bassist James MacMillan, who also arranged the children's choruses, drummer Alan Bezozi, and organist Peter Holsapple. Guest backing vocalists include Susan Cowsill of the old Cowsills band and Vicki Peterson of the Bangles.

After a short opening sound-effect sequence, the album gets under way with Shallow, an outwardly attractive pop song that makes allusions to bits of family history that come out elsewhere on the album, even though the song itself does not seem focussed in that direction. <<>>

Another facet of the album comes out in the short, lullaby-like song Late, with Ms. Jacobs' vocal nicely fitting the mood. <<>>

Bits of the Jacobs family history come out in Honeybees, one of the more charming songs on the album, with hints of country influence. <<>>

A Snowy Street was also woven around documents Ms. Jacobs found, in this case about her physician grandfather. The doctor was quite young, and perhaps feeling somewhat inexperienced when asked to deliver the baby of a Russian woman. The father had already left her. <<>>

Dream On features the school chorus in this set of somewhat philosophical lyrics. The result is quite charming. <<>>

Good Doctor was based on the diaries of a fourteen-year-old tuberculosis patient named Ellen who was being treated by Ms. Jacobs' great grandfather in pre-Revolutionary Russia. Ellen, who may or may not have survived her illness, had a great crush on the doctor. <<>>

A track called Can You Promise? is a love song possibly based on Ms. Jacob's spread-out family. It has to do with introducing one's lover to one's family in a distant land. <<>>

One of the most memorable sets of lyrics comes on Eddy Went to Spain, based on the true story of Ms. Jacob's idealistic artist uncle who to went to Spain in the 1930s to fight fascists in the Spanish Civil War, and died on the battlefield. The upbeat pop arrangement is a deceptive contrast to the lyrical direction. <<>>

A more laid-back acoustic sound provides the setting for Stole the Madonna lamenting the loss of an old familiar religious statue around by someone who considered herself a non-believer. <<>>

Another highlight among the upbeat songs is Hope Is a Weed, which though not directly related to Ms. Jacob's family history, reflects on relationships through the metaphors of a garden and finding a sick baby bird there. <<>>

The album ends with another of the tracks featuring a children's chorus, a three-part song called Because I Have Forgiven Everyone, a longer version of a short piece heard earlier on the album. Unlike the other choral tunes, Ms. Jacobs joins in on this one. It's enjoyable but perhaps one too many with the slightly out-of-tune kids singing. <<>>

Kate Jacobs' new third album Hydrangea stands out among the wealth of singer-songwriter records for its downright interesting material, much of it based on the artist's family history. She's a charming singer, who shows her intelligence and draws insight from the events she relates. For my taste, the arrangements might have tended more toward acoustic instrumentation, which would have allowed her to deliver her wordcraft more effectively, but a lot could also be said for the contrast between the frequently upbeat pop arrangements and the sometimes ruminating lyrics. The musicianship by all is quite tasteful.

Sonically, the album is quite listenable but not exactly audiophile. The mix is good, but sound of the some of the instruments could have a bit more clarity, and compression in the mastering process robbed the recording of some openness and dynamic range.

On Hydrangea Kate Jacobs has established herself as a significant and distinctive singer-songwriter who has done an effective job of creating a suite a songs that touch on an interesting family history, in an attractive roots-rock influenced setting.