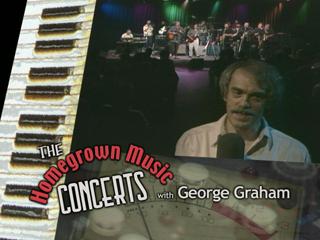 After over more than a quarter-century on Public Radio, the Homegrown Music series has become a regular feature of Public television (WVIA-TV/44) in a weekly series, videotaped a monthly live radio concerts on WVIA-FM. No fancy or pretentious music video effects, just great performances captured live as broadcast on the radio.
The Homegrown Music TV series is currently on hiatus on WVIA-TV, but episodes from series 11 and 12 are available on demand.

Series 10
In High Definition, with some programs in Dolby Suround.
Series 9
Series 7
Series 6

#607: Dave's True Story. This nationally-acclaimed group founded by Dave Kantor and Kelly Flint defies ready categorization. Their music is jazzy and often very witty lyrically, with Ms. Flint serving as the perfect chanteuse but they have been finding receptive audiences on the folk music scene. With several CDs under their belt, their Homegrown Music performance shows the group's critical acclaim is well-earned. (Recorded April 12, 2004)