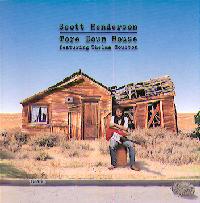 One of the distinguishing features of the blues is its deceptive simplicity. Most blues songs are, on paper, very uncomplicated pieces of music -- often three chords and a simple, repeating structure. But of course, the art comes in the execution.

Jazz, as a music form, owes much to the blues, though musical complexity is one of the hallmarks of modern jazz. Jazz musicians do often play the blues, but just as often delight in performing compositions with lots of interesting musical content.

On the other hand, jazz-rock fusion, as it has evolved since the 1970s has always revelled in the complex, harmonically dense or rhythmically intricate, with instrumental virtuosity being an important element in the style. So a fusion between fusion and the blues is a bit out of the ordinary. There are not very many performers who can pull it off well, with Larry Carlton and Robben Ford being two of the relatively few who come to mind.

This week we have album which takes the concept of mixing the simplicity of the blues with the complexity of jazz-rock fusion to a whole new level. It's by Scott Henderson, and it bears the title Tore Town House.

Scott Henderson is one of the most respected jazz-rock fusion guitarists in the business. As a stylist, he is definitely in the guitar-slinger category, someone who plays with the energy and pyrotechnics of rock, but with the solid technique and improvisational "chops," as they say, of jazz players. For the past few years, Henderson and bassist Gary Willis have had a group called Tribal Tech, which has attracted a great number of fans, especially among guitar players. Now, Henderson, who would occasionally bring a little blues influence into Tribal Tech, has wholeheartedly turned his attention to the form with the seeming goal of trying to reinvent it, with fascinating results. Instead of performing with his regular Tribal Tech band, he gets together with a somewhat different set of musicians, including bassist Dave Carpenter, plus keyboard man Scott Kinsey and drummer Kirk Covington who have worked with Henderson in Tribal Tech, along with R&B great Thelma Houston, another blues singer named Masta Edwards, blues harmonica player Pat O'Brien and a horn section. A reading of the credits suggest it might be a great straight blues session. But instead the material is anything but three-chord blues. Henderson applies all the harmonic tricks of fusion, plays some virtuosic lead guitar, and is constantly throwing curves, frequently taking tunes off in unexpected directions like unusual chord sequences or even changes in time signature. To top it off, some of the lyrics are tongue-in-cheek, such as a very sincere-sounding duet by two people singing about how they can't stand each other.

This is not an album for the blues purist. But those who enjoy good fusion, and fans of electric guitar fretwork prowess will find much to be impressed by on Tore Down House. Though Henderson is known as an instrumental artist, the performances by Ms. Houston, especially, are exceptionally fine and add much to the CD. But probably the most distinctive aspect of the album is the way Henderson juggles the seemingly contradictory goals of the blues' directness and fusion's musical circuitousness.

Henderson himself, is a worthy recipient of the reverence in which he is held by legions of guitar players and fans. He can, and often does dazzle with his technique, but he is also a very tasteful player who isn't constantly seeking the spotlight. Probably as important as his technique are his musical ideas, which manifest themselves through the album's compositions and arrangements, as well as what he plays in his solos.

Tore Down House begins with a first-rate funky blues-rock instrumental called Dolemite. Keyboardist Scott Kinsey gets a good workout on the organ, while the horn section provides some nice musical accents. <<>> Interestingly, when Henderson's solo comes along, he assumes a mote laid-back mood that emphasized his more tasteful side. That doesn't stop him from tossing off some hot licks almost nonchalantly. <<>>

Another of the album's highlights is its title piece Tore Down House, with a vocal by Thelma Houston, who puts in an excellent performance. Henderson's tune, thought outwardly bluesy, is full of the harmonic twists and even shifts in time signature one associates with fusion. <<>> Henderson's guitar sound recalls Jimi Hendrix at his most mellow, though in terms of musical content and technique Henderson, like many of his contemporaries in the fusion world, is a far better musician than Hendrix ever was. <<>>

Also on the blues-rock side is a tune called Xanax, also sung by Ms. Houston. The arrangement is just a power trio with bass and drums, while Henderson set off some of his rock guitar pyrotechnics. <<>>

There are two pieces with fun, tongue-in-cheek lyrics. The most hilarious is I Hate You, done as a vocal duet with Ms. Houston and Masta Edwards. It's done as a schlocky R&B ballad with the two singers, instead of expounding upon how much they love each other, proceed to trade insults throughout the song. <<>> Even Henderson gets into the act with his dippy guitar solo. <<>>

That is followed with Gittar School, sung by Edwards, which pokes fun at Henderson's profession. The song essentially says that if you're too dumb to do anything else, learn to play guitar and become a star. The arrangement, however is outstanding. It's the closest thing to straight blues on this musically circuitous album. <<>>

Speaking of circuitous, one of the most remarkable of the album's tracks is Continuum, which starts with a kind of acoustic swamp blues with Latin percussion <<>> and ends up in a kind of laid-back jazz groove with the horn section. <<>>

Another song with whimsical lyrics is Meter Maid, about being in love with a parking law enforcer. The tune is built around the classic Bo Diddley beat, while it gives Henderson an opportunity to show off more of his rock side. <<>>

Tore Down House ends with a more or less straight R&B style song, Same As You again sung by Ms. Houston, whose fine performance tends to eclipse the worthy musicianship by Henderson and his instrumental colleagues. <<>>

Scott Henderson, on his new album Tore Down House comes up with a fascinating blend of the blues, which is basically a simple and straightforward form of music, with jazz-rock fusion, which has its genesis in complexity and instrumental virtuosity. The record combines outstanding musicianship -- not only by the players, but by the vocalists, especially Thelma Houston -- with a lot of creativity in addressing the combination of the seemingly conflicting genres. It's blues with an interesting twist, plus enough guitar acrobatics to keep the most jaded fret fan absorbed. Rock guitar fans, especially, will find much to delight and even amaze them, for the album's sheer creativity.

Sonically, Tore Down House is rather well done. The overall mix captures the spirit of the music, and generally the sound is quite good. But there are little bothersome things like needlessly noisy guitar amplifiers intruding in quiet fade-outs, a mysterious faint but audible high-pitched whine on the title track, bit too much effects on the vocals at times, and a little unevenness among the parts of Kirk Covington's drum kit. Those are not likely to draw a complaint from most listeners, but this is the kind of album whose every note is likely to be studied under a microscope by many a guitarist, so any imperfections are sure to be noticed.

Scott Henderson, after spent the past few years blazing fusion trails with his band Tribal Tech, blazes a few more by shaking up the blues on Tore Down House. The result makes for exciting and musically rewarding listening.