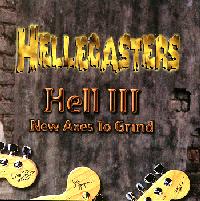 Despite all the inroads made by everything from synthesizers to didgeridoos, the electric guitar remains at the center of rock music. From rockabilly twang to searing blues to alternative grunge to jangly folk-rock to heavy metal pyrotechnics, the manner of playing the electric guitar in large part defines the style in music. Not surprisingly, there is a long history of electric guitar instrumental music that has bordered on mass popularity. This week we have another rock electric guitar album, and this one is a combination of virtuoso showpiece and party record. It's the third and latest by the West-Coast trio the Hellecasters entitled New Axes to Grind.

If one could be allowed to look at such things psychologically, an electric guitar can be a kind of macho thing. You plug it in, crank it up and can't help but become the center of attention. And if you get two rock lead guitarists in the same room, chances are they are going to do the macho thing and compete with each other. And when you have three, things can quickly get out of hand: witness the interminable three guitar jams of such Southern rock bands as the Outlaws, Molly Hatchett and yes, even Lynyrd Skynyrd's famous guitar endurance test Free Bird.

The Hellecasters are three lead guitarists, who each have their own separate reputations as group members, studio musicians and touring players working with some of thr top stadium acts. John Jorgenson is a versatile and ubiquitous studio player who three times received Academy of Country Music's guitarist of the year award. He has been heard on record with Bob Seger, Bonnie Raitt, John Prine, Bob Dylan, Roy Oribison and the Sir Douglas Quintet among others. Recently, he has been touring and recording with Elton John. He also recorded a wonderful acoustic jazz album in the style of Django Reinhardt several years ago.

Virginia native Will Ray has been playing country-influenced music in the Los Angeles area for some time now, also winning a guitarist of the year award, from the California Country Music Association. His resumé includes stints with such diverse performers as Joe Walsh, Tom Jones, Thomas Dolby and Carlene Carter, among others.

The remaining Hellecaster is Jerry Donahue, an interesting figure who, though born in the US, was raised in England and became part of the British folk-rock scene, replacing Richard Thompson when the latter departed Fairport Convention. He has worked with such artists as Elton John, George Harrison, Joan Armatrading and Gerry Rafferty.

All are remarkable players with formidable technique and a reputation for their own stylistic innovations. Normally, if you put three such people in the same room, you might expect a guitar shootout. While they do trade solos on a regular basis, one of the Hellecasters' most salient features as a group is their ensemble playing. They really supplement each other well on the guitars. This may have something to do with the fact that all work as hired hands, adding their own guitar touches to somebody else's music. So they know when to step forward, and when to play for the benefit of the arrangement.

This third album, New Axes to Grind, their first in nearly three years, continues the group's combination of guitar ballistics and good fun. The name Hellecasters, as any electric guitar player can deduce, is a takeoff on the name of the type of guitar they favor, the solid-body Fender Telecaster, with its famously twangy sound. Though they all now play custom instruments, that Telecaster twang is never far from the center of their music. The new album features a rather varied blend of different influences, with composing contributions from each of the guitarists, and as a Hellecasters first, a joint piece by all three.

While the Hellecasters continue to create some great arrangements for their guitars and the interplay can be fairly impressive, the liner notes indicate that each guitarist recorded his parts separately in their respective studios. The liner notes also allude to the pressure of time and deadlines for the making of this CD, so it's likely that their respective busy schedules reduced the amount of actual contact among the three guitarists. So compared their last album Escape from Hollywood, there seems to be a bit less cohesion, but it's a subtle thing. Also appearing on much of the album are the rhythm section of Dennis Belfield on bass and Steve Duncan on drums.

While the material runs from rock & roll to Celtic to Middle Eastern in influence, that twangy rockabilly guitar sound is never far away from the Hellecasters, and despite all the impressive guitar work, they are not above some cornball guitar noises here and there.

The album opens with what they describe in the liner notes as the first Hellecasters "tri-written song," called T.W.P.P.T. Will Ray's notes go on "We all had unfinished song ideas, patched them together and created our own personal Frankenstein." One can hear where one guitarist's contribution ends and the next begins. Still, it's definitely a guitar fan's delight. <<>>

Following is one of Jerry Donahue's pieces, Riddler's Journey. As usual, the Hellecasters take turns soloing without losing sight of the overall composition, which Donahue said he was writing right up to and during the recording sessions. <<>>

Though it's John Jorgenson who has played swing-style jazz, Will Ray wrote the tune called Ghosts of 42nd Street, which is meant to recall the music of the swing-era jazz clubs. It becomes one of the album's best tracks, with tasteful soloing and great, tight ensemble playing by the three guitarists. <<>>

There are two tracks on this CD which feature just a single guitarist. Almost Dawn is by Jerry Donahue, a tune he write in the early 1970s, which has seen several recordings as a vocal. Here it is done as a relatively laid-back instrumental. It gives us a chance to hear what Donahue can do on his own. <<>>

John Jorgenson got the inspiration for Mist Beyond Delhi from a trip to Malaysia where he heard Asian fusion pop and was intrigued. There's a bit of that Eastern tonality woven into the piece, but there is a helping of Nashville. <<>>

The other track featuring just one of the three Hellecasters is As We Know It, by Jorgenson. He describes the tune's genesis as coming from imagining the sound of "an Irish singer singing in the Scottish Highlands." He concedes that it isn't the way it turned out. It reminds me of psychedelia. Though the guitar soloing is impressive, the piece was created by Jorgenson by himself with a drum machine and it sounds it. It's one of the few instances where the soloing on the album borders on noodling. <<>>

No Hellecasters album would be complete with a twang-fest, and Will Ray's Mad Cows at Ease, fills the bill nicely. There's some great playing by all three, with the mood definitely lighthearted. <<>>

The album ends with Jerry Donahue's Breaking Through, the CD's lengthiest track, which is also a pastiche of influences and styles, from almost surf <<>> to a bluesy shuffle, something of which there is surprisingly little on this album. <<>>

John Jorgenson, Will Ray and Jerry Donahue, collectively known as the Hellecasters, have created another impressive rock guitar instrumental album on their third release New Axes to Grind. The three guitarists prove that they can play together, with each one distinguishing himself without getting in the other's way, or turning it into a long multi-guitar jam. Their sense of ensemble playing is almost as notable as their individual soloing. But, because of the way this album was recorded, with the individual guitarists in their separate studios at different times, apparently because of schedule considerations, I don't think this is quite at the level of their last album Escape from Hollywood. Despite this album's variety of influences, its predecessor was a bit more eclectic and there was better cohesion among the guitarists. Still, if you are a fan of hot rock guitar, with a good helping of twang, you can't get much better than the Hellecasters.

From a sonic standpoint, this album brings no complaints from me. It's rock & roll, and studio skulduggery is part of the genre, but it's tastefully done and rewards the use of a good stereo system.

There's nothing more basic to rock than an electric guitar, but the Hellecasters are anything but basic.