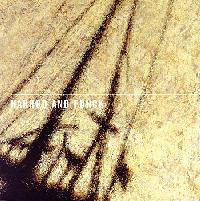 Harrod and Funck -- by George Graham

Folk-singer duo acts have been around for a long time, going back to the Smothers Brothers, Simon & Garfunkel, Brewer & Shipley, Loggins & Messina, Seals & Crofts, Batdorf & Rodney, England Dan & John Ford Coley, and more recently, the Indigo Girls, Lowen & Navarro and The Kennedys. This week have a new recording by yet another outstanding duo, Harrod & Funck.

Jason Harrod and Brian Funck, both in their mid-20s, first met in the fall of 1990 where they heard each other at an open mike event in Chicago. Harrod is originally from Durham, NC, while Funck is a native Chicagoan. They soon hit it off, and began collaborating in songwriting. When they decided to try to make a go of it as a full-time pursuit, they moved the Boston area with its active folk club scene. But they also took their music literally to the streets, playing as street musicians and during the winter months performing in subway stations, where they began to develop a following. A couple of years ago they made their debut album Dreams of the Color Blind on the West Coast with the late songwriter Mark Heard serving as producer.

Now they are out with another independently-released recording simply entitled Harrod and Funck.

The division of duties between the members of duos varies greatly. Paul Simon wrote all the songs for Simon & Garfunkel. Amy Ray and Emily Saliers of Indigo Girls each write about the same number of songs that they both perform, but they never write together. According to the credits on their new CD, Jason Harrod and Brian Funck jointly wrote all the original songs. Some feature a lead vocal by one and some by the other, so perhaps Harrod and Funck work like Beatles' Lennon & McCartney and credit all the individual compositions to the both. But Harrod and Funck definitely work well as musical team. Their compositions are marked by especially fine lyric writing with excellent wordcraft, plus the kind of first-rate harmonies one would expect from a top-drawer folkie duo. They are also tasteful guitar players and serve as multi-instrumentalists on their CD.

Although the music is classic singer-songwriter fare in overall direction, the album has a rather contemporary electric sound with sleek, atmospheric-sounding electric guitars taking center stage in the arrangements for much of the record -- though there are also a few acoustic tracks. Additional musicians include Ric Hordinski who played further guitars, plus keyboards and bass, and produced the CD. Also appearing are Brahm Sheray on bass and three different drummers who alternate among the songs.

Harrod and Funck favor lyric topics away from the pop and even singer-songwriter norm. The album contains relatively few of what could be interpreted as love songs. Instead there are some obliquely-told stories about, for example someone fleeing a murder charge, a young man who runs away from it all into the wilderness and fails to survive, and some more impressionistic sets of words that leave much to the imagination or the interpretation of the listener.

The liner notes fail to say who sings which lead vocals. Their voices are distinctive with one being more gruff and edgy, with the other having a more laid-back quality, but those of us who have never heard the pair before are left guessing which one is Harrod and which voice belongs to Funck.

The album begins with a piece called 39, one of its more contemplative arrangements but with ironically one of the weakest vocal performances. <<>>

Following is a piece more typical of the album, Ashes, with the other member of the duo doing the lead vocal. The composition is also a good example of Harrod and Funck's often intriguing wordcraft in this oblique song presumably about personal relationships. <<>>

One of the more distinctive sets of lyrics comes on Brian Wilson's Room, which may or may not be about the often-troubled Beach Boys founder. <<>>

One of the story songs is Molly, done as a classic-style folk duo arrangement with acoustic guitar. The subject is the wife of someone who apparently has committed a murder in a situation that got out of hand, and now is preparing to flee his family as a fugitive. <<>>

Another sad tale woven around a death is Walk Into the Wild, about a young college graduate who decides give it all up, go north to Alaska to live in the woods, and doesn't make it. <<>>

Another highlight of the album among its more electric tracks is All Fall Down, featuring the duo's combination of intriguing lyric writing with attractive arrangements and harmonies. <<>>

Wind in the Net is another of the group's more unusual sets of lyrics, in which the protagonist's late grandfather's passing is lamented, leading to imagined sightings. <<>>

The album ends with Worry Too Much a song by the late Mark Heard, who produced their first release. The song is in a rather different style than Harrod and Funck's own material, and although the song itself is a good one, the track is hardly the album's best performance. <<>>

Harrod and Funck the new second album by the young Boston-based pairing of Jason Harrod and Brian Funck, is an worthy addition to the great tradition of singer-songwriter duos. They combine excellent lyric-writing with appealing vocal harmonies and tasteful arrangements that enhance, rather than distract from their songs. It's intelligent music for the fan who prefers thoughtful, durable music over instantly disposable pop.

From a sonic standpoint, the album was generally well-done. The producer, engineer and mixer was Ric Hordinski, who recorded the CD in Cincinnati, interestingly enough. Unfortunately, as is too often the case, audio compression was added in the mastering process and that robbed the CD of some of the dynamic range which would have made this a better listening experience.

Whether Harrod and Funck will become another Simon & Garfunkel or be more like another Batdorf & Rodney in their popularity, time will tell. They have already been attracting a lot of attention, breaking attendance records at a recent CD release party at a folk club in Boston. They certainly have what it takes musically to become significant figures on the folkie-duo scene. I hope that their self-distributed CD comes to the attention of wider audiences.