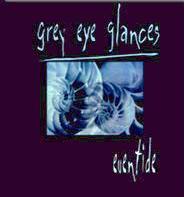 In the midst of a pop scene dominated by grunge, dumb dance tunes or schlocky over-produced easy-listening singers, there has been a bit of a trend over the past few years, for intelligent rock bands with a woman lead-vocalist doing fairly laid-back music that manages to avoid being too sweet. It probably started with 10,000 Maniacs, and includes groups like the Innocence Mission, Cowboy Junkies, Everything But the Girl, the October Project, and the group we featured just two weeks ago, the Dear Janes.

This week, we have another such band who combine a mellow sound with thoughtful writing and tasteful musicianship in a style that is not terribly far from contemporary mainstream pop. The New-Jersey-based trio call themselves Grey Eye Glances, and their new CD is entitled Eventide.

Grey Eye Glances, who take their name from a line in a poem by Edgar Allen Poe, has an interesting background. They were long-time friends who never really intended to form a band. Keyboard man and principal composer Dwane Keith and bassist Eric O’Dell first met at age twelve in elementary school as members of opposing street hockey teams. Vocalist Jennifer Nobel met Keith in high school when she tried out for school choir. Keith had a background in classical music, while O’Dell played trumpet for years in school bands. In high school, Keith played in a group called Cenozoic that he characterized as a flamboyant art rock group. O’Dell played in a blues band, which defeated Cenozoic in a high-school battle of the bands contest.

While they went to different colleges -- Rutgers, Temple and Bucknell -- they remained in touch, with O’Dell occasionally joining Keith playing music on campus. In college, Keith was moving away from his high-school ambition to make a career out of being in a rock band, and viewed his songs more as something just for personal satisfaction. But Ms. Nobel, who describes herself as Keith’s biggest fan, convinced him to start recording demos of his songs, and he eventually convinced her to sing, which she had never considered doing in public.

By the beginning of 1992, the trio decided to play a gig in New Hope, PA, where they figured they were far enough away from home that they wouldn’t be embarrassed if it went wrong. It became a regular Monday night affair, and that led to their recording their own independent release in 1993 called Leaving, which they followed up the next year with Further On. Meanwhile, O’Dell was working at a Borders Bookstore in Marlton, NJ, near Philadelphia. The chain had just started to bring bands in to play in their stores. So Grey Eye Glances became regulars there, building a good following, and eventually doing an extensive tour of the bookstore chain, rather than playing more conventional venues.

The group was signed to Mercury Records, based in part on their unconventional performance approach, and grew to include other members, including guitarist Brett Kull and drummer Paul Ramsey of the unfortunately now-defunct art-rock group Echolyn. Also playing with Grey Eye Glances on their new CD are John Avarese on additional keyboards and Bill Belcher on acoustic guitars.

Eventide was recorded in Nashville and produced by Glenn Rosenstein, who also produced the first October Project CD, as well as Echolyn’s As the World. The result is an enjoyable recording that combines good songwriting, Ms. Nobel’s wonderfully clear voice, and a mellow, attractive sound that nevertheless contains hints of Keith and the Echolyn members’ art rock tendencies. Lyrically, the material is distinctly poetic. If there is one word that sums up the emotions expressed in the album’s words, it’s “longing.”

The group’s background as a trio comes out in some of the songs’ arrangements built around a drum machine rhythm, but that ironically also gives it a more commercial mainstream sound. Otherwise. the textures run toward the spacey guitars and synthesizers and focus on Ms. Nobel’s fine singing. There is also a tastefully subtle string section which appears on a few songs.

This generous 62-minute CD begins with one of its best sets of lyrics. Hard is an upbeat song I interpret as being about a friend given to substance abuse. <<>>

With the drum machine and a more pop-influenced sound is the following piece called There, one of those songs of loneliness and longing that comprise a great part of the record. It’s one of a couple of tracks on the that have the potential to be commercial radio hits. <<>>

A hint of the recording’s Nashville surroundings creep into a couple of the tunes, including In the Company of You. The lyrical theme here is that of a rambler settling down for the sake of love. <<>>

Even more toward the pop side, to the point of being a bit clichéd is Chills. It’s a pleasant song that also has the potential to crack commercial radio, but hardly it’s hardly the album’s most musically creative. <<>>

On the other hand, showing the group’s art-rock influence is Something to Live For, one of the CD’s highlights. <<>>

The string section makes its appearance on one of the album’s more melancholy songs, Snow. The elegant arrangement works very effectively with Ms. Nobel’s heartfelt vocal. <<>>

The album’s lengthiest track is also one of its biggest disappointments for me. Angel is another good piece of writing and features a rather nice instrumental closing section, but otherwise the arrangement moves a bit too far toward top-40 land. <<>>

Perhaps the centerpiece of the CD is The Passing of the Evening, which epitomizes the Grey Eye Glances sound. There’s a dichotomy between its accessible pop ingredients, such as the funky but inflexible beat, and with the musical sophistication of old-fashioned progressive rock. It features another nice performance by Jennifer Nobel. <<>>

Also interesting is The Me You See, which recalls 10cc or the Electric Light Orchestra. <<>>

The album ends with an extra, undocumented track, a short, instrumentally-scaled back reprise of The Passing of the Evening, that comes after a minute and a half of silence. It makes one wish they had done the full version of the song this way. <<>>

Grey Eye Glances’ new third CD, Eventide, their first to get national distribution, is a nice combination of thoughtful material whose influences run from art rock to Nashville country, with tasteful playing and the very appealing vocals of Jennifer Nobel. There is nothing really astonishingly original here, and indeed there are a few pop clichés and a couple of weaker tunes that the album might be better without. But what a music critic like me calls a cliché might just be what it takes for this group to be heard by wider audiences, who would then get to hear the more edifying music Grey Eye Glaces has to offer.

Sonically the album, engineered by Steve Boyer, who had worked on Peter Gabriel’s So, deserves about a B+. As is so typical for major-label CDs, Eventide was mastered with more compression than necessary, apparently just to make it sound louder. And sometimes the mix muddies the strings and acoustic piano to the point that they can sound like their synthesizer equivalents. But the nicely layered sonic textures work well to enhance the group’s arrangements.

Grey Eye Glances is a fine band following in the footsteps of other mellow, female-fronted groups. On Eventide, they have much to offer a listener looking for interesting but accessible music.