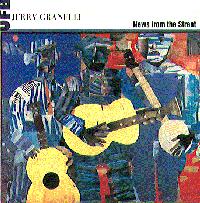 Jerry Granelli UFB: NEWS FROM THE STREET
by George Graham

Though jazz-rock fusion has not completely disappeared, there's a lot less of it around than there used to be, especially compared say to 20 years ago when the electric music played by jazz musicians reached it heyday with people like John McLaughlin's Mahavishnu Orchestra, Weather Report, Chick Corea's Return to Forever, and Herbie Hancock, who all traced their origin to Miles Davis' late 1960s groups. While electric instrumental music has always been around since then, the sound of it has changed, due especially to Pat Metheny who redefined fusion with a more sophisticated sonically textural style that took the music from being based on high energy improvisation to being more based on composition and ensemble playing.

Through it all there has remained something of a dichotomy between two types of fusion -- jazz-rock based mainly on rock, and that based mainly on a jazz writing style. There were the rock people, including McLaughlin and groups like the Dixie Dregs who kept a rock beat going and featured electric guitars prominently, and the jazzier folks who had a basically different style of composing, such as Metheny and Weather Report.

This week's album is one of the relatively few, which in two decades of fusion, easily crosses back and forth between the two schools of writing and arranging. It's by drummer Jerry Granelli's group called UFB, a CD entitled News from the Street.

Veteran drummer Granelli has assembled a young group from Germany with two guitarists, a bassist, and no keyboard player that creates an interesting and very artistically successful amalgam. They do mostly cover material in often unexpected arrangements, ranging from tunes by Jimi Hendrix, Bruce Hornsby and John Hiatt to a Thelonious Monk piece. They also do four originals that run from funky to spacey. And despite the fairly conventional instrumentation, their arrangements always have some original twist, like the bass suddenly taking the melody line, or a combination of electric and acoustic guitar.

Joining Granelli in this quartet are guitarists Kai Brückner and Christian Kögel, with Andreas Walter on the bass. Granelli is a very tasteful and decidedly jazzy player who nevertheless shows his predilection for funky rhythms. He is one of those drummers that doesn't call much attention to himself, until you take the time to pay attention to what he is doing percussion-wise. Then you realize how interesting yet relatively understated his playing is. All four members of UFB are like that. Since the liner notes fail to provide an indication of which guitarist is playing what part, and since this is the first time I have heard either of these musicians on record, suffice it to say that they work very well together, and both easily move back and forth between sedate acoustic playing to all-out rock decibel levels. On this album they also sometimes cheat and overdub extra parts, but this is, after all, a studio recording. As mentioned, bassist Walter often gets a chance to solo -- sometimes by stating the main theme of the piece, rather than just being given a slot for improvisation in the middle.

Perhaps what I enjoy most about News from the Street is the element of surprise the album contains. Just when you think you have the band pinned down stylistically, their next track will go off in a different direction, especially in their unexpected treatments of the cover tunes, almost of which are originally songs with words. They also prove that a simple two-guitars bass and drum quartet, the staple of thousands of rock bands over the years, can do things that sound fresh.

The album begins with one of those improbable arrangements. The song is an old Bill Dogget bluesy R&B tune called Honey Boy which Granelli and company give a treatment I supposed could be described as space funk, with an acoustic rhythm guitar providing an almost folky undercurrent. The two guitarists play parts that weave around each other, while the overdubbed acoustic guitar provides a third part. <<>>

Another unusual choice of a tune for a fusion band is Big Love, by John Hiatt, Ry Cooder and Nick Lowe when they had short-lived group called Little Village. They do it as slow bluesy rock, with that folky acoustic guitar again tempering the sound. The theme is stated by bassist Andreas Walter further to complicate matters. <<>>

One of my favorite tracks on the album is UFB's arrangement of Bruce Hornsby's Rainbow's Cadillac originally from Hornsby's Harbor Lights album. Drummer Granelli adds a lot of nice little accents with his tom toms, while the two guitarists hint at a Grateful Dead ambience, and bassist Walter gets funky. The result is one of those great musical moments when familiar ingredients come together in a way that is quite original and fresh. <<>>

UFB does a more or less straight blues treatment of Clarence Gatemouth Brown's Sad Hour. But they throw another interesting curve, when on the statement of the theme, the two guitarists both play lead, and neither plays the chordal accompaniment. <<>> But later in the track things get a little more conventional as each of the German pickers takes turn with the lead, and shows how bluesy he can be. <<>>

The original tunes run in various styles. The title track News from the Street is a kind of spacey funk... <<>> while another Granelli composition, Akicita is much more contemplative and atmospheric. <<>>

The group draws on another unconventional source for material for a fusion band, Bay Area folksinger Rinde Eckert, who also appears elsewhere on the album doing wordless vocals. The Eckert tune is called Ellen Waiting, and the melancholy ballad takes the group in yet another direction. <<>>

The loudest electric track is, ironically, the one jazz standard on the CD, Thelonious Monk's Brilliant Corners. The guitarists cut loose, while Granelli jumps, from time to time, into a jazz swing rhythm. The result is curious, and a track some will probably call brilliant while others might hold less enthusiasm for. <<>>

The album ends with Jimi Hendrix' Little Wing, which the group, in another little surprise, plays rather straight. This tune has been done by many artists in all manner of styles, so perhaps Granelli and company figured they wouldn't bother to try something unusual, and instead play it as a sweet, easy-going blues. <<>>

Jerry Granelli and his group UFB, with their album News from the Street shows that there's still creative life left in fusion music. This is one of those rare albums that successfully spans both the rock side and the jazzy side of the fusion spectrum. While the instrumentation of two guitars, bass and drums seems simplicity itself, they manage to make music that is full of interesting twists and surprises, from their distinctive way of combining familiar instruments to their idiosyncratic choice of cover material. It succeeds since all four members of this international band are fine players who apply their imagination to working together, rather than trying to be flashy individual soloists all the time. Perhaps that's one of the benefits of having a drummer as the leader of the group -- there are only so many drums solos that can be taken, and Granelli takes very few.

The album's sonic production and mix are first-class throughout. Everything in this recording, made in Germany and mixed in San Francisco, is right where it should be, with Granelli's drums having a particularly fine sound.

For those who enjoy fusion music, either the variety that approaches from the rock direction, or that which derives from a jazz perspective, Jerry Granelli and UFB's News from the Street provides first-class creative playing that will stand up to lots of repeated listenings without losing its appeal.