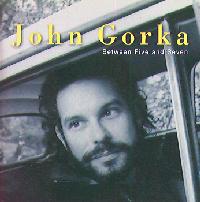 John Gorka: BETWEEN FIVE AND SEVEN -- by George Graham

For those who like good singer-songwriters, this is a very opportune time. Ever since the mid 1980s, when Tracy Chapman and Suzanne Vega had their first hits, record companies have been showing a respectable interest in solo artists, usually armed with an acoustic guitar, who write songs with more than "Baby Baby I Love You" or "Let's Dance" lyrics. While some of the long-time practitioners of the art, going back to an earlier folk boom, remain active, the number of artists who have emerged in the last few years is almost staggering. Except perhaps for Chapman, articulate folkies hardly ever get to the upper reaches of the pop charts, but the number of albums being released, most by the smaller independent labels, is almost overwhelming. To top it off, a surprisingly large fraction of them are very good. Even some former grungers from the alternative rock scene are going acoustic, to concentrate on their songwriting. So there is no shortage music to choose from.

But one of the very best of the current generation of singer-songwriters is John Gorka, who had just released his sixth album appropriately entitled Between Five and Seven.

A native of New Jersey, Gorka got his start here in Eastern Pennsylvania hanging out at the Godfrey Daniels Coffeehouse in Bethlehem where he worked as a volunteer and go-fer, eventually and timidly beginning to perform his own songs. It wasn't long before the singer-songwriter connoisseur patrons there noted their appreciation of his articulate, sometimes funny, occasionally poignant songs delivered in his appealing warm baritone. Gorka started making the rounds of other folk venues, entered songwriting competitions, and by the early 1990s began racking up national accolades and attracting other artists as his fans. Since then, his career has been on a slow, steady rise, winning ever larger audiences and critical praise for his distinctive style which epitomizes everything that a good singer-songwriter should do.

Over the course of his albums, a starting almost nine years ago with his debut I Know, Gorka has touched on a lot of subjects in his songs, often ones rarely taken up by other songwriters from cows in the snow, to stolen cars, to suburban sprawl, to Elvis Presley. Along the way, he has written a few compositions which could be described as character studies. And that seems to be a focus of Between Five and Seven. Several of the songs revolve around people in various circumstances, usually misfits searching for something to get their life in order. But there are also a couple of love songs, a tune written from the perspective of a lightning bolt, and a wonderful tribute to his mother, intended for her while she is still around to appreciate it. As usual, Gorka's lyrical wordcraft is the envy of many a folkie, with a combination of unexpected perspective and some remarkably clever phrasing, coming in such titles as Airstream Bohemians, The Mortal Groove, and Scraping Dixie.

Some of the same musicians who appeared on Gorka's last record, 1994's Out of the Valley are on Between Five and Seven. They include guitarist and co-producer John Jennings, and bassists Michael Manring and J.T. Brown. In his liner notes, Gorka thanks Mary Chapin Carpenter for letting him use her band, which also includes guitarist Dean Magraw, drummer Robbie Magruder and pianist Jonathan Carroll. One interesting fact about the album was that it was recorded in Paisley Park, the Minneapolis-area studio of the artist formerly known as Prince. The studio owner's influence, however, isn't apparent on Gorka's album. But, a prominent Minnesota acoustic musician does appear -- Peter Ostrousko, who plays some tasty mandolin here and there. Other guests include follow folkie Lucy Kaplansky and Jennifer Kimball, who was one half of the duo The Story, providing backing vocals. Together they provide accompaniment that is a bit less commercial-sounding that Gorka's still-tasteful last album, which is a pleasant surprise. Electric guitars and drums are less frequently heard this time around, putting fewer things between John Gorka's exemplary songs and the listener.

The album begins with one of his compositions written from a curious viewpoint. It's called Lightning's Blues, which uses a metaphor of the electrical discharge and phrases the song from the perspective of a lightning bolt. <<>>

The first of the album's misfits makes an appearance on the song Blue Chalk. In previous albums, Gorka has provided little introductions to his songs in the liner notes, often shedding light on the song's inspiration. This time around, one is left to guess. Blue Chalk revolves around a couple, of whom the male half is likely a substance abuser. Juxtaposing with the lyrics is the attractive folky backing with Peter Ostroushko's mandolin. <<>>

Gorka has addresses the changing character of towns and cities before in song. This time he comes up with another fine piece in the same vein, The Mortal Groove, considering the so-called "gentrification" of an old blue collar community. <<>>

One of this album's finest songs is Airstream Bohemians, another character study, in this case another couple of misfits. The bluesy accompaniment provides the backing for some of Gorka's great wordcraft. <<>>

There are a couple of love-songs. However, don't expect the usual pop-music viewpoint. Can't Make Up My Mind goes off on an amusing tangent of indecision, in this track with one of the more attractive pop melodies. <<>>

Gorka's musical appreciation of his mother is called Part of Your Own. This fine song is performed in a simple solo setting, giving it all the more personal a quality. <<>>

The album contains a song written from what I suppose could be considered a very unusual perspective. Politicians have come in for a lot of scorn in recent years, and certainly have been the target of many a protest song. Gorka created Campaign Trail from an aspiring office seeker's viewpoint, empathizing with the rigors of the campaign including the scrutiny and requests for favors it brings. <<>>

The album ends with another of Gorka's narratives revolving around one of life's less fortunate characters. Scraping Dixie, the album's longest track traces a drifter who works odd jobs and roams the South to avoid the winter. <<>> Again, he comes up with some brilliant lines, like his reference to death as putting on a "tree suit." <<>>

John Gorka's new sixth album Between Five and Seven is another superb record by one of today's finest singer-songwriters. Nothing Gorka does really hits you over the head at first, but his subtle, sensitive songs with their great lyrical lines, along with his warm, appealing delivery make his music the something you'll want to go back to again and again, with an appreciation that will grow at each listen. The more acoustic, less pop-oriented instrumentation and production on this album, compared to his last, is also welcome, and I think further enhances the songs.

Sonically, the album is also nicely handled. After the recording was done at Prince's studio, it was taken to Springfield, Virginia, for mixing by Bob Dawson in a studio known for its bluegrass and New Acoustic work. The result is excellent sound, capturing the quality of the largely acoustic instrumentation with a minimum of compression and Gorka's voice coming out especially well.

It's almost impossible to keep up with all the good singer-songwriters appearing with records these days. But John Gorka's Between Five and Seven is a real standout, and underscores his reputation as one of the best in the business.