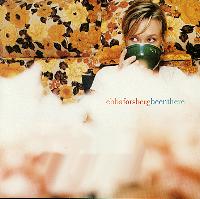 Ebba Forsberg: Been There -- by George Graham

The chanteuse seems to be making something of a comeback -- the female vocalist with a romantic flair, often with some jazz or cabaret influence. This is even happening in the context of pop groups. Everything But the Girl's Tracey Thorn has been one of the practitioners of the style for a the better part of a decade now. k.d. lang has become one of the finest torch singers of the 1990s, and to a greater or lesser degree, people like Tori Amos and even Jewel are showing the influence. More recently, the emerging group Morcheeba has been combining somewhat romantic vocals with very 1990s instrumental settings.

This week we have another outstanding example of the chanteuse of the late 1990s, Ebba Forsberg, whose debut CD is entitled Been There.

The album title is rather appropriate, not only because it implies a certain ennui which a proper torch singer should exhibit, but because of Ms. Forsberg's unusually peripatetic background. Born in Sweden, Ms. Forsberg moved at age five with her older sister Kajsa and her family and stepfather to the Island of Tortola in the British West Indies. When she was twleve, Ebba moved back to Sweden for a year, then settled in Botswana in Southern Africa, in the period before the fall of Apartheid. She lived there for eight years, absorbing influences and working on her own music, before eventually returning to Sweden, where she has been doing music full time for the past several years, working as a backup singer and studio vocalist. She reunited with her sister Kajsa Ribbing, with whom she had not been that close as they were growing up, sometimes on different continents, and began composing with her, with Kajsa writing the English words and Ebba creating the music. The result is hardly the bright, lightweight pop one usually associates with the country that gave us Abba.

Been There is a fascinating collection of influences, that is in some ways, the polyglot that Ebba Forsberg is herself. There's melancholy lyrics occasionally contrasting with an upbeat setting. Sometimes the music can ruminate, while at others it will combine the drum machines and sampled rhythm tracks reminiscent of rap or so-called acid jazz, with an otherwise wistful mood topped by ethereal-sounding synthesizers. Every once in a while, one can hear hints Beatles influence as well. The sum ends up being greater than the parts, and despite the variety of moods, the record always remains appealing, with Ms. Forsberg's beguiling vocals wrapping around the songs and drawing in the listener.

Ebba Forsberg's principal collaborators on the CD are Mats Asplén and Tony Thorén who co-produced the album and did the arrangements with Ms. Forsberg. The variety and generally good taste of the arrangements prove to be one of the album's strongest points.

Leading off this relatively short 40-minute CD is Lost Count, one of the sadder sets of lyrics, with a kind of classic roots-rock setting featuring a drummer who shows a fair amount of Ringo Starr influence. <<>>

That is followed with one of the CD's most memorable tracks, Most of All, on which Ms. Forsberg really assumes the role of chanteuse with her sultry delivery over the musical setting combining jazzy harmonic sophistication with sampled drum tracks and spacey synthesizers. The song's lyrics, about accepting life's difficult circumstance and moving on, also add much to the track. <<>>

With quite a different musical setting is Photographs, a straight out love song done in an attractive acoustic guitar arrangement. <<>>

The album can get rather electric. I'll Do Fine addresses a strained relationship between mother and daughter, while the band rocks. <<>>

There are times when the album can approach more conventional pop music. Hold Me is one such example, though a tasteful and sophisticated one. <<>>

Perhaps the most downright interesting track on the album is Carried. The ruminating arrangement alternates between mysterious-sounding and electric grunge, while the lyrics run toward the theological. <<>>

Ms. Forsberg's own rootlessness is reflected in Take Some Time, which is slightly reminiscent of mid 1970s Joni Mitchell in sound. <<>>

The album ends with probably its closest thing to an old-fashioned torch song, Didn't Treat Me Right, which has the classic aura of the genre, despite its contemporary synthesizer trappings. <<>>

Ebba Forsberg's new debut album Been There is a very enjoyable work by a first-class chanteuse of the 1990s, combining the romantic singing style of the past with more contemporary arrangements, and a good deal of eclecticism. The songwriting by Ms. Forsberg and her lyricist sister Kajsa Ribbing is first-class, and the diverse arrangements allow Ms. Forsberg to run through the range of emotions and moods, showing her versatility and thoroughly good taste.

The album's production and mix are excellent, with a nice variety of sonic treatments to complement the diverse musical arrangements. But as is so depressingly common these days on major-label releases, sound on the CD is badly compressed, presumably in the mastering process, so that even the quiet, laid-back songs blast through at nearly the maximum volume a CD will permit. That really detracts from the dynamics and even the emotional range of the music.

Ebba Forsberg's Been There is an impressive debut by an artist who has been in a lot of places in her life. She brings some of those influences to bear in her intriguing, seductive musical blend.