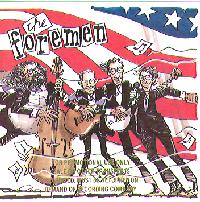 In composing music, you can take two different approaches. One is to create something you hope will be a durable piece of art, with as much relevance years or decades from now as it has today. In so doing, you also can ignore current trends and end up with music less likely to win a big popular audience. On the other hand, you can take the opposite extreme and write music about current events in the news, creating what Tom Paxton calls "short shelf-life songs." Nevertheless, the best old topical songs can still remain worthwhile pieces of music even after the events about which they were written have passed into history. And history does have a tendency to repeat itself.

This week's album is by a group very much dedicated to the proposition of dealing with the here and now, specifically the politics of the day. It's the second release by a West Coast quartet called The Foremen, entitled What's Left? It comes just nine months after the group's debut Folk Heroes.

Satire is the Foremen's stock in trade. They started out doing sendups of 60s folk groups like the Limelighters and the Wayfarers. Foremen founder Roy Zimmerman is quoted as saying of the latter group, "Here were four fraternity brothers singing their hearts out about mining disasters, high seas plunder and dogs named Boo. I thought 'this tradition must not die. It must suffer for years to come.'"

Another of the traditions from that era was the topical song. Following in Woody Guthrie's footsteps, the folkies of the Sixties like Phil Ochs and Tom Paxton took the news of the day and used it to weave songs, often making a strong point with humor. Also during the mid-1960s, pianist Tom Lehrer brought political satire to a high art. But in recent years, songs about politics have become scarcer. These days, the torch is carried by Mark Russell and the Capitol Steps. With the release of What's Left? the Foremen prove themselves to be among the ranks of the best, showing their debut album was not just a momentary novelty.

The Foremen have been together a little less than four years. Zimmerman, who writes all the songs and plays guitar and banjo, is joined by multi-instrumentalist Doug Whitney, singer Kenny Rhodes, and acoustic bassist Andy Corwin. And despite their lyrics dealing with politics, The Foremen continue their direction of musical satire, attempting to lampoon styles ranging from 60s folk to Motown, Phil Spector-style pop records, and -- on this album -- Broadway and even, as some have observed, the spirit of Gilbert & Sullivan. Satire is generally not considered a hotbed of musical virtuosity but there are times on this new album when the Foremen, and the large group of backing musicians -- essentially an entire orchestra with strings and horns -- can serve up some pretty impressive arrangements.

But instead of marvelling at the instrumental backing, most people will be listening to what the Foremen have to say. After last time singing about Oliver North's acquittal, Bill Clinton's vacillations, immigration, and generally addressing the rightward tilt of the current Congress; this time they take up a similarly current set of themes, including the forthcoming Democratic and Republican conventions, the national debt, school prayer and Public Broadcasting. While the Foremen are bipartisan in their raillery, the foibles and mindset of the far right do get ample attention.

That is illustrated by the first tune, San Diego, the locale of the upcoming GOP convention. After a hypothetical introduction at a political banquet <<>> the Foremen do a Phil Spector-styled sendup of delegate stereotypes. <<>>

The Democratic Party, due to hold its convention in Chicago, gets the Crosby, Stills and Nash treatment from the Foremen on the CD's closing song. It's partly based on Graham Nash's old song Chicago about the 1968 convention, and partly on Suite, Judy Blue Eyes. The Foremen's ditty is also called Chicago, subtitled (Love Song to a Democrat). It's the Democrats' pragmatism that gets the Foremen's attention. <<>>

Also on the subject of the campaign is a very bi-partisan song called What Did You Do on Election Day? taking up the subject of voter apathy in classic Pete Seeger folk style. <<>>

Three Strikes and You're Out, addresses up the politically popular crime issue in a musical setting patterned after the Roger McGuinn and the Byrds. The Foremen consider the consequences of the sentencing laws as they see them. <<>>

With the federal deficit a perennial political issue, the Foremen come up with one song that is likely to have relevance for the foreseeable future. Uncle Sam's Lament takes its musical inspiration from the Depression era classic Brother, Can You Spare a Dime, only in this case, it's a somewhat greater amount of money being begged. <<>>

The song most likely to raise eyebrows on the record is My School Prayer, which speculates on the consequences of a school prayer amendment. <<>>

One relative departure from political arena comes on a piece called Black, a fun satire of Fifties beat poets. <<>>

Around these parts, the most relevant song on the album is Privateers of the Public Airwaves, done in grand theatrical style. The premise of the song, of course, is the assault on Public Broadcasting among certain members of Congress. <<>>

The Foremen's new album What's Left? proves that this political and musical satire group are not just a one-shot novelty. While many of their songs are likely to be out of date in a couple of years, their relevance and currency makes this album great for 1996. Thus Roy Zimmerman and his group have established themselves as one of the best, of the admittedly few, topical song specialists these days. They recall the wit and cleverness of Tom Lehrer and add a great sense of musical satire as well, doing send-ups of musical styles as well as politics. Producers Andy Paley and Jim Ed Norman did a great job in bringing in added musicians and helping the Foremen to recreate the sounds of everything from Broadway to the Byrds. The result is a fun record likely to tweak just about everyone's political views and have fun in the process.

From a sonic standpoint, the record is well done. The earlier styles the group re-creates are expertly handled, without taking authenticity to the point of the bad sound charistic old records. And the material with the orchestral arrangements can be fairly impressive on a good stereo system.

If you're looking for a record with lyrics that will stand up into the 21st Century, this is definitely not it. But the Foremen's topical songs are done well enough that they will still be fun to listen to, even when you've already heard the jokes. And this is the kind of record that you are likely to have fun playing to your friends.