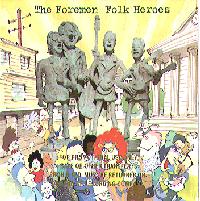 Topical songs about politics are a great tradition that goes back to the earliest days of this country. But the golden days of the topical song in the current century was during the 1960s when the folksingers of late Fifties and early Sixties became the protest singers of the mid-1960s at the height of the Vietnam War, the civil rights and free speech movements. It was a turbulent time and with music going through as much of a change as anything else, so it was only natural that the issues of the day were taken up in song. Within the genre there were the protest singers who had a fairly solemn message, and there were the satirists, with Tom Lehrer being the best known. There were also those like Phil Ochs and Tom Paxton who combined humor with a message.

With the end of the Vietnam War most protest singers turned their attention to other subjects, and topical songwriters became few and far between. These days there is, of course, Mark Russell when he plays his piano, and over the last couple of years the Capitol Steps have been keeping up the tradition of funny current events songs, making fun of most politicians regardless of party.

The week, we have an album by a group that combines musical satire with a set of very clever songs that are also quite
up-to-date in terms of the players on the political stage. They also get in quite a few well-placed barbs aimed mainly at the rampant misanthropy coming out of Washington since the 1994 elections. The group call themselves the Foreman, and their debut CD is entitled Folk Heroes.

The Foremen have been performing together for about three years now. They got started when group founder Roy Zimmerman came across an old LP by one of the folk-era bands of the early 1960s, the Wayfarers. Of that group, Zimmerman says, "Here were four fraternity brothers singin' their hearts out about mining disasters, high seas plunder and dogs named Boo. I thought 'This tradition must not die. It must suffer for years to come.'"

Zimmerman started writing songs that were a sendup of the old style of the Kingston Trio, the Limelighters and others of their day. But it wasn't long before the same thing happened to him that happened to the folkies back then -- his songs turned to the political. Of course, The Foremen's raison d'être, satire, was not forgotten, and they looked to people like Tom Lehrer for inspiration. Indeed, Lehrer gives the band an endorsement in the liner notes, praising Zimmerman for "reintroducing literacy to comedy songs."

The other Foremen, who in the early Sixties folk-group tradition are pictured attired in matching suits and ties, are multi-instrumentalist Doug Whitney, who plays guitar, banjo, mandolin and horns; percussionist Kenny Rhodes who has a theatrical background; and acoustic bassist Andy Corwin. All four sing, with vocal harmonies that are sometimes just enough off that it sounds like authentic Sixties folk music. Sometimes they break into a lusty unison chorus just as the Kingston Trio did when they couldn't figure out a harmony part.

While the style of Folk Heroes is primarily like that of the 60s folk groups, The Foremen also do songs in sendups of everything from the Beach Boys Good Vibrations style, to something that tries to be Motown, to a big pretentious rock ballad.

While most of the album deals with politics and the current tilt to the far right, the album begins with a strange little one-minute gem called No Shoes.

The current events songs get underway with Ain't No Liberal, done as a pseudo-gospel revival hymn praising one's new found conversion to the right-wing way of life.

Another decidedly political song is a bit more dated, Ollie Ollie Off Scott Free revives a figure who has since faded a bit from the scene, Oliver North. Regardless of politics, the cleverness of the lyric writing and rhyming schemes makes a this a good example of why Tom Lehrer praises the group's wordplay.

Another song in which the Foremen note a sign of the times is Peace Is Out, which contrasts the peace movement of way back when with today's wars on crime. In the process the Foremen do a great musical satire of the late 60s psychedelia.

Rather less political but still very much about the state of the world is Hell Froze Over, done in a quasi-bluegrass arrangement. The premise of the song is a collection of highly improbable events.

Though the object of many of the Foremen's barbs are those on the political right, the President of the United States gets equal treatment on Do the Clinton, done as a old-fashioned dance craze.

American politicians are not the only targets of the Foremen. The belligerently ultranationalist Russian parliamentarian Vladimir Zhirinovsky is skewered in another of the album's most clever and theatrical tracks, Russian Limbaugh.

Immigration is also in the news, and the Foremen take up the issue with Send 'Em Back, with an arrangement that really sounds like musical comedy.

If there is going to be a hit from this album, it's likely to be My Conservative Girlfriend, done in what is supposed to be Motown-influenced style. It's a lot of fun and nicely encapsulates the spirit of the mid 1990s.

The album ends with its big production number, Everyman (For Himself), which the group describes in the song's introduction as a "conservative power ballad." It's another hoot that gets its point across.

It has been a long time since there has been an outstanding political satire album released by a major record label. The Foremen's debut Folk Heroes, which, by the way is on the same label for which Tom Lehrer recorded, a revives a great art form in a time when we really need such a thing -- clever, literate musical humor that has also makes a point or two along the way. In addition to the lyrical satire, composer Roy Zimmerman and company also do a fun combination tribute and sendup of some of the eccentricities of music from the 60s, especially the folk groups after which the Foremen patterned themselves.

Of course, the trouble with being as topical as the Foremen are, is that in a year or two, the lyrics may be very much out of date. But like Tom Lehrer thirty years ago, the Foremen are astute enough that their music's appeal could well withstand the passage of time.

In terms of production and sound, producers Andy Paley and Jim Ed Norman did a good job of achieving the sound of some of the styles the Foremen were satirizing, while leaving enough of the rough edges in to remind us that it is, after all, a comedy album. Sonically, the it's nicely mixed, but again humor recordings are rarely audiophile extravaganzas.

All in all, the Foremen's Folk Heroes marks the return of a great tradition, and just in time.