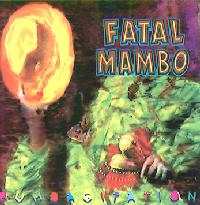 People who have listened to my radio program long enough often tell me that my middle name must be "eclectic." I guess that wouldn't be too far off the mark, since the one thing that excites me most about new music is the breaking down of previous stylistic barriers, done in creative and artistically successful ways. With so many musical styles in the world, it's always interesting to see what happens when you start mixing them. Often the result is a mess, but once in a while -- and it seems to be happening more frequently recently -- some really fascinating and enjoyable music can emerge. It's even better when the resulting music is as much fun as it is interesting. This week's album is an consummate example of thoroughly creative stylistic amalgamation. It's by a group from France who call themselves Fatal Mambo, and their debut American release is entitled Rumbagitation.

What Fatal Mambo does, in the broadest sense, is play salsa music. The record company's publicity jokes about its like being like escargot and jalapeños. But it's even more of a culture concussion since Fatal Mambo has no scruples about bringing in reggae and ska, a little flamenco, acapella plus hints of Middle Eastern, hip hop, an old 60s British novelty song, and a what sounds like music from a Fellini film, while singing mambos in French. The result is enough to make your head spin if you weren't so busy dancing around and grooving on the music's irresistible beat, language barrier notwithstanding.

Fatal Mambo is from Montpellier, in the south of France near the Spanish border, the region that is also home to the flamenco pop group the Gipsy Kings. Fatal Mambo started when Jean-Francois "Oscar" Hammel attended a concert by salsa legend Tito Puente. It was an epiphany: he decided that salsa was going to be his career, and formed Fatal Mambo shortly afterward. They released their debut recording in France 1993. Hammel does lead vocals and percussion. Also comprising Fatal Mambo are keyboard man Mathieu Valeur, who has mastered the percussive salsa piano style, co-lead vocalist Sonia Sala, guitarist Jose Vicente, saxophonist Sandrine Ros, trumpeter Alain Henriot, and additional percussionists Patrick Brouard and Saïd Chaibi. They are all first-rate players, who are joined by additional guest musicians, mostly extra percussionists here and there on the CD, which was recorded in their home base of Montpellier.

Of course, there have been salsa bands from places other than Latin America, but what sets Fatal Mambo apart is the wild abandon with which they mix up almost anything you can dance to, sometimes abruptly and very cleverly shifting beats back and forth within a single tune. And they sound as if they are thoroughly enjoying themselves, making their music even more infectious.

The album begins with the track that is perhaps the most out of character on this extremely eclectic CD. La Medina is named after the Saudi Arabian city of Medina, and it begins with the sound of the city including the call to prayer, before the group does an acapella performance. This is the first time I have heard acapella salsa, but it works remarkably well. <<>>

That leads into a great straight salsa tune called Probleme. It's interesting hearing salsa sung in French. Otherwise, it's on the par with anything from Havana. <<>>

The title track shows the group's disdain for musical boundaries. Rumbagitation brings together bits of reggae and ska with their French salsa. The lyrics, by the way, are a kind of Francophone rumba version of the "rockin' pneumonia and the boogie woogie flu." "Rumbagitation" is the doctor's diagnosis. <<>>

Another thoroughly enjoyable fusion of styles comes on Ma Boussoule, which translates as "My Compass," a reference to the guidance provided by one's true love. Fatal Mambo brings in some flamenco guitar, while keeping a great salsa beat going, complete with the jazzy horn section. <<>>

As if that were not wide-ranging enough, Le Tambour, which translates as "The Drum," involves the importation of a bit of a hip-hop rhythm and reggae dance-hall style vocals. While they continue to hint at a Latin American beat, they also manage to work in a romantic French accordion. Again, the result is fascinating. <<>>

La Volonte, or "Will Power" is another blend of salsa plus hints of reggae, with the beat shifting back and forth as the two lyrical protagonists argue over his relative lack of will-power and restraint. <<>>

One of the album's biggest surprises is its cover of the old Mungo Jery hit from the 1960s, In the Summertime, which becomes Magot Tcherí. While parts of the song retain its original beat, <<>> Fatal Mambo launches into a salsa rhythm <<>> before bringing in a bluesy guitar. <<>>

The group does one salsa song actually sung in Spanish. Mi Hombre is the tale of a woman sticking by her often unreliable man. It's the second of the album's only two really straightahead salsa arrangements. Even playing it straight, they distinguish themselves in the process. <<>>

The album ends with its most stylistically indescribable track. Ja T'en Ai Pas Parler, or "I Didn't Tell You About It." It sounds thoroughly French, and again takes the form of an argument between a man and woman, in this case on a subject which is never really revealed in the lyrics. It reminds me of the kind of music Nino Rota created for the Fellini films, while lurking in the instrumentation is a bluegrassy banjo. <<>>

Unfortunately, there are relatively few synonyms in the English language for "eclectic." And it's the word that is almost inevitable in trying to describe Fatal Mambo. This French salsa group creates music that is not only a franco-latino fusion, but brings in reggae, flamenco and all manner of other influences. Their outstanding level of musicianship, great dance grooves, plus their spirit of good fun which comes across on the CD so well, makes it an irresistible package for those on a quest for refreshing sounds. It's music that makes it very hard to sit still, and at the same time, open-minded world music fans will likely be very impressed with the cultural fusion going on within Rumbagitation.

No producer for this CD is listed but recording's production and mix are first-rate. But, as is far too often the case, compression was added in the mastering process robbing the recording of a lot of dynamic range, which is especially missed with all the great percussion happening on the CD.

It is not often that one c=encounters a new album that is as completely fascinating, stylistically clever, and downright danceably fun as Fatal Mambo's Rumbagitation. It's definitely one of this year's best world music releases.