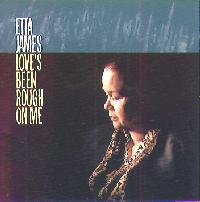 Etta James: Love's Been Rough on Me -- by George Graham

When I get to shaking my head over some of the music on today's commercial pop scene, I find myself thinking about the generational lines in music. A lot of people who were the age I am now back in the 1960s undoubtedly shook their heads, and were often rather verbal in their disapproval of the state of pop music then. But the passage of time has caused most of the bad music of the previous generation to be forgotten, leaving us with memories of the good stuff.

I am also fascinated by how in the 1990s, so many young musicians are playing music strongly influenced by the sounds that were popular in their parents' day, something that didn't happen a quarter century ago. Still, there is a lot of trendy, faddish music these day on the pop charts that will be likely forgotten a few years hence. And there are plenty fans of such music who seem to be more interested in what the group does in their video, which products they use, or most importantly, how cool they are in their attitude.

This is all brought to mind by this week's album which is about as untrendy, blissfully ignorant of fads and lacking in phony attitude as one can get. It's the newest release by 40-year veteran R&B singer Etta James, entitled Love's Been Rough on Me. The generational issue is suggested by the interesting way it is being promoted to younger audiences. The radio station review copies contain a sticker addressed to folks at college radio station saying "Diversity in college radio. This is it," in an attempt to wean younger listeners away from the tyranny of "alternative rock," a term which is now a complete oxymoron. Whether this marketing approach is successful or not, remains to be seen, but Etta James is not one who needs to establish her credentials, and she obviously is not about to worry about whether the baggy-pants set think she's cool or not. She is one of the most respected singers around, and her new release is one of the her best yet, a very classy album that interestingly, shows a fair amount of Nashville influence.

Etta James' career goes back to the 1950s, with her first record released in 1955, and top 10 hits including All I Could Do Was Cry in 1960, leading up to one of her biggest Tell Mama in 1967. Not a very prolific songwriter, nevertheless, her songs have become classics, covered by rock artists ranging from Rod Stewart to Janis Joplin. After a period marked by personal turmoil including everything from abusive men to drug addiction, which are set out in her autobiography, she returned to the recording scene in 1988 with the widely acclaimed Seven Year Itch. Since then, she has been active on the recording scene, with a wide range of new material, most produced by Barry Beckett, who used to be one of the main figures on the Muscle Shoals studio music scene in the Sixties and Seventies. In 1994, Ms. James did a straight-out jazz album called Mystery Lady, which won a Grammy.

Now she's back in the soulful blues category with Love's Been Rough On Me, but the album has an interesting twist. Barry Beckett has been living and working in Nashville for the past few years, and Ms. James has gone there to record with him. This time, there is more of Music City's influence being felt, as she does some very classy covers of former country hits, with a sound that evokes the other end of the Volunteer State -- Memphis. Though Ms. James can really belt out a song when she wants to, this record is generally laid back and derives much of its strength from the great backing musicians and arrangements, and Ms. James uncompromising level of class. The material includes very rearranged remakes of country hits by Lee Roy Parnell, John Berry and Jeannie Seely. There's also one first-rate original, and a cover of a song by durable rock band NRBQ. In connection with this album, Ms. James is quoted as saying "The Blues and country are first cousins. What I look for in a song is for the story to be real. I like a blood and guts kind of thing. That's what you find in country lyrics."

Joining her on the album, in addition to Barry Beckett who plays keyboards, is another keyboardist Steve Nathan, one of Nashville's first-call studio players, and one of the most versatile and tasteful studio musicians in the country music capital. On guitars are Brent Rowan, Josh Sklar and Dann Huff. Eddie Beyers plays drums and the bassist is Michael Rhodes. There are also some added horns and backing singers in this group playing arrangements that recall the records that came out of Beckett's former Muscle Shoals scene. But because this is Nashville, the record could not get away without a little steel guitar. There's just a hint on a few tracks, but it's there providing a reminder.

The album begins with one of those country covers, Lee Roy Parnell's The Rock, complete with Paul Franklin's steel guitar. Ms. James' performance hints at black gospel, while Beckett and band add to the generally righteous atmosphere. <<>>

More bluesy is the following track, Cry Like a Rainy Day, which has the classic Memphis soul sound. It's one of the album's finest, with Ms. James really delivering the lyrics with lots of authority, while the backing band shares in the classy soulfulness of this song of an archetypical broken heart. <<>>

One of this generally low-keyed album's most energetic tracks is Love It or Leave It Alone, written by ubiquitous composer Will Jennings. The band, especially the guitarist, whichever one he is, is hot, while Ms. James is in absolutely top form. <<>>

An excellent example of this album's fusion of country and R&B comes on the Jeannie Seely hit Don't Touch Me. The song itself has built-in country twang, while Ms. James' reading is dripping with authentic soul. <<>>

The album takes a great rock direction on Etta James' version of a composition by Al Anderson and Terry Adams of NRBQ. The combination of Ms. James earth-shaking vocal power and the band's energy level, complete with horn section, makes I Can Give You Everything, the definitive version of the song. <<>>

The album's title track, Love's Been Rough on Me, has an arrangement that runs more toward mainstream pop, but despite the clichés of the instrumental backing, Ms. James herself really shines again, delivering the lyrics as if she means every word. <<>>

Etta James has long been a fan of the late Otis Redding, and she includes a Redding song on this CD. I've Been Loving You Too Long is given the classic Memphis soul treatment complete with a long, slow built of energy level from the slow opening notes of the piano <<>> to the no-holds-barred finale. <<>>

The album ends with the one Etta James original Done in the Dark, a great set of lyrics about the ultimate futility of deception. She delivers her sage advice with the kind of soulful elegance that reminds us that Ms. James is still at peak of her powers. <<>>

Etta James' new release Love's Been Rough On Me, her latest collaboration with producer Barry Beckett this time absorbs some of the musical environs of Nashville, where the recording took place. She serves up a great combination of country songs given a high-class R&B treatment, plus rock and soul songs, along with an excellent original composition. While there are a couple of tracks where the Nashville influence in the arrangements is a little too prevalent for my taste, Ms. James herself never disappoints. She delivers the songs with a combination of soulfulness, elegance and expertly-controlled energy that is the mark of the great blues and soul singers of our age. Barry Beckett's arrangements, are, for the most part, outstanding, combining the influences of his old days at Muscle Shoals with a good helping of Memphis soul and a dash of country twang. The result is an album that is another highlight of Ms. James' long and distinguished career.

The album's sound is thoroughly commendable. The mix is first rate with all the instruments sounding clean and bright, and Ms. James' vocal keeping her power through the good use of dynamics. The principal recording and the mix engineer was Pete Greene, who deserves kudos.

It would be interesting to see if someone like Etta James finds an audience among the alternative rock set. It's possible, though given her authenticity and complete lack of pretense, pop trend-riders are likely to a come to a better appreciation of her music after they do some maturing. Ms. James, though she may try jazz and dabble with country songs, is a genuine original, impervious to ephemeral music fads, and remains one of the finest blues, soul and R&B singers around.