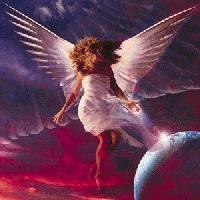 Different genres of music have their respective star instrumentalists, generally on the instrument most associated with the style. Classical music has had its violin sensations going back to Paganini. Jazz has its trumpet and sax luminaries: Louis Armstrong and Miles Davis, Charlie Parker and John Coltrane. And rock, of course, has its electric guitar icons, from Chuck Berry and Dick Dale, through Jimi Hendrix and Eric Clapton, to current generation stars like Steve Vai. And if you look on the front covers of magazines devoted to rock guitar, one of the most talked about players among guitarophiles is Eric Johnson, who had just released only his third album in a decade, Venus Isle.

In many ways, Eric Johnson is an unusual figure in rock guitar. Johnson has been a fixture on the Austin, Texas music scene for years, and he is one of the few prominent Austin musicians to have actually been born and raised there. But his style, which borders on the symphonic quality of art rock, is at odds with the country, blues, and singer-songwriter approaches which are the mainstays of the Austin scene. While many consider him a recent musical phenomenon, the perennially-youthful looking guitarist, is now 42, born in 1954, the same year as Stevie Ray Vaughan. He has been recording since 1975 when he played guitar on the album that contained Christopher Cross' hit Sailing.

The son of a physician and serious music fan, Johnson's first instrument was piano, starting on lessons at age five, with a teacher who encouraged him to develop his ear. By age 10, he took up guitar, after his brothers started playing in a band influenced by the Ventures. Then came Jimi Hendrix, and Johnson's whole perception of guitar was changed, becoming aware of the quality and tone of the guitar -- something which has since become an obsession. After the death of Hendrix, Johnson said he questioned the future of the guitar in rock, and with keyboard-dominated bands like Emerson, Lake and Palmer rising to prominence. Johnson searched for new avenues, and found them in the guise of the jazz-rock fusion of the 1970s. He cites Chick Corea's Return to Forever as another profound influence. Johnson then formed a fusion band called the Electromagnets, which found it tough going in country and blues dominated Texas, but he persisted and eventually recorded an album. But due to a bad experience with a manager with whom he had signed a burdensome contract, the record never got released, and Johnson found himself off the performing circuit for almost six years.

Finally freed from the contract, Johnson made an appearance in 1985 on the hometown Public TV series Austin City Limits, which created a great deal of interest, and landed him a record deal, resulting in the LP called Tones in 1986. It was one of those critics' favorites that got Johnson a great deal of acclaim but not many record sales, so he was dropped by Warner Bros. After signing with Capitol, the record company made the dangerous move of giving Johnson full creative control. Always the super-perfectionist, especially with the regard to his guitar "tone," Johnson entirely junked several months of recording and started all over, making Steely Dan and Fleetwood Mac look like speed demons in the studio by comparison. His second album Ah Via Musicom, was finally released in 1990, and cemented Johnson's reputation as one of rock's most creative guitarist. It got him a Grammy Award, went gold in sales and earned an almost permanent place on the front cover of one or another of the guitar fan magazines, one of a very few non heavy-metal players accorded such a dubious honor.

Working in his own studio in Austin where he can proceed at his own pace, Johnson has taken a mere six years to come up with Venus Isle. Again, by his admission, he junked what amounted to a mostly completed album and started from scratch, this time twice. He also changed the title of the record at least once. It was supposed to be called Longpath Meadow. He again labored in the studio, spending literally days at a tine trying to perfect just the guitar tone for one solo, and obsessed to the point that he damaged his hearing somewhat through near-constant work next to cranked-up guitar amps. fiddling endlessly, sometimes trying more than twenty different guitar amplifiers until he found a sound he liked. Johnson is known for complaining about the differences in sound among various brands of batteries in his effects boxes. This, contrasting with his reputation as one of rock's truly nice guys, always polite, soft-spoken and self-effacing. He says that one of the reasons he took so long was that he was trying not to repeat himself and instead to move in new directions, while still maintaining his perfectionist's approach.

Is Venus Isle worth the six-year wait? In a word yes. Johnson achieves what he set out to do -- grow artistically, but build on his past work. It's a record that is both enjoyable and interesting musically, even if you're not a guitar freak, and if you are, the record is fret heaven -- full of playing that is both imaginative and flashy at times, and a cornucopia of great guitar sounds that proves there is much more to rock guitar than playing heavy metal or the blues. Johnson also goes back to his first instrument and plays a fair amount of acoustic piano.

The album features Johnson's trademark mix that includes Johnson's appealingly airy vocals that border on the lightweight, combined with lyrics that are mostly throwaways reminiscent of art rock. And there are the first-rate instrumentals. The album's focus, of course, is on the guitars, and there the record shines. Johnson has made instructional guitar videos illustrating how to play in the styles of some of his heroes (and a friend), like Hendrix, Wes Montgomery and Stevie Ray Vaughan. Those influences are again apparent on this album. There are tributes to Montgomery and Vaughan, with the latter featuring a guest slot by the late Stevie Ray's older brother Jimmie.

The personnel on Venus Isle includes holdovers from his last release, drummer Tommy Taylor, and bassist Roscoe Beck, who go back to the Electromagnets, and bassist Kyle Brock, who was also on Ah Via Musicom, along with keyboard man Steve Barber. In addition to Jimmie Vaughan, guests on Venus Isle include Christopher Cross, who does some background vocals, and a pair of percussionists.

The album begins with a bit of what I suppose could be called World Music psychedelia. The title piece Venus Isle contains hints of Indian music reminiscent of the Beatles, with vocalist Amit Chaterjee further adding to the ambience on the introduction... <<>> before the track gets into what I suppose could be called classic Eric Johnson, with its combination of tasteful guitar work and multicolored sonic palette. Johnson's vocal, and especially the lyrics seem almost anti-climactic. <<>>

That segues into Battles We Have Won, another song with pleasing but disposable lyrics, floating above another rainbow of guitar sounds. <<>> Johnson seems to devote special attention to the ends of his tunes, as evidenced by the impressive wash of sound at the conclusion of this track. <<>>

The first of the instrumentals is S.R.V., obviously dedicated to a fellow Austin guitar flash, the late Stevie Ray Vaughan. To Vaughan's bluesy feel, Johnson adds his distinctive composing style, which includes a lot of interesting chord changes. <<>> Jimmie Vaughan makes his appearance, with his guitar getting the Johnson sonic treatment. <<>>

A string section appears on a song of unrequited love called Lonely in the Night, which reminds me of groups like 10cc or Supertramp. <<>>

For pure rock guitar fans there's the instrumental called Camel's Night Out, done as a power trio arrangement, with mainly just one guitar, bass and drums, and Johnson largely improvising the guitar solo. <<>>

There was a piece called East Wes on Johnson's last album that was a tribute to the late Wes Montgomery. This record contains a track in a similarly jazzy vein, Manhattan, with Johnson playing in the octaves that were Montgomery's trademark. But Johnson includes a lot of guitar sounds that were never part of Montgomery's available sonic vocabulary. In fact, that is one complaint I have about this otherwise fine piece, there are just too many different guitar sounds switching back and forth constantly. <<>>

The most prominent acoustic piano performance by Johnson on the CD comes on a mellow composition called Song for Lynette. In fact the piano carries the piece, rather than the understated guitars. <<>>

My favorite vocal on the album is When the Sun Meets the Sky. It's probably the best combination of decent lyrics, nice vocal performance, and of course, exemplary guitar work. <<>>

Since Johnson won a Grammy for a rock instrumental performance, an instrumental track was released as the first single, which is rather unusual for the pop world. The piece is called Pavilion, and it's another good summary of Johnson's style and approach, and his quest for the ultimate guitar tones. <<>>

Eric Johnson's new album Venus Isle is the product of a musician obsessed with the quality of his guitar sounds, and performance perfection. Sometimes, that kind of thing can make for a bland or predictable record, but Johnson succeeds in going a step further in his music, as was is goal, and creates an album that is a guitar fan's delight, and in fact it will probably be a benchmark against which many others will be judged. His music is creative, his guitar work is nonpareil, and the overall effect can be quite exhilarating. I just wish he would concentrate even further on the instrumentals.

Sonically, the album is excellent. The guitar sounds really are impressive, and the overall mix has more dynamic range than you might expect for rock this electric. With Johnson and engineer and co-producer Richard Mullen laboring so intently with the guitar sounds, the other instruments, though reasonably well-recorded, tend to sound underwhelming by comparison. Johnson also puts a little too much reverb and delay effects on his vocals at times. But that's minor quibbling with an album that will likely be a showpiece for big stereo systems.

Eric Johnson recorded his influential first album in just two months. Now after six years, four of which were spent in the recording process, he is out with only his third release. Venus Isle shows that taking one's time making an album can pay off.