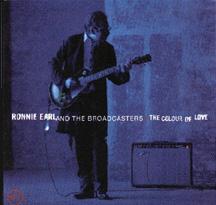 Ronnie Earl & the Broadcasters: The Colour of Love -- by George Graham

The current renewed popularity of the blues has given new opportunities to a number of worthwhile performers, from younger prodigies to venerable veterans. But except for occasional instrumental tracks on albums, the blues is almost exclusively a vocal pursuit. The most famous blues artists are the singers, and the blues itself is a form that is made or broken by the expressiveness of the performance. Next to blues singers, guitarists are the most visible players in the genre, and often the guitarist will be the singer, with B.B. King being the archetype.

This week, our album is by a blues guitarist who doesn't sing, and for the last several years has been performing with an all-instrumental group. Ronnie Earl and the Broadcasters have just released their latest recording called The Colour of Love.

Ronald Horvath, who took the name Earl after blues veteran Earl Hooker, was born in Brooklyn, NY in 1953 and didn't start playing the guitar until his early twenties, but he soon threw himself into it. While studying toward a degree in Special Education at Boston University during the 1970s, he gravitated toward Beantown's blues scene. He became part of the house band at the Speakeasy Club in Cambridge where he backed up visiting blues luminaries such as Otis Rush, Big Mama Thornton and Big Walter Horton. In 1979, he joined the durable, ever-touring Roomful of Blues serving as guitarist of the large horn-laden group for eight years. Then he launched his solo career turning out a prolific stream of recordings with eight albums on the New Orleans-based Black Top label with the help of such vocalists as Kim Wilson of the Fabulous Thunderbirds and Sugar Ray Norcia, who would become the singer for Roomful of Blues. In 1994, Earl again switched labels to Bullseye Blues and began a series of all-instrumental recordings which began to win him honors by such publications as Down Beat and Living Blues. All the while with his nearly constant band the Broadcasters, he has been showing a little underlying jazz influence, which flows naturally from the close association between the genres.

Now on one of the major labels, Earl is out with probably his most impressive album yet. The Colour of Love features some notable guests, including Gregg Allman of the Allman Brothers, along with the Allmans' drummer Jaimoe and percussionist Marc Quinones, plus jazz and R&B alto sax legend Hank Crawford. The result is a generous 68-minute CD that covers a lot of styles, and includes several dedications, including to Jimmie Vaughan, and interestingly World War II Holocaust victim and diarist Anne Frank.

For most of the album Earl is featured with the regular lineup of the Broadcasters, including Bruce Katz on piano and organ, who is also a very strong presence, Rod Carey on bass and Per Hanson on drums. They cover everything from rollicking shuffles, to soulful ballads to classic slow blues tunes, with most being original compositions by Earl or keyboardist Katz. But there are also some interesting departures from the normal blues fare -- a couple of pieces that show some Latin influence in the Santana style, and a remarkable blues treatment of a jazz standard, Thelonious Monk's Round Midnight. It's all done with a great deal of class and features fine playing by all involved. Earl himself is not the kind of guitarist who calls much attention to himself. Instead of flamboyance, he usually follows the blues maxim "less is more," and makes his mark from the subtleties of his playing, so that each listen to the record reveals some new facets and ideas in his soloing, and appreciation for the tightness and tastefulness of the band.

Another notable figure on the album is producer Tom Dowd, whose lengthy career first as an engineer then as a producer goes back to the early 1960s and includes work in the studio with artists ranging from John Coltrane to Aretha Franklin to the classic early Allman Brothers albums. Dowd's producer's notes indicate that he placed an emphasis on doing everything live -- which of course is at the heart of the blues -- and he writes that "One of the greatest tests of musicianship is to ad lib." His goal was to encourage that, and just sit back in the control room and let the musicians have at it.

The album gets under way with a strong Texas-style boogie called Hippology written by organist Bruce Katz, with a guest appearance by Hank Crawford, who tends to steal the show with his thoroughly soulful alto saxophone wailing. <<>>

The first of the Santana-influenced pieces is called Bonnie's Theme, which features Jaimoe and Marc Quinones from the Allman Brothers Band, thus ending up with two drummers, in the heavy, rhythmically ponderous Allman style, plus a percussionist lightening things up a bit with the congas. Earl plays some classy guitar in this fairly lengthy piece in three parts. <<>>

Gregg Allman makes his appearance on a piece he co-wrote with Ronnie Earl, Everyday Kinda Man, a classic-style slow blues, with some interesting twists like key changes. Allman sings, this making the track the only vocal on this otherwise all-instrumental recording. <<>>

Jimmie Vaughan is the honoree on the track Liked That Thing You Did, dedicated to Stevie Ray Vaughan's old brother. Earl and company serve it up Texas style, with probably Earl's most flamboyant guitar work on the CD. <<>>

The classiest cut on this tasteful blues album is the band's version of Thelonious Monk's Round Midnight. Earl's playing is the model of understatement, while Bruce Katz's Hammond organ provides an eminently laid-back foundation for the arrangement. <<>>

The title track The Colour of Love is probably the most original and stylistically interesting on the album. One can again hear a little of the Santana influence in the the melodic lines and Earl's wonderfully sweet guitar sound. The joint Earl/Katz composition might have started out as a jam, but at 10 minutes long, it never gets boring. <<>>

Another slow blues, Heart of Glass, is dedicated to former Fleetwood Mac guitarist Peter Green, to whom Earl also dedicated a track on his 1994 album Language of the Soul. Again, it provides some tasteful playing with Earl's guitar solo a outstanding example of greatness through economy. <<>>

The tune dedicated to Anne Frank is called Anne's Dream. It's another slow tune with a bit of Memphis soul among its influences. But it turns out to be one of the least memorable on the CD, despite an appearance by Hank Crawford.

The album ends with a rousing high-energy shuffle dedicated to Albert Collins called O' Yeah. Collins' style was obviously on Earl's mind when he made this track, though Earl adds his own signatures. <<>>

For his new twelfth album under his own name The Colour of Love, Boston-area guitarist Ronnie Earl and his group the Broadcasters serve up a fine collection of mostly instrumental blues with some notable guests. Earl is versed in a lot of styles, and this new CD illustrates that, showing everything from standard shuffles to latin-influenced to Thelonious Monk served up with a lot of class. Once again, his band is first-rate, with keyboard man Bruce Katz being an important collaborator with Earl. The result is a generous helping of tasteful blues with the emphasis on understatement.

Sonically, producer Tom Dowd and engineer Neal Ward also do an outstanding job, keeping a consistent sound throughout the stylistic variations that the CD contains. The album has the classic quality of some of Dowd's previous work, but with technical standards more typical of the 1990s. While there was some audio compression done in the mastering, the CD does feature a decent dynamic range.

Instrumental music may not be the first thing that comes to mind when people speak of the blues, but veteran guitarist Ronnie Earl and the Broadcasters prove that tasteful playing can make for great blues listening.