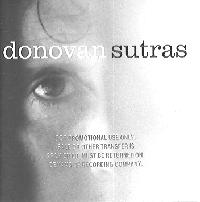 Much as the alternative rockers may be loath to admit, or maybe they might not even know, we Baby Boomers can point out that it all goes back to the 1960s and before. Grunge... we had it then, culminating in Jimi Hendrix. Tales of teenage angst... that goes back even further to many records from the 1950s. The currently trendy combination of a funky beat and psychedelic rock... try Sly and the Family Stone in 1968. How about the more laid back moody varieties of rock epitomized by Morrissey or groups like the American Music Club. Most of that goes back to a British singer-songwriter named Donovan.

Fortunately, current trends are causing a new awareness of some of the original artists, who are getting renewed recognition, in some cases posthumously. Venerable artists are making comebacks as a result, finding new audiences. The latest to turn up with a new album after a long period of inactivity is Donovan, whose first studio recording in thirteen years is called Sutras.

Donovan Leitch started appearing on the folk scene in the mid 1960s. In fact, he performed at the famous 1965 Newport Folk Festival at which Bob Dylan went electric. He followed with a series of hits, including Catch the Wind, Hurdy Gurdy Man, Sunshine Superman, Jennifer Juniper, and numerous others. Many, including John Lennon, looked upon Donovan as a significant influence with his combination of melodic pop sensibility and lyrics that were a kind of epitome of the flower-child ethos of the Sixties. His songs were covered by numerous other artists, and have become standards to the point that they turn up on Muzak systems everywhere. While Donovan continued making music into the 1970s, his work faded in significance and some would say quality. Though he did still occasionally perform, many thought he had disappeared or retired.

But now he is back with a new record called Sutras, and as the saying goes, it's as if he never left. For Donovan fans, Sutras could probably be best described as Sunshine Superman Volume 2, very much in the musical style of his classic 1967 release, though the lyrics are a little different in direction.

Interestingly Sutras was produced by Rick Rubin, who back in the 1980s was partly responsible for popularizing rap. In recent years, Rubin has been rediscovering or perhaps discovering for his first time real music, and two years ago produced and released on his record label Johnny Cash's acclaimed solo acoustic CD American Recordings. Around the same time, Rubin approached Donovan, who was living in Ireland and making only infrequent visits to the US. Thus the album took two years to come together. Initially Rubin had Donovan record with a band, but then they decided to record Donovan by himself in a solo acoustic setting, then later add some backing musicians, who would adjust their playing to the ebb and flow of Donovon's solo performances. The backing musicians include English acoustic bassist extraordinare Danny Thompson, a founding member of the Pentangle, and more recently heard with Richard Thompson. Also, Benmont Tench of Tom Petty's Heartbreakers on keyboards, Dave Navarro of the Red Hot Chili Peppers on guitar and keyboards, and Steve Ferrone on drums. Their contributions are tasteful and quite subtle.

In a recent Billboard article about the album, Donovan said that Rubin encouraged him to do as much writing as possible for the album. He adds "And like a coach, he would play me my own records and say 'Write me a song in this style.'" And that is what Donovan did. His fans will no doubt hear parallels between songs on Sutras, and especially those on Sunshine Superman. While this is obviously the work of a more mature artist, Sutras contains a surprising amount of that dewey-eyed bliss and Zen-tinged spirituality that marked his songs back in the psychedelic days. But there are also several very traditional-styled love-song lyrics among the fourteen rather short tracks on this CD. The result is an album sure to delight long-time Donovan fans, and perhaps extend his audience to younger listeners. However, he doesn't break any new musical ground on Sutras, other than proving he can be the same appealing flower child who has hardly changed in almost 30 years.

The album begins with one of its several love songs. Please Don't Bend exemplifies the spare, acoustic sound of the album. Donovan is joined by bassist Danny Thompson and the slightest hint of percussion by Steve Ferrone. <<>>

The following track, called Give It All Up is also a love song, with very old fashioned lyrics, and an arrangement that makes it sound like a traditional folk song. This composition could easily become another standard. I could hear it being done in a country style. <<>>

In the Sunshine Superman tradition, there is some influence from Eastern mysticism on the album, which one would expect with a title like Sutras. A short piece called High Your Love is based as the liner notes state, on "a spiritual melody from the Sai Baba community." <<>>

The Clear-Browed One is another piece that recalls the more introspective side of the Sunshine Superman album. With its acoustic setting and pauses, the piece is reminiscent of Guinevere from some 29 years ago. <<>>

One of the most traditional-sounding songs on Sutras is Be Mine, a waltz and a classic, sentimental love song. Donovan's notes say that some of the lines were borrowed from "The Love Songs of Sappho" from the ancient Greek. Here Donovan goes a little over the edge, sounding a bit affected in his delivery. <<>>

The closest thing to a pop song on the album is The Way, whose lyrics are based on a book of Eastern spiritualism. To add the right touch, there is a little electric sitar in the arrangement, along with cellos which have been gracing Donovan's albums on and off since the earliest days. <<>>

Also based on Eastern mysticism is Nirvana, but as even Donovan observed, the lyrics could also apply to Kurt Cobain of the rock band of the same name. <<>>

Sutras contains a song called Lady of the Lamp which also harkens back to the haunting Guinevere. It's one of this laid-back album's quieter moments. <<>>

If there is a throwback to both the sound and mood of the psychedelic days on this album, it's the closing track Universe Am I. Added to the cosmic lyrics is an arrangement that borrows from both Donovan's old albums and the Beatles Sgt. Pepper's. <<>>

Donovan's influence on the music scene has been profound and extends even to some of today's alternative rock artists. So his first new album in thirteen years, is a most welcome development. Sutras could have been recorded anytime in the last thirty years, the sound is so timeless. Rick Rubin's very understated production is outstanding, and puts Donovan in the kind of musical setting his long-time fans will find comfortably familiar, sounding as if he picked up right where he left off after the Sunshine Superman album. Donovan has also written some pleasing new songs that outwardly capture the mood of his seminal music of nearly three decades ago. And despite the obvious maturation of viewpoint that three decades of time brings, Donovan's lyrics can still exude that flower-child innocence of his early work. Depending on one's viewpoint, that might be a cause for criticism, since several of the pieces are quite similar to older songs. But there are probably many for whom the return of this musical institution will be a cause for celebration.

Sonically, the album is well-handled. The mix is almost free from any kind of studio effects, giving a very intimate sound. Unfortunately, there is some audio compression, robbing the album of the kind of sonic airiness that could have made it an audiophile delight.

Donovan's new album Sutras represents the welcome return of an influential artist, and a chance for a new generation to discover his music. But with the album's emphasis on covering the same ground the artist cultivated thirty years ago, Sutras is not likely to leave as much of a shadow as Donovan's earlier works.