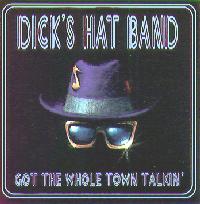 The currently strong revival of the blues has opened the door for a lot of stylistic varieties to make their appearance on the recording scene. The most popular style remains the Chicago-influenced electric approach that most rock musicians take when they want to play the blues. But there has also been a healthy revival of acoustic blues with venerable performers releasing non-electrified recordings, such a James Cotton's recent CD, and up-and-coming acoustic performers like Kelly Joe Phelps and Alvin Youngblood Hart. Another school of the blues getting increased attention is what is sometimes called "jump band" blues. It goes back to the end of the big-band era just before rock & roll took hold, and usually features a horn section and more upbeat, swing-influenced arrangements. The late Louie Jordan provided the prototype for this style which persists to this day, and is thriving through such groups as Roomful of Blues.

This week's album is another recording by a large horn-laden blues group which draws on the jump-band tradition, as well as looking to early rhythm & blues and soul music for inspiration. It's by a group based in Birmingham, Alabama, area called Dick's Hat Band, and their new, second release is called Got the Whole Town Talkin.'

Though Dick's Hat Band got its start in 1989, their two principal members have been playing together for a quarter century. Guitarist Ross Roberts and lead vocalist and harmonica man Mike Lawley have been on the music scene in various capacities for a long time. Lawley was associated with the famous Muscle Shoals Studio scene during its heyday, and wrote a song with Waylon Jennings that won a gold record.

For Dick's Hat Band, Roberts and Lawley enlist a revolving cast of characters. The CD's liner notes list sixty-two people as being members of the "Dick's Hat Band Family," twenty-two of whom appear on this record. There's a seven-piece horn section, plus a quartet of background vocalists, and two separate rhythm sections which apparently alternate on the CD. The liner notes fail to list musicians on each track. With all those players, the music takes on the quality of a classic big R&B revue, and they do it well. But the material is also wide-ranging -- running from big R&B numbers to swingy jump-band tunes, to a B.B. King influenced piece, to New Orleans-style, plus a couple of classic slow blues tunes. Exactly half of the dozen tracks are original by various members of the group. The rest includes both blues standards and more obscure old songs. It's all performed generally tastefully, though sometimes they can wander off into a pop production sound that is slick to the point of undermining their credibility among blues die-hards. But in general, this is a fine recording by a first-rate band that runs toward the more sophisticated side of the blues.

In addition to guitarist Roberts and vocalist Lawley who are the album's only two constants, the rhythm sections include keyboardists Silva Saxon and Ray Reach, bassists Robert "Diggs" Dixon and Joe Breckenridge, and drummers Chuck Tilley and Alan Nettles. A careful listen reveals the differences between the different rhythm sections in this recording which was probably done over a period of months, but one is left guessing who plays when. The co-leaders are both first-rate performers. Fretman Roberts, who also produced the album, is a classy soloist, and Lawley is an appealing vocalist who favors the lighter, more jazz-oriented approach to singing the blues.

The album leads off with an old blues standard I'd Rather Drink Muddy Water, done in a B.B. King influenced style. Roberts' lead guitar is pure B.B. in the best sense, while Lawley's vocal is strong and appealing. The result is one of the album's several highlights. <<>>

The first of the original songs is I'll Fall Down, one of the album's jazziest arrangements. As a composition it's anything but a standard three-chord blues. Though the group, with all the horns, seems ponderously large at times, they can swing like a good big band and also get a little funky too. Both Roberts and Lawley shine on this track. <<>>

On other hand, one of two selections where Dick's Hat Band borders on the excessively slick is Don't Let the Green Grass Fool You. The song has a kind of Motown feel, but the large arrangement with the background singers borders more on Los Vegas than the Motor City. <<>>

Contrasting with that is the title track, You've Got the Whole Town Talkin,' a classic jazzy slow blues, a form Dick's Hat Band proves it can handle with aplomb. <<>>

One of the most interesting covers on the album is the band's version of Chuck Berry's Too Much Monkey Business. The group gives it a New Orleans feel, which fits the song surprisingly well. With New Orleans in the band's regular performing circuit, they get the Crescent City beat just right, large band notwithstanding. <<>> One interesting note is a lyric line they change to make a statement about the music scene in their home town. <<>>

With a similar stylistic approach, and equally successful is an original song called Can't See the Hook, which bears a striking resemblance to the old R&B standard You Can't Judge a Book By Its Cover. <<>>

A band like this wouldn't be living up to its obligations if it didn't include a couple of toe-tapping tunes with a shuffle beat. The best one on this CD is an original called Shanghaied, Crucified and Criticized. Lawley's vocal is especially strong. <<>>

The album ends with another first-rate cover of an old song. Dick's Hat Band's version of Baby Ruth takes the group out in abundant style, with one of the best arrangements I have heard of this great old tune. They show that even a band this big can cook. <<>>

The Alabama-based Dick's Hat Band has been touring up and down the Midwest from Illinois to Louisiana since 1989 with an evolving cast of characters led by guitarist Ross Roberts and singer Mike Lawley. Their new second release shows them in great form, taking the art of the large blues and R&B band and keeping it vital in the 1990s. While not as purist to the old jump-band and R&B tradition as Roomful of Blues, Dick's Hat Band brings first-rate musicianship and better lead vocals to the equation. Dick's Hat Band are versatile, sometimes to the point of straying too far into commercial-sounding pop. But for the most part, what they do, they do very well, with lots of polish.

Sonically, the album decent is but a bit inconsistent. A couple of pieces have a synthesizer trying to imitate an acoustic piano, detracting from the otherwise authentic sound, while at other times a real piano is heard. While the sound is usually clean and free from excessive processing, mix on several of the selections doesn't integrate the instrumentation very well into a coherent sound -- with for example, the drums having one kind of quality, the horns another, and so on, as if the players were isolated from each other. It's a minor quibble, but a blues band this good should sound as tightly integrated as they play.

While many rock fans still think of a rough-edged power trio as the way to play the blues, Dick's Hat Band shows how good a large, sophisticated horn-laden blues can be in the 1990s.