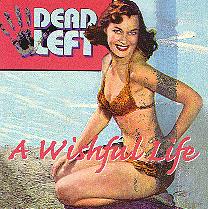 Two guitars, bass, drums and some vocals: that's about as basic a rock band as you can get, and definitely the most common a configuration one will find, with literally thousands of such quartets across the country, found in every little town. The format has a lot of possibilities, from country to heavy metal to alternative grunge to jazz, but because the field has been mined so thoroughly, it's hard to come up with anything very new. So it requires creativity and musicianship to distinguish oneself in as crowded a field.

This week, we have one such group that takes the familiar four-piece rock band format to interesting places with a combination of tasteful playing, very good writing -- with the emphasis on the musical aspects of the compositions -- and appealing vocals. The group is based in New York, and they call themselves Dead Left. Their new CD, their second independent release bears the title A Wishful Life.

After hearing this outwardly simple but musically intriguing record, it did not surprise me to discover that the group's founders came out of the Berklee College of Music in Boston, one of the country's best music schools that is strong on composition. Guitarists Aaron Stroessner and Zeke Zima met at Berklee and were friends and played in various groups there before both moved to Brooklyn, where they formed Dead Left in 1995. After some initial personnel changes, the group was filled out with bassist Bob Roe and drummer Brian Delaney who had played in bands together in Texas. They set out recording the usual demo tapes in early 1995 and eventually released a limited distribution independent CD called Most Anything.

Now they are out with A Wishful Life, a full, though still relatively short, CD that nicely captures the group's clever but unpretentious jazzy, folky pop. It's jazzy from the interesting chord structures, rather than from any swing beat. And it's folky from the clean jangly guitars, and mellow, up-front vocals by Stroessner. There's also an occasional funky beat, some Beatles-influenced vocals, and some bluesy slide guitar. Lyrically, the group covers fairly familiar ground with a number of love songs, colored by the group's slightly tongue-in-cheek attitude. But musically is where Dead Left shines -- the compositions are really interesting -- three chord rock, this is not. The musicianship is very tasteful, even though in this mostly live recording, one can hear some of the slight imperfections that good improvisation inevitably brings. And that is another really appealing aspect of this CD: its musical honesty and avoidance of commercial slickness. The clean, tastefully understated production relies on the pure musicianship of this quartet instead of any studio gimmicks. If I had to draw an analogy, Dead Left is a bit reminiscent of a group that some of our listeners may recall from their appearance on WVIA, Huffamoose, before the latter group's music was lost in the production of their second CD after they signed to a major label.

A Wishful Life gets under way with My Favorite Waitress, not the most creative composition on the record, but typical of the group's musical cleverness. There's a curious blend of influences from Beatles to Allman Brothers. <<>>

On the other hand, a track called Take for Granted shows Dead Left at their most interesting. The laid-back sounding tune is deceptively simple but quickly lodges itself in one's head <<>> before it takes a departure into a vaguely unsettling guitar solo at the end. <<>>

Lyrically, Dead Left turns its attention to the state of the world on the track Evening News, an upbeat pop song with occasional bits of musical dissonance presumably to underscore the tone of the lyrics. <<>>

The group's one concession to additional production comes on To Take My Place, which employs the services of a string trio, that like the rest of the album, is unpretentious and tasteful. <<>>

Dead Left's strength in writing is also highlighted in My Friend another outwardly simple piece that is full of interesting musical twists and turns. Its economically poetic lyrics are in keeping with the conflicted, bittersweet mood of the tune. <<>>

My own favorite piece on A Wishful Life is Weight of My Beliefs, which combines the group's best lyrics with a fascinating tune that is constantly shifting harmonic colors and moods. <<>>

Probably the closest thing to a pop song on the CD is In My Reach. Despite being one of the slower tracks on the recording, the song has a memorable riff and lyrics with potentially wide appeal. Still, the group keeps the arrangement understated, except for some overdubbed backing vocals, sung by Stroessner. <<>>

The album ends with Tell Me Why, with the Dead Left's most downcast lyrics, which sound like the work of someone suffering from a bit of depression. Still, the group maintains their appealing musical cleverness. <<>>

A Wishful Life, the new CD from the New York based quartet Dead Left takes the outwardly simple and very familiar format of a rock quartet with two guitars, bass and drums, and creates interesting and appealing music. The group's composing is its strongest facet. Every piece on the CD has some inventive turn, from the jazzy harmonic structure to melodic lines that don't go where you would expect them to go. Aaron Stroessner's vocals are very likable, and the band's overall musicianship is thoroughly tasteful.

The album's production, by the band itself, and the recording, made in guitarist Zeke Zima's own studio, adds much to the unpretentious, honest sound of the CD. The recording is clean and unfettered by needless or trendy studio effects, and it really sounds as if the songs are being played in real time, rather than being constructed with multiple overdubs. That's refreshing in this day and age, and in keeping with the band's musical integrity.

Dead Left serve as a good reminder of how a very familiar musical configuration can be made to sound fresh again.

© Copyright 1999 George D. Graham. All rights reseved.
This review may not be copied to another Web site without written permission.