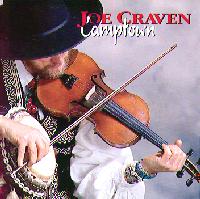 World fusion seems to be one of the current growth areas in creative contemporary music. Influences from cultures other than American or European sources are even finding their way into some commercial pop records. But off in the part of the music world we inhabit on this radio program, the mixing of cultures and traditions is something a significant number of creative musicians are plunging into with great enthusiasm. Of course, while sometimes the mixing of previously disparate sounds can produce brilliant results, at others it can come off as contrived or downright pretentious. The dance music scene seems to have produced some of the former, while the New Age scene especially seems to have attracted a few lesser artists who try to incorporate other cultures into their music without a good understanding, and then try to sound serious in their endeavors, with the result being stilted or even pompous.

This week's album is another wild stylistic melange of World Music, approached from a direction which is itself a fusion of styles. It's the new album by multi-instrumentalist Joe Craven, entitled Camptown.

Joe Craven's musical specialty is what has come to be called New Acoustic music. It started when bluegrass musicians experimented with playing jazz and other non-traditional tunes on their string instruments. The father of New Acoustic Music is generally acknowledged to be mandolinist David Grisman, and Georgia-native Craven has been part of Grisman's group for seven years now. A lone-time San Francisco-area resident, Craven was a member of a fine, but short-lived trio called Way Out West, and also has been part of Davol Anger's group Psychograss. He has played as a studio musician on over 80 albums, including records by Alison Krauss, Bonnie Raitt and the Turtle Island String Quartet. Craven plays all manner of string instruments, including most frequently and mandolin and fiddle, along with percussion. Along the way he has attracted a lot of fans especially among his fellow musicians.

Now Craven is out with his first solo album Camptown, the premise of which is to play traditional folk tunes, including Irish and American classics you hear at every folk festival, and serve them up in unexpected styles from Latin and Caribbean to Middle Eastern to Japanese. The result has the potential to be a disaster -- I am reminded of the days of the late 50s and early 60s when what is now being called "space age bachelor pad music" was being made, consisting of hideous instrumental versions of pop and standard songs done in so-called exotic styles with a bunch of randomly added percussion, and musicians who didn't have a clue about the styles they were playing. Though Joe Craven may not have mastered all the intricacies of say classical Indian or traditional Japanese music, the thing that sets Camptown apart from most cross-cultural fusion is its spirit of good fun. Despite the mostly acoustic instrumentation and generally light percussion, this a very danceable album, and the tracks are almost all upbeat and sound -- well -- happy. The arrangements favor cleverness over ambition, and when they don't work particularly well, with does happen on the couple of occasions on the CD, it's still fun to listen to.

Craven proves his multi-instrumental mettle on this CD, overdubbing several parts on each piece, and literally playing the contents of the kitchen sink in addition to his fiddles, mandolins, ukulele and inventory of percussion implements. He is joined by different guests on every track, including most frequently bassists Todd Phillips and Derek Jones, and keyboard man Peter Elman. But the main focus is on Craven, who does some very tasteful playing, and always sounds as if he is having a good time.

Camptown begins with one of its more enjoyable pieces, which sets the pace for the album. Soldiers of Joy is a tropical reworking of the traditional American fiddle tune Soldier's Joy in a medley with Leather Britches. Craven, in his liner notes, cites inspiration from South African sounds and plays an African talking drum in addition to his mandolin, but one can hear a fair amount of the Caribbean in the arrangement. This is the only tune with an significant amount of vocals. <<>>

Another worthwhile track with African influence, is Rites of Man, the traditional Irish tune, given an African approach to the 6/8 meter, which is also time signature of the Irish jig. <<>>

One of the musicians who was a great influence to David Grisman and the New Acoustic pioneers of the 1970s is the Gypsy jazz guitarist Djanjo Reinhardt and his Quintet of the Hot Club of France. Craven pays tribute to Reinhardt and his violinist partner Stephane Grappelli with a distinctive arrangement of one of traditional songs you would perhaps be least likely to expect in this kind of setting. Turkey in the Straw is transformed in what Craven calls Hot Turkey by putting the tune in a minor key and giving it a swingy rhythm. The guest accordionist on this track is Jim Boggio. <<>>

The title piece, the Stephen Foster classic Camptown Races is shortened to Camptown and given a Brazilian spin. Though the tune is danceable and fun, this is one instance where Craven and company don't quite capture the spirit of the original style. The percussion sounds seem randomly thrown together, and the group just doesn't quite hit the right samba groove. <<>>

Another Latin American stylistic fusion is a lot more successful. The album's lengthiest piece is called Combolé and it's a medley of two traditional tunes, Sail Away Ladies, and Paddy on the Turnpike. They are given a great salsa treatment, with the help of pianist Dave Matthews. <<>>

Closer to home in influence is a track called The New Iberians, a set of three tunes done Cajun style. There is much more of a cultural connection between the original folk songs and the style of performance here, and the result is enjoyable. <<>>

For me, the least successful track is Star of County Down, done in an ersatz traditional Japanese style. Without the lively dance rhythm of the most of the other tracks, the piece comes off bordering on the pretentiousness that afflicts some New Age artists doing similar things. <<>>

An exotic mix that does work better for me is Old Joe's Delhi, a transformation of the American folk song Old Joe Clark into old Delhi in India. It's not really classical Indian, but ever since George Harrison, transmogrification of Indian music has become more or less accepted, and Craven and his tamboura player Piper Heizig, do the arrangement with a light touch. <<>>

The contents of the kitchen sink come into play on Kitchen Girl, which is given as much of a hip-hop beat as bluegrass musicians can muster. Craven uses a cheese grater, silverware tray and a drinking glass for his percussion. <<>>

The album goes out with Bonaparte, based on Bonaparte Crossing the Rhine, with Stephen Kent of the Beasts of Paradise band playing his digderidoo in place of a bagpipe in the arrangement. At first, it threatens to be another of the profligate number of trendy New Age tunes using the Aboriginal Australian instrument, but the piece turns around when Craven plays a marching drum and a fife -- actually a piccolo -- makes an appearance toward the end. <<>>

For the past decade, Joe Craven's fiddles, mandolins and percussion have been adding to the sound of New Acoustic Music. Now he is out with his first solo album that's a fun romp through stylistic mixtures, or perhaps, cultural collisions. While understandably this kind of experimentation is not always one hundred percent successful, it works remarkably well the great majority of the time. Craven's outstanding level of musicianship plays a big role, but also so does his attitude -- he approaches the mixture of styles as something fun to do, to make music you can dance to, rather than being intended as some kind of serious high art. At the same time, Craven also manages to walk the line deftly between interesting, creative music and novelty material.

From a sonic standpoint, the album is also worthy of praise. Despite all the multitracking, the production doesn't sound mechanical, and the mix is clean, free of needless studio effects, and relatively unafflicted by compression.

Joe Craven on his new album Camptown, has created a stylistic conglomeration that is distinctive, creative and fun.