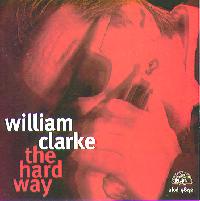 There are certain instruments that seem to be associated with specific styles. The vibes, for instance, are rarely heard outside of jazz, while the bagpipes are associated with Celtic music, and the five-string banjo with bluegrass. The blues has its own distinctive instrument: the amplified harmonica. The harmonica, of course, has a long history in various, usually folk-related styles, because of the harmonica's inexpensive price and easy portability. With the blues' origins in the poverty of the rural South, it's easy to see why the harmonica would find a home in the music. But when the blues went electric in Chicago, the harmonica players needed something to keep up with the electric guitars, so they played their instruments they call harps into a microphone, usually a cheap setup cranked up to where it would distort the sound. The blues pioneers like Little Walter and Sonny Boy Williamson put that electrified sound to advantage, just as electric guitarists defined new sounds on their amplified instruments.

One of the best of the current generation of harmonica players these days is California-born William Clarke, whose new album is called The Hard Way.

The 45-year-old Clarke is a native of Inglewood, California, who as he was growing up, took an interest in the composer's credits on the early Rolling Stones albums, which featured the band's versions of blues standards. By his teens he decided that being a bluesman was his career goal. He took in the music of West-Coast-based performers like T-Bone Walker, Eddie "Cleanhead" Vinson and Willie Mae "Big Mama" Thornton. He later apprenticed with Chicago harmonica masters Shakey Jake Harris and George "Harmonica" Smith. Like Smith, Clarke specializes in the chromatic harmonica. From the late 1970s through the 1980s, Clarke recorded as a sideman with others and released five self-produced independent albums before he started getting some national attention, including winning six W.C. Handy blues award nominations. Since 1990, Clarke has been recording for the Chicago-based blues label Alligator, and releasing some fine albums that combine hot playing with some of the West Coast cool that was part of the blues scene in Clarke's home state.

His new ninth album, The Hard Way, represents an evolutionary change. It's his most jazz-influenced record, embodying swing and straight-ahead jazz elements. It includes a couple of tunes that are considered jazz, rather than blues, standards. At the same time, his harmonica tone is more aggressive and electrified than ever, while his vocals on this record are probably his strongest yet. The result is a first-class blues album that swings a good part of the time, but has the raw bruising electric energy of the old Chess Records sessions out of Chicago.

Clarke writes in his liner notes that he has been a long-time fan of jazz organ combos featuring the tenor sax. He aims to bring some of that swinging, bluesy feel to this new record, though with the organ being so ubiquitous in both jazz and blues these days, it is surprising that there isn't one on this record. Horns, however, are prominent. On The Hard Way, Clarke is joined for the most part by his regular touring band, which plays over 200 shows a year with him. They include Jeff Ross and Greg Virginio on guitars, Eddie Clark on drums, and Rick Reed on acoustic bass, which adds a more authentically swingy touch. Guests on this Southern California recording include Steve F'dor on piano, and Jon Viau and Troy Jennings on saxophones. Clarke produced the album himself.

The majority of the material is original by Clarke, but it also includes a range from a blues standard by Muddy Waters to the Count Basie classic Moten Swing. And jazz fans will recognize quotes from tunes including Duke Ellington's C-Jam Blues and Charlie Parker's Yardbird Suite.

In the tradition of a live blues show, the album begins with a strong instrumental called The Boss, which Clarke says was inspired by Willis Jackson. It represents this album's swingy but aggressive blues hybrid, with Clark's giving his harmonica the full electric treatment. <<>> He and the added saxes break into a bit of Ellington's C-Jam Blues. <<>>

The first of the vocals is a cover of a tune by Mercy Dee Walton, Five Hard Hand, which takes Clarke and band squarely into Chicago blues territory. <<>>

Another facet of the album comes out on Letter from Home, one of the CD's finest tracks. It's also a cover, in this case by Ray Brown, and it has the sound of late 40s jump-band music and early rhythm-and-blues. This track features alternate rhythm section personnel, and swings the best of anything on the album. Clarke's highly electrified harmonica contrasts with the rest of the sound of the track, but his vocal performance shows what a great blues shouter he can be. <<>>

Clarke and his band show Chicago-style blues credentials on their version of Muddy Waters' Evil. The track is another highlight of the album, with especially strong performances by Clarke both vocally and on his harp. <<>>

An original song called Respect Me Baby has an almost rockabilly beat, which adds more stylistic variety, though it's hardly the album's strongest track. <<>>

Another jazz quote comes out on Fishing Blues, an original song, and not the traditional tune made famous by Taj Mahal. In this case it's Charlie Parker's Yardbird Suite that comes out in the opening section to this swingy song that has a bit more of an acoustic sound on Clarke's harmonica. It's another worthwhile track. <<>>

Though Clarke's ventures into jazz and swing are usually successful, one track does fall short, especially to those who ever heard the Count Basie band do Moten Swing. The whole Basie band could swing a lot better than Clarke's small group. Though Clarke puts in some great harmonica work, the rhythm section seems to be laboring and sounds stiff. <<>>

If there is one track you might want to program your CD player to skip it's Don't Treat Me Wrong. If it weren't for Clarke's harmonica solo in the middle, it sounds as if the band was having a bad day. The shuffle rhythm is clumsy, Clarke gets carried away with too much affectation on his vocal and even the mix is out of balance. <<>>

The album ends with another jazzy instrumental, Walkin', a piece made famous by Miles Davis. The band swings better here and Clarke puts in some excellent playing, blending nicely with the horns. <<>>

William Clarke's The Hard Way is another worthwhile album featuring this impressive harmonica man and strong blues singer. More so than his previous work, this record takes a decided direction toward jazz and swing influence, recalling an earlier day when the first rhythm and blues came out of the end of the big-band era. At the same time, Clarke's harmonica sound is clearly out of the Chicago electric blues school. The results are somewhat mixed. Sometimes the band can really swing, especially the alternate rhythm section of guitarist Steve Shultz, pianist Fred Kaplan bassist Tyler Peterson and drummer Bob Newham, who appear on just one track. But sometimes the regular band can't quite get the rhythmic lightness that marks the best swing. Overall, however, the performances are first class, especially from Clarke whose harp work is marked both by intensity and some understatement.

Sonically, the album is a bit of a disappointment. Clarke mixed the record himself and he went overboard trying to emulate the sound of old Chicago blues records, with all their sonic problems. Especially annoying is occasional distortion in the vocal, and an acoustic bass that sounds like an electric bass. In my own two decades in the recording studio, I've learned the rule that you should never let the lead singer do the mix, they always put too much electronic effects on their singing, and either bury their voice or have it too high in the mix. This album is a confirmation of that.

Nevertheless, if you like hot Chicago-style harmonica and blues that swings, this album fills the bill nicely.