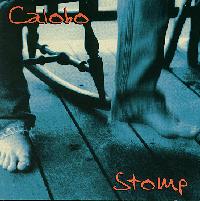 For those of us who still remember the 1960s, there remains a certain spirit and atmosphere to the music of the period, a kind of difficult-to-describe "something," that even subtracting the tenor and turbulence of the times, sets it apart from most of the music that has followed. But it's not just the Baby Boomers who are attracted to that kind of musical quality, which incorporated elements of improvisation, experimentation, good-natured fun, and what could be described as "tripiness." The Grateful Dead, who perhaps more than any other group personified that ethos, attracted several generations of fans, including those among the alternative rock demographic. Today, Phish continues some of that tradition, and a good number of younger bands, such as Rusted Root, are going after that sound and spirit.

This week we have another excellent example of a group which has already attracted a considerable following in their native Pacific Northwest to their brand of folky, bluesy, improvisation-laden music that hints at the psychedelic era. The Portland, Oregon based band is called Calobo, and their new, fourth CD is entitled Stomp.

Calobo as a band got its start in the early 1990s, but the two founding members have been friends since childhood. Caleb Klauder and David "Hobo" Andrews played music together growing up on Orcas Island in Washington State. They combined their nicknames into the group monicker after they started performing on campuses in Oregon, while attending different colleges in the state. They followed the usual route of pursuing original music, and started adding band members. By now the group is up to a septet with Jenny Conlee on piano, Kenneth Erlick on electric guitar, Michelle Van Kleef on vocals, Nate Query on bass and Brian Bucolo on drums, with the founders, Klauder and Andrews both playing acoustic guitar, and Klauder also doing some mandolin.

Calobo has developed a reputation for their live shows -- regularly filling good-sized venues in their hometown and throughout the Northwest. And the group does it by embodying some of the spirit of the Grateful Dead, Allman Brothers and early Jefferson Airplane, without necessarily copping any licks. The music has an appealing ebb and flow, giving a good chance for instrumental improvisation, while holding to straight-ahead folk and classic rock influences, and avoiding anything smacking of Nineties pop. Though the individual tracks on the CD are not all that lengthy, one could easily imagine the band doing extended jams on the tunes in performance. They also hold some of the attitude of the Sixties rockers: releasing their own music on their own very independent record label. The result is great listening that is likely to win fans of Calobo's own generation and their Baby Boomer parents.

Acoustic instrumentation remains at the center of Calobo's arrangements, while rhythmically, there is sometimes almost a latin feel reminiscent of Santana, or the kind of breezy syncopated beat for which the Allman Brothers Band was known. Lyrically the band is intelligent and poetic if not exactly profound. Calobo's music is very much centered on its instrumentation and interplay among the musicians. The group describes their own music as "acoustic groove."

Stomp gets under way with a piece typical of that direction, and with a title that seems straight out of the Sixties, What Is Real. Michelle van Kleef does the lead vocals, while Klauder plays his mandolin in this vaguely latin-tinged song written by bassist Nate Query. <<>>

Somewhat folkier is the following track, Back in Time, written and presumably sung by David Andrews. In a way, the song's title could be a metaphor for the band's musical philosophy. <<>>

Another welcome little idiosyncrasy from the 1960s that Calobo brings into its music is a bit of classical influence, which can be heard in Jenny Conlee's introduction to Klauder's Bright Day. <<>> Otherwise it returns to the group's attractive acoustic-electric mix, with some melodic departures and opportunities for improvisation that sound as if the band could develop into an extended jam in performance. <<>>

While most of the album's tracks are under six minutes, they do allow themselves one more extended outing. Mood Swing Stomp puts the time to good use as the track evolves from something resembling Crosby Stills and Nash's Wooden Ships <<>> to a kind of vaudeville swing. <<>>

Speaking of swing, that is the direction taken on Down in My Old House, whose lyrics seem to deal with recovering from substance abuse and settling down to a good family. This is one stylistic area where the Calobo falls a bit short in execution, though the arrangement idea is certainly a good one. <<>>

While Calobo recalls Sixties groups without directly copying anything, their influence by the Grateful Dead and the Allman Brothers is rather unmistakable on Slow Train, especially in its eminently enjoyable instrumental section. <<>>

Ms. Van Kleef does the lead vocal on For Avalon a slow waltz which takes a slightly country direction that constrasts with its philosophical love lyrics, showing another facet of the band. <<>>

The album closes with What Time Is It, another title that sounds as if it came from the psychedelic era, with lyrics to match. <<>>

The seven member Portland, Oregon-based band Calobo, on their new fourth CD Stomp, brings to national audiences the appealing music of this group that has its heart lodged in the spirit of the 1960s, as embodied by the Grateful Dead, Allman Brothers, Santana or Jefferson Airplane. They join a growing number of younger bands who look to their parents' music for inspiration, though unlike some of the "retro" bands, Calobo uses those groups as a source of inspiration, rather than a exact template for their sound. The breezy rhythms, underlying folk influence and first-rate musicianship that allows the band create enjoyable instrumental jams, makes Calobo one of the best in the genre. Their original material, written mostly by Klauder and Andrews is also top-notch: lyrically intelligent and musically substantial.

For production and sound quality, we'll give Stomp and A-minus. The clean, unfettered sound is free from excessive studio effects and avoids that commercial "big rock" sound. But at the same time, it is not quite as refined sonically as it might be, and there was unnecessary compression in the mastering process.

Calobo has been a regional hit in their Pacific Northwest home-base. Perhaps with the wider distribution of their new fourth CD Stomp, the group will win some well-deserved national audiences. It's one group that looks to the past for its musical attitude and gets its right.