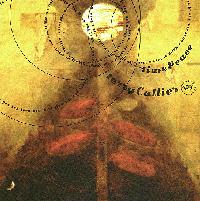 The late 1990s is a very active period in the revival of musical styles from the past, no matter how obscure. From twangy rockabilly to psychedelic rock to late 1940s rhythm-and-blues, to dozens of other styles, if you look hard enough, chances are you'll find a rather good new record spotlighting the genre, either authentically or as an inspiration for a new stylistic variation. While much of this revival is coming from younger artists taking up music that was popular perhaps before they were born, occasionally, one of the original artists comes along with a significant new record that proves that both the style and the artist are still active and creative.

This week's album features a fairly obscure style that has not been heard in quite a while, from an artist who has not heard on record for 19 years, and a relatively obscure artist at that. But the result is an exceptionally fine recording that comes across sounding quite fresh. The album is Time Peace by Terry Callier.

Chicago native Terry Callier has a long career that goes back to a debut album in 1968. Callier as a child, growing up in the notorious Cabrini-Green housing project in the Windy City, showed some musical ability and had several years of piano lessons. But it wasn't until college in the early 1960s, where his dorm room was near a student who owned a guitar, that Callier took up that instrument and started learning traditional folk songs, in the days of the Sixties folk "boom." In 1964, he was spotted in a blues club in Chicago playing his acoustic music by Sam Charters, then of Prestige Records, who the following year recorded Callier's first LP, entitled The New Folk Sound of Terry Callier. The record wasn't released until 1968, when by then his acoustic sound had been replaced in the public ear by the electric folk-rock of the period.

In 1970, Callier and his songwriting partner Larry Wade began working with soul star Jerry Butler and his Chicago Songwriter's Workshop. Callier and Wade wrote several songs which became hits, including The Love We Had Stayed on My Mind, which was made famous by the Dells in 1972.

After that, Callier began a series of albums under his own name, starting with Occasional Rain in 1973 and concluding with Turn You to Love in 1979. His music was a breezy blend of folk influence, including articulate lyrics, plus soul and jazz. But like many during the period, some of his records succumed to the disco influence of time. In 1983, he dropped out of the music business to help raise his family and to begin a new career as a computer programmer for the University of Chicago, where he also completed a degree in sociology by taking night classes.

One day in 1991, he received a call from England from some dance remixers and people on the so-called "acid jazz" scene, who were interested in releasing his old albums in the UK. He began making pilgrimages to England to perform, and that eventually led to the revival of his recording career. Parts of Time Peace were recorded in England.

This sort of folky, jazzy and soul-influenced style was also taken up occasionally by such people as Richie Havens, Taj Mahal, early Joan Armatrading and Gil Scott-Heron. On Time Peace, Terry Callier gives us one of the finest examples of the genre, with tasteful musicianship, an often atmospheric sound and Callier's outstanding vocals. Lyrically, the album seems a period piece, with his songs about peace, love and being positive to overcome adversity, racial or otherwise -- the old-fashioned values of idealism that have hardly been heard since the last Gil Scott-Heron album.

Joining Callier is a variable group of musicians, mostly from the Chicago area, with notable cameo appearances by Pat Metheny Group drummer Paul Wertico and harmonica virtuoso Howard Levy. Also making an appearance on one track is jazz saxophone great Pharoah Sanders, who worked with Callier many years ago. Like the concept albums of yore, Callier divides his CD into two sections, "Time" and "Peace" with one track serving as an overall introduction. Most of the music consists of new original material, but he does parts of tunes from the 1960s, Curtis Mayfield's People Get Ready, and, interestingly, The Love Theme from Spartacus.

The introductory track is called Ride Suite Ride, which sets the pace for the album, with its laid-back folky, soulful blend highlighting Callier's warm, appealing vocals. <<>>

One of the album's most striking pieces is the eight and a half minute Lazarus Man. The atmospheric arrangement centered on Callier's acoustic guitar along with the artist's half-spoken, narrative vocals make for fascinating listening. <<>>

Another track recalling memorable music of the past is Keep Your Heart Right, with its bossa nova beat, jazzy sound and positive lyrics. <<>>

Callier does a song called Traitor to the Race which is done as a rap, with soul-style backing vocals. The message seemingly is straight out of the black pride movement, but it's universal. <<>>

There are also some love songs. Another highlight is the jazzy latin-influenced C'est a Vie. <<>>

In the "Peace" section is a song that one could imagine a country rock band doing, Coyote Moon. Callier and company take an interesting approach with spacey guitars and the plaintive harmonica of Howard Levy, formerly of the Bela Fleck's Flecktones. <<>>

The version of the soul classic People Get Ready comes as part of the track Brotherly Love, <<>> which takes a turn toward the jazzy in its ending section. <<>>

The other cover of a tune from the 1960s is Love Theme from Spartacus. I had not previuosly heard the lyrics from this movie tune that has become something of a standard for jazz musicians. While Callier plays acoustic guitar for much of the record, the guitarist here is John Moulder, while Callier concentrates on the singing. <<>>

The track featuring saxophonist Pharoah Sanders closes the album, and it has another title that sounds if it came from the optimistic 1960s actually a three-part title, TimePeace/No One Has to Tell You/Build a World of Love. Naturally, with Sanders the track has a distinctly jazz sound. The saxophonist seems to inspire Callier to a higher vocal energy level. <<>>

Some might be tempted to call Terry Callier's new CD Time Peace a throwback to the 1960s with its jazzy, soulful sound, and especially its lyrics that dare to talk about peace and love and hope. But this particular style never made much of an impact on the commercial music scene of the day, and after such a long period of inactivity, Callier and his music now seem fresh and vital today. The musicianship is outstanding, Callier's vocals are absolutely first-rate and wonderfully memorable. What he sings about may be considered a relic of the past in the cynical or just-plain-dumb 1990s, but one comes away from the record feeling positive, without the music reaching the point of being sappy. Callier is a literate lyricist and first-rate composer, and his music now comes across as having a timeless aura.

The album's sound quality is also first-rate. The recording was produced by Brian Bacchus and mixed by James Nichols, who really enhanced the atmospheric arrangements with their sonic approach. The dynamic range is also very good.

It has been about 19 years since Terry Callier released his last album. His fine new CD Time Peace marks a most welcome return.