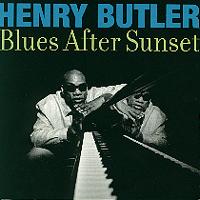 For the casual blues fan, the instrument that most defines the style is the electric guitar, followed by the harmonica. Of course before the electric guitar, there was the acoustic instrument on which the form developed. But with almost as long a history in the blues is the piano. Most of the early Bessie Smith recordings in the 1920s had piano accompaniment. And over the years, blues pianists have made notable contributions.

New Orleans, which also lays claim to being the birthplace of jazz, has had an especially rich tradition of blues- and rhythm-and-blues pianists, with artists like James Booker and Henry Roeland Byrd, better known as Professor Longhair, defining a unique bluesy piano style associated with the Crescent City.

This week we have a remarkable blues album that seems to break a lot of stereotypes. It's the latest by pianist Henry Butler entitled Blues After Sunset.

Henry Butler was born in New Orleans and was attracted to piano at an early age. Blind since infancy, Butler by age seven was already pursuing music, studying piano and performing with the glee club at the Louisiana School for the Blind. By age 14, he was performing professionally, and in high school studied voice, which would be his academic direction. In college at Southern University in Baton Rouge, he played piano and was mentored by New Orleans jazz great Alvin Batiste. He earned a master's degree in classical voice from Michigan State. He returned to New Orleans to teach in 1974, and to be taught by such masters as Professor Longhair himself.

Butler moved to Los Angeles in 1980 working as a talent development person for Motown records, and also attracted attention as a jazz pianist, recording two LPs in the mid 1980s for the Impulse label, records which won him much critical praise and marked him as a major upcoming talent to watch in the jazz world. But his heart was also in the blues, and his recordings for Windham Hill and Atlantic moved back and forth between jazz, blues and funk styles.

Now he is out with a pure blues record, and Blues After Sunset is an exceptional recording that combines Butler's prodigious piano technique, and rigorous vocal training with the kind of authenticity that comes from growing up on the music in the city that calls the style home. Making it even more distinctive is the fact that it is mostly a solo record -- just Butler, his piano and vocal, with some help on several tracks by harmonica man Mark "Kaz" Kazanoff and/or New Orleans blues guitar veteran Snooks Eaglin.

One listen to this record will probably open many an ear to the blues potential of a big old grand piano. Butler combines amazing technique and strength with a flawless groove, and a lot of the musical ingredients that make New Orleans piano what it is. Of course, few of even the New Orleans masters had the kind of virtuosity and broad range of influences from stride to boogie to gospel to harmonically complex jazz that Butler brings to his playing. And though singing the blues may be many stylistic miles from the Schubert lieder that he studied in graduate school, his vocals also combine authenticity with the facility that great technique provides. He also writes some first-rate tunes, with eight of the CD's twelve tracks being original.

Typical is the rollicking opening piece, a high-energy Butler boogie called I've Got My Eyes on You. One might expect smoke to be coming from the piano the way he plays, but the almost athletic approach to the keyboard maintains a irresistible groove and is full of interesting and occasionally unexpected ideas, while he clearly enjoys doing the vocal. <<>>

Butler pays tribute to Professor Longhair with a tune by "Fess" called Baby Let Me Hold Your Hand, with Snooks Eaglin on the guitar. Butler growls out the vocal while his right hand captures the syncopated rolls that are one of the hallmarks of New Orleans piano, Professor Longhair style. <<>>

Featuring Mark Kazanoff's harmonica as well as Eaglin's guitar is another Butler original, I Really Love You. Even though the tempo is a little slower, Butler puts his powerful technique into this slower boogie. <<>>

Closer to the mainstream jazz for which Butler was first known, is a superb piano solo called Blue Moments, in the classic slow blues form. Butler shows a wonderful combination of depth and playfulness in his performance that should be required listening for students of blues piano. <<>>

Another tune associated with Professor Longhair is Tee Na Na. Butler's version builds on the classic New Orleans style, but throws in a lot of interesting little twists. Eaglin's tasteful guitar work and great succinct solo do tend to get upstaged by Butler's full-tilt piano. <<>>

Gospel forms a strong undercurrent in Butler's piano style. Blues After Sunset includes a classic old spiritual Death Has No Mercy, which on which he sheds a new light. Again, the result is hard to forget. <<>>

Somewhat more conventional in form is an original piece, The Marriage Song, done with Kazanoff and Eaglin. It's a song with good lyrics, done as a great, relatively relaxed boogie. With Butler's left hand, no rhythm section is required. <<>>

Bourbon Street Blues, is an original piano solo by Butler which has a lot of ragtime and early blues piano influence. It's also a fascinating study in the development of the New Orleans style, with Butler gradually adding more New Orleans touches as the piece goes along. <<>>

Probably the most eclectic track on the CD is an original instrumental called Tetherball, done as duet with Kazanoff. As Kaz plays the simple harmonica riff over and over, Butler does the most amazing piano hops, skips, jumps, pirouettes, and musical somersaults over the poor harp player, occasionally hurdling into near avant-garde jazz. <<>>

The album ends with another traditional blues standard, C.C. Rider, which again is given some unconventional twists. Kazanoff is featured on the harmonica. <<>>

A great number of people think that the blues must be played on an electric guitar by a self-taught musician singing about his experiences. Henry Butler is an acclaimed jazz pianist with remarkable technique and a master's degree in classical vocal studies. But he plays the blues with an authenticity as valid an any of the masters, having grown up in New Orleans and absorbed its rich musical heritage. And he brings his exceptional technique and breadth of knowledge of musical styles and history into this amazing album, on which his piano alone has more energy and drive than entire electric blues bands. With tasteful contributions from Mark Kazanoff and Snooks Eaglin, Blues After Sunset, is the kind of record that both impresses and delights.

The album gets an "A" from us in the sonic department. Electronic processing is held to an absolute minimum and the piano sound is full and rich, nicely capturing Butler's impressive playing. Interestingly, it was recorded in a recital hall on the campus of Loyola University.

Henry Butler has received a lot of accolades previously in his career as a jazz pianist. His new album proves that he is at least as hot a blues player as a jazz musician. It's also great way to come to appreciate really good blues piano.