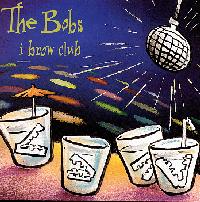 The Bobs: I Brow Club -- by George Graham

Over the centuries of making musical instruments, from the earliest wind instruments to the most sophisticated synthesizers, it has always been something of a goal to reproduce the expressiveness of the human voice. Perhaps because of the explosion of technology, and as a reaction to it, acapella singing, without the aid of any kinds of instruments, has enjoyed a revival over the past several years. In fact it was almost a decade ago that Bobby McFerrin had his surprise acapella hit Don't Worry Be Happy. While McFerrin has been a real innovator in making creative new sounds with the human voice, for more than 15 years, a San Francisco quartet has been pushing the envelope on acapella singing both in terms of technique and lyrical material. The Bobs have just released their approximately tenth album, depending on which of their various recordings you count. The new one is called I Brow Club.

The concept of the Bobs, whose name comes from the dog-show term "Best of Breed," is very simple: people singing unaccompanied. Everything from Gregorian chant to doo-wop to glee-clubs to barbershop quartets have done it for a very long time. But the Bobs add a distinctly contemporary bent to their approach. They used to call their music "nu-wave acapella" back when New Wave wasn't so old. Like Bobby McFerrin, the Bobs use lots of non-standard singing techniques to create sounds that simulate instruments -- turning on its head the goal of instrumentalists to sound like voices. They have developed a remarkable level of technique, which is especially evident when they do their arrangements of familiar songs. But the Bobs usually do original music, and their specialty has been humorous and often lightheartedly weird lyrics. One particularly appropriate quote from a newspaper said "The Bobs sing like (The Far Side's Gary) Larson draws." Over the years The Bobs have written songs about a band spending all its time trying to come up with a name, the concept of rental food, taking bus tours to outlet malls, and livestock in outer space. Their new album continues their wacky lyrical bent with automotive analogies of love, a celebration of the leisure suit, and the experience of finding a nose ring in one's soup.

The Bobs formed in 1981 when two former employees of a singing telegram company decided they wanted to start what they called a "new wave acapella" group, without knowing what that was. They advertised for a bass, then a high voice and the group was off and running. Two of the original members remain on I Brow Club, Matthew Stull, and the bass who answered the original newspaper ad, Richard Greene. Tenor Joe Finetti joined the group in 1989, and shortly afterward original member Gunnar Madson departed, taking them back to a quartet.

Since The Bobs' last album, a typically eccentric Christmas record last year, another of the original quartet, Janie Scott has departed, to be replaced by the equally versatile Lori Rivera. Once again, they are not afraid to use various non-standard techniques plus some electronic effects as well as some body percussion to make their collection of sounds. This album also contains one song sung with piano accompaniment, which is a first for the Bobs. Though they have done some amazing acapella covers of songs, this CD is all new original material.

Of the songs on I Brow Club, Richard Green relates in his liner notes a day going about his own business in San Francisco encountering all kinds of eccentrics, such as a man in a lime-green leisure suit who went on at length about why he was dressed that way, and a woman who claimed she gained new memories after having a heart-lung transplant. Whether Green's story is completely true or not, those characters and others comprise the subject matter of this CD which is as enjoyably eccentric as the situations alluded to in the notes. And while this may not be the Bobs' most memorable recording as far as their vocal technique is concerned, it nevertheless is a lot of fun and will be appreciated by Friends of the Bobs as their fans are called, and will likely elicit expressions of disbelief from those who have never heard The Bobs in action, vocally or lyrically.

This 16-song album begins with one of two short quirky tracks, a thing called The Ambient One, which subtly pokes fun at some New Age music, while being typically Bobs. <<>>

That leads into one of the relatively serious songs on the album, Hey Coach, Don't Call Me a Queer to which many of the un-athletic who find themselves in school sports are likely to be able to relate. The Bobs get funky vocally. <<>>

The singing foursome include a downright funny love song, Late Model Love, which relates the search for a date to shopping for a car. The subject has been tried before, by Rickie Lee Jones among others, but the Bobs give it their own distinctive spin. <<>>

Typical of the Bobs' thoroughly eccentric songs is A Change of Heart, in which a woman receives a heart transplant from a biker and ends up with a new attitude. <<>>

One of the incidents Richard Greene reported in his liner notes that he said inspired him to wrote a song was an encounter with a bagel shop counter person who would not let him go without telling him about an obscure enchanted holiday no one else knew about. The result was Bongwater Day, on which one's luck supposedly turns around. <<>>

The Bobs go in for an acapella version of nostalgia on Swingers, a tale of a couple leading the carefree life. It's also one of the group's most impressive vocal performances on the CD, with the excellent jazzy arrangement. <<>>

Also dealing with people stuck in the past is Leisure Suit, contemplating the 1970s fashion, with the hope that some day it will come back into style. <<>>

The old dilemma of a finding a fly in one's soup is brought up to the late 1990s in There's a Nose Ring in My Soup. It's the sort of thing that is trademark Bobs. <<>>

There are perhaps three songs likely to get mixed reactions. One, called Is It Something I Said relates a tale of gun murders in a post office. With several such recent incidents, this is one song on which I question the group's taste. <<>>

The other song likely to raise the eyebrows of some, if you will, but get probably get a hearty laugh from many is called Vapor Carioca. The subject is, shall we say, a musical wind. <<>>

The album ends with what I believe to be the first Bobs tune accompanied by piano. The only voice is that of author Joe Finetti. It's called The Gate, and it's also likely to bring less than universal approval, with the subject being the Heaven's Gate suicide cult. <<>>

The Bobs' new album I Brow Club is another in a long series of memorable recordings by this unique group which combines very creative vocal technique with some highly unconventional and often hilarious lyrics that frequently border on the weird. In this new collection of songs, with their newest member Lori Rivera, they continue doing what has brought them a considerable reputation among critics and connoisseurs of the musically clever, while guaranteeing them exclusion from the commercial pop charts. Once again they push the envelope especially lyrically on this album, but they distinguish themselves with their creativity. The result is a CD that is both a lot of fun, and also engaging and musically interesting.

Sonically the album brings no complaints from me. They use some electronic effects on their voices, but do so effectively without losing the live acapella ambience. The mix and overall sonic quality is commendable.

I Brow Club by the Bobs epitomizes the remarkable thing that can happen when four people with just their voices apply a great deal of imagination, resourcefulness and skill.

Click here for a link to the Bobs's Web Site.