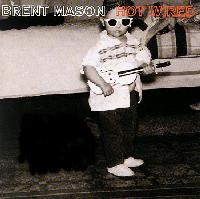 Within the music community, studio musicians command a good deal of respect. They have to play well and quickly on other people's records in such a manner that blends into the lead artist's style, but has enough of an identity that the session player is called back for his or her particular sound. And perhaps more than anywhere on the recording scene these days, Nashville has become the premiere venue for hot studio musicians, with its high proportion of hit records by solo artists backed by studio bands. This week we have a record by one of Nashville's currently hottest studio guitar players, Brent Mason, entitled Hot Wired.

There is a long tradition of solo albums by leading studio musicians, especially guitarists, going back to people like Chet Atkins and Duane Eddy. Such recordings have had mixed success. Chet Atkins of course, has become a household name. 1970s Los Angeles studio guitar star Larry Carlton also established a respected career as a solo artist, while some other projects by session pickers have turned out to be mainly of interest to the guitar cognoscenti, while the guitarist in question resumes his sideman career. Artistically, such studio guitarist solo albums also are varied in results: almost always the musicianship is outstanding, but often, the guitarist takes a scattershot approach, playing lots of styles without really establishing a particular identity.

I suppose Brent Mason's Hot Wired can be considered a little scattershot, as he tries everything from fast country picking to rockabilly to mellow "lite" fusion. But he does them with enough class to make his record a very enjoyable listening experience, if you don't mind a little eclecticism.

Brent Mason grew up in Grover Hill, Ohio, and was given his first guitar at age seven by his grandmother. His family was immediately supportive of his music: in fact, he played in a band with his parents and uncle. One of his first musical heroes was Jerry Reed, whom he discovered through Reed's Nashville Underground album. But Mason was absorbing and copying licks from Ray Charles records in his youth, and later looked to jazzy players like George Benson, Larry Carlton, and Pat Martino for inspiration. He pays tribute to them, stylistically, on Hot Wired.

Mason, though the efforts of his mother, connected with first-call steel guitar player Paul Franklin in Nashville, after moving there with his wife following a layoff from his factory job. Soon Mason was performing at the Stagecoach Lounge, a legendary hangout for hot Nashville players, where he had a chance to play all kinds of styles with them. Mason first tried to establish himself as a songwriter. He had songs recorded by Johnny Mathis and Steve Wariner among others. He also landed a recording contract as a singer, apparently unrealized, but when Keith Whitley insisted on having the same guitarist he heard on the songwriter's demo of a tune he was going to record, Mason's career as a studio musician began to take off. Over the past decade or so, has recorded with Brooks & Dunne, Trisha Yearwood, and Garth Brooks among many others. In the process, he has been expanding the Nashville guitar sound to be a bit more wide-ranging than it traditionally has been. Mason has also become something of a guitar hero in his own right, with his instructional guitar video doing extremely well.

Hot Wired is Mason's first album under his own name, and as mentioned, on this rather short CD, the guitarist pays tribute to some of his heroes, and blazes in his own country-influenced style -- sometimes both at the same time -- playing in a jazzy mode while a steel guitar wails in the background, reminding everyone that the music is indeed coming from the capital of Tennessee.

Joining Mason are some other established Music City studio mavens, including pianist Matt Rollings, known for his work with Lyle Lovett. On bass are Glenn Worf and Michael Rhodes. Lonnie Wilson and Eddie Bayers alternate on drums, and Paul Franklin makes a few appearances on steel guitar, sometimes, as mentioned, in an otherwise mellow jazzy context.

The album begins with a piece in the George Benson tradition called Cayman Moon, tastefully done, though full enough of clichés that it stands a good chance to be played on so-called "lite jazz' commercial radio. Those looking for hot guitar will need to go further into the CD. <<>>

Paying tribute to the Larry Carlton style, including a penchant for Steely Dan-style chord changes, is the following piece, Mellow Midnight. Again, the playing is very classy, especially Mason's solo, while Paul Franklin's steel guitar lurks with hints of Nashville. <<>>

Mason plays acoustic guitar on two tracks. One is called The First Rule of Thumb, and it goes along at a gently swingy pace that can make it easy to forget the amazing guitar work going on. <<>>

The other acoustic guitar piece, My Little Ballerina features Chet Atkins, in a light mellow style typical of some of the material Atkins has been recording of late on his own albums. Atkins puts in a fairly brief but especially pleasing solo on an acoustic guitar that sounds a bit like a Dobro. <<>>

Speaking of Dobro, the current top dog of that instrument, Jerry Douglas, puts in a guest appearance on another barn-burner called Sugarfoot Rag, an old tune by Hark Garland, which is given further bluegrass influence with the addition of fiddler Stuart Duncan of the Nashville Bluegrass Band. Everybody really cooks. <<>>

The album ends with a Western Swing-style tune, a Mason original called Swing with a Sting, which is again handled with great aplomb.<<>>

Brent Mason's new album Hot Wired marks the solo debut by one of Nashville's hottest studio guitarists. Like many such efforts by established hired pickers known for their versatility, Hot Wired tries to show off several of Mason's stylistic facets. So if you're looking for all country guitar, or all rock guitar, or all fusion guitar, then this CD's quick changes of direction may be a bit jarring. Likewise, this is not the most stylistically innovative of recordings, with Mason's efforts being directed to playing already established guitar genres with lots of class, while still adding his own personality and remarkable musicianship. Mason's career of making his artistic statement in short guitar solos in the midst of three-minute country songs is reflected in the album's succinctness -- ten tunes totalling 36 minutes, with only two longer than four minutes. No one can accuse Mason of long, self-indulgent guitar noodling. That having been said, Hot Wired does come off as a thoroughly enjoyable and sometimes spirited album of great instrumental music, wihich might well appeal even to those who are not dedicated guitar aficionados.

Sonically, the album gets "ears up." The mix is very good, with the exception of the acoustic piano which has that annoying excessively bright Nashville sound that makes Matt Rollings' grand piano sound almost like a honky-tonk upright. The dynamic range is quite respectable.

There are quite a few studio guitarists who have made solo albums. Brent Mason, currently one of Nashville's most in-demand players, was due for his, and he comes up with an impressive effort that shows his versatility and makes for great listening.