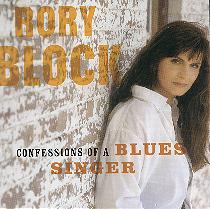 Rory Block: Confessions of a Blues Singer -- by George Graham

Despite the popularity of such artists as Bonnie Raitt and Koko Taylor, the blues appears to the general public primarily a man's occupation. But there are a lot of outstanding women singing and playing the blues. One of the finest, and one with a really interesting career is Rory Block, who has just released her latest album Confessions of a Blues Singer.

Rory Block literally grew up surrounded by the blues. She is the daughter of Adam Block whose Greenwich Village sandal shop during the 1960s was hangout and gathering place for young folk and blues singers to meet some of the blues masters like Son House, Reverend Gary Davis and Mississippi John Hurt. As a youngster, she hung out with the blues pioneers and learned the music directly and authentically from them. She launched a musical career at a young age, and by the 1970s ended up in the pop music world, with a couple of unlikely albums which perhaps because of the nature of the record business had some music with a disco beat. She eventually dropped out of performing for a decade to raise a family before re-launching her career in the late 1980s and was soon attracting a fair amount of attention with her combination of authentic Delta style blues and her more contemporary songwriting. Over a series of 10 albums, roughly one a year, Ms. Block has been balancing and occasionally alternating between the authentic blues singer/guitarist doing old classics by Robert Johnson, Charlie Patton and Son House; and performing her own songs which range in style between something sounding like traditional blues and contemporary singer-songwriter material. Over the years, she has developed a lot of fans among other musicians, including Bonnie Raitt and Taj Mahal, and she has attracted a number of well-known people to her recordings, including Mark Knopfler, Jorma Kaukonen of the Jefferson Airplane and Hot Tuna, Mary Chapin Carpenter and David Lindley.

For her new album, she again goes back to her roots, and creates a recording of mostly live-in-the-studio, unadorned solo performances of venerable and traditional Delta and country-style blues. But she also includes a couple of lengthy original songs. In her introductory notes in the CD booklet, Ms. Block wrote that the inspiration for the record came in a dream, from which she awoke with an old blues song, Charlie Patton's Bo Weevil Blues going through her head, even though she had not heard the song in years, and didn't even know the title, until she spent a long time trying to figure it out. She was thus led to go back to her musical roots and do some rural-style old-time acoustic blues, reminiscent the old-time historic recordings. She tried specifically to avoid a polished sound, instead going after the powerfully honest quality of the old recordings where there was no such thing as overdubbing and first takes were usually what ended up on the record. The result achieves what she set out to do: capture the feel and quality of the blues, and in the process spotlight her own outstanding singing and playing -- and her guitar work can be most impressive.

Though the album is mostly solo, she is joined by a few guests including Bonnie Raitt, who puts in some nice slide guitar on one track. Her son Jordan Block Valdina plays some piano and puts in a vocal on one track, and one of the two original tunes include some additional players.

The album gets under way with the Robert Johnson classic If I Had Possession Over Judgement Day, which she delivers with an appropriately raw edge to her vocals and some fine slide guitar work. <<>>

Another highlight of the album is also a blues standard, Blind Willie McTell's Statesboro Blues which performers from the Allman Brothers to David Bromberg have covered over the years. Ms. Block's version is true to the original spirit of Delta blues. <<>>

The song that inspired the album, Charlie Patton's one-chord tune Bo Weevil Blues, is given some more augmented production, including some overdubbing by Ms. Block and the addition of some subtle bass playing by Scott Petitto. But the added instrumentation does not detract from the authentic quality of the performance. <<>>

Long before the multi-million-dollar Hollywood film popularized it, the wreck of the Titanic was the subject of a old-time blues tune that has been recorded by various people over the years. Ms. Block includes the short song Titanic (When That Great Ship Went Down) on her album and also does a little overdubbing to allow her to do a backup vocal. <<>>

Far less successful is Jordan's performance on I Am in the Heavenly Way, by Bukka White. The younger Block tries to sound like an old bluesman, and the result borders on the embarrassing. <<>>

The album ends with two lengthy original biographical songs by Ms. Block. Mother Marian is a tribute to a venerable woman who died last year at the age of 97, and whom Ms. Block befriended over the years. It's a nice piece of writing, superbly performed by Ms. Block. <<>>

The album ends with another extended narrative track. Life Song is very much autobiographical and considerably less bluesy. The stylistic direction lends itself to a more produced sound, with added drums, bass and electric guitar. The song provides an nice musical summary of Ms. Block's interesting career, though with a touch of self-righteousness. <<>>

Rory Block's lengthy musical journey has been a balancing act between her dual roles as contemporary singer-songwriter and traditional acoustic-style blues singer and guitarist. Her new album Confessions of a Blues Singer emphasizes her old-time acoustic blues side, with mostly traditional material and blues standards served up in solo acoustic settings that spotlight her doing what she does so well, and especially allowing us to hear her fine guitar work. But there are the two original songs that remind us of her other facet, and indeed the autobiographical closing track likely inspired the album's title. The result is a recording that makes for first-rate listening provided one is not too much of a traditional blues purist.

In terms of production and sound, Confessions of a Blues Singer was intentionally done as a minimalist recording, in the manner of the historic blues recordings of the past. Ms. Block said that instead of a separate mixing stage to the album, most of the record was made from rough session mixes which she said more effectively capture the ambience she was trying to achieve. Despite that, the result is still quite satisfying sonically. Instead of intentionally trying to go for the old-time audio quality, the sound is up to today's audio standards, while the mostly live recording still hints at the Delta blues recordings of yore. The dynamic range and clarity are also commendable.

With her commitment to authenticity, Rory Block is not likely to hit the top of the charts like her friend Bonnie Raitt, but Ms. Block's distinctive combination of traditional blues and contemporary songwriting is no less appealing and her new album should help her to win even more fans from among a new generation of those who are discovering one of America's great art forms, and that women can rank among its best practitioners.