Web Review of The Bleeding Hearts 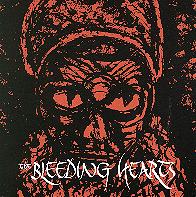 The late 1990s rock scene seems to be populated by two different extremes: On the one hand are worshippers of trendiness, eager to adopt every new sonic and musical fad, from the latest dumb drum samples to just-plain-bad intentionally “lo-fi” sound. On the other are the retro types who seem to obsess on reproducing the exact sound of past decades. Often, though, the retro groups don’t quite “get it” and end up sounding embarrassingly pretentious to those of us who heard the music the first time it came around.

Somewhere in the middle are the “roots rock” bands who draw on tried and true rock traditions and but seek to define their own sound. Here too, the numbers of groups on the scene has reached the point that clichés can fly fast and furious.

The Bleeding Hearts is one roots rock band that “gets it.” Formed in early 1996 in New York City and New Jersey, the quartet’s eponymous debut CD strikes a tasteful balance between rock’s legacy the group’s own individuality.

Principal composer, versatile guitarist and lead vocalist Joe Wilkinson has been writing songs for a decade, but has usually worked as a sideman in groups doing other people’s music. Wilkinson formed the Bleeding Hearts as a vehicle to showcase his writing. He was joined by new Jersey bassist George Kapitanellis, and responding to an ad looking for a keyboard player, John Ginty. Ginty is a busy studio musician, appearing on albums with Neal Casal (in whose band Wilkinson has also toured) and Smashing Pumpkin James Iha, along with touring with Jewel in the 1997 edition of Lilith Fair. Rounding the personnel on The Bleeding Hearts was drummer Phil Cimino, who has since departed.

The Bleeding Hearts blend hints of old Rolling Stones and British Blues, Southern Rock, a dash of Dylanesque Blonde on Blonde-era folk-rock, plus a Wilkinson’s own generous supply of original guitar riffs and Ginty’s eminently tasteful keyboard work to come up with a satisfying and impressive debut release.

The material ranges from the Southern-rock tinged opener For the Good of Man to the folky waltz of Letters, to the all-out rocker On the Run, to the bluesy I Believe Our Time Ain’t Long. There’s even a bit of honky-tonk country underlying Make It on My Own. Wilkinson tends to avoid standard love-song lyrics, in favor of what might be called upbeat philosophical mini-treatises. Freedom of action and seeking one’s own way in life are recurring themes in his writing, with Take a Chance to Be Free serving as a prime example. But relationships do play a part in a songs like Leave It Behind and Come to Me. Throughout, Wilkinson’s likable, unpretentious vocals and his classy non-nonsense guitar define the group’s sound, while Ginty deftly churns away on his B-3 or adds just the right stabs and flashes at the piano.

Boasting solid production and sound, The Bleeding Hearts is a first-rate introduction to a band which has steadily been gaining attention on the East Coast, and from whom we hope to hear much more in the future.

Note: This review may not be entirely impartial: Since the release of this CD, the author has become friends with the band and invited the group to appear on the Homegrown Music series on WVIA. Still, the autho