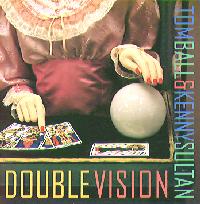 With the blues enjoying continuing and revived popularity, a great many performers are being heard on record, and this wealth of blues talent also reflects the diversity of styles that this great American music form encompasses. When the blues is mentioned, most people these days still think of the electric Chicago style of the blues epitomized by artists like Muddy Waters, and popularized by rock players in the 1960s. But acoustic blues has been around for a lot longer. And different parts of the South gave rise to their own distinctive styles, including Delta and Piedmont or Carolina blues. Fortunately, these traditions are also being carried on by contemporary artists like Keb' Mo' and Cephas & Wiggins, who are also adding their own artistic contributions.

This week we have another mostly acoustic blues act who also adds some of the other ingredients that were around in the formative days of the blues: ragtime, jazz, swing and the humorous lyrics that sometimes found their way into early blues recordings. They are the Santa Monica, California-based duo of Tom Ball and Kenny Sultan, and their new release, at least their fourth, is called Double Vision. While Ball and Sultan draw on some of the influence of Piedmont bluesmen like Sonny Terry & Brownie McGhee -- such as their configuration, with one playing guitar and one singing and playing harmonica -- their background is quite different. Both could be called academics.

The harmonica man and lead singer, Tom Ball, also plays guitar, which he took up at age eleven, before turning to the harmonica and playing in various Chicago-style blues bands during the 1960s. After living abroad for several years, he moved to Santa Monica in 1978. In addition to playing the blues, he is also a noted writer on the subject, works as a studio musician -- having appeared on record with among others Jim Messina and Christopher Cross -- and teaches college-level courses on the harmonica.

Kenny Sultan took up guitar at age seven, and was introduced to the blues by his brother. He made it his academic pursuit, graduating from the University of California at Santa Monica with a degree in ethnomusicology. He also teaches college courses and conducts seminars on guitar around the country.

The two have been performing together for more than 16 years. In addition to their albums, which they have been releasing since the late 1980s, they have also been heard anonymously in national commercials.

This latest album continues the duo's appealing, if not exactly authentic, blend of first-rate guitar picking and harmonica work, with a swinging rhythm and frequently humorous lyrics. On Double Vision, they go electric from time to time and are joined by some of the backing musicians who appeared on their earlier releases, going back half a dozen years. They include percussionist Jody Eulitz, who again favors the cardboard box as his main instrument, and acoustic bassist Tom Lee. Another interesting guest is multi-instrumentalist Joe Craven who plays some mandolin and fiddle, plus his trademark mouth percussion.

While the majority of the material on their earlier CDs was from either traditional or standard blues sources, along with some old rock & roll tunes, most of Double Vision consists of original material. And their songs are one of this album's strong points. The tunes they write often sound old and traditional, but with fun lyrics that can be humorous without turning this into a comedy album. As on previous releases, Ball and Sultan also do an instrumental guitar solo each, providing further diversity.

In addition to the blues, the pair draws on ragtime, swing and even a little country and bluegrass to weave into their sound. That mix of influences is reflected in the opening track, Perfect Woman, an original by Ball and Sultan. It's a fun tune that features some nice mandolin work by Joe Craven. <<>>

More in the standard blues vein is another original song, Your Shoes Don't Fit My Feet. It's in the form of a classic slow blues, but the duo has a way of making it sound vaguely tongue-in-cheek. The performance is by just Ball and Sultan, and it gives them a chance to show how tasteful they are as musicians. <<>>

The duo goes electric, both guitar and harmonica, on one of their original compositions that sounds like a traditional song, Roll of the Tumblin' Dice. As a duo, I think they sound better performing acoustically. <<>>

But when Ball and Sultan bring in some backing musicians, their electric arrangements excel. No Money, No Honey, also penned by the duo, features a standard electric blues band with added saxophones played by Bill Flores. The song's subject is a common one in the blues world, though they manage to put an interesting spin it <<>>

Kenny Sultan's guitar solo is a medley of two old jazz standards, Sweet Georgia Brown and Bill Bailey. He plays them in a ragtime-folk style that manages to swing in a way that's no mean guitar feat. <<>>

Tom Ball's guitar solo is a hymn-like tune called Wing and a Prayer, done in a respectable folk fingerpicking style. <<>>

Ball and Sultan are not afraid to go country from time to time. They do a Merle Travis song called Sweet Temptation, and again enlist Joe Craven, this time on fiddle. Ball also plays his harmonica in a country style. Once again, they give the track a lot of appeal through their great sense of swing. <<>>

For someone in this medium, the song with the most fun-filled lyrics is an obscure non-original song the duo found. The song is called Television and it serves as a great warning of the dangers of that insidious electronic invader of one's home -- commercial, television, that is. Again, the group gives it a great swinging treatment.

Tom Ball and Kenny Sultan's new fourth CD Double Vision, is a thoroughly enjoyable album that shows that the blues can be fun. Though this Santa Monica, California, duo often captures the spirit of acoustic Piedmont blues, their record is not intended to be purely authentic, notwithstanding both their academic credentials. They combine very tasteful playing, with a lighthearted approach in both lyric writing and performing to make a record that is hard to dislike, even if you may not be much of a blues fan. They also are able to strike a delicate balance, making their music a lot of fun without becoming a novelty act. Ball and Sultan's music does not wear thin after repeated hearings -- their lyrics are intelligent. And, the more you hear these guys, the more you come to appreciate their musicianship.

From a sonic standpoint, this CD elicits no complaints from me. The mix is sonically very clean, except for a bit of grunge on the amplified harmonica on one track. Effects are held in check, even when there is some overdubbing, and there is a pleasing lack of audible compression in the mastering. In this respect the CD is a reminder that the best quality sound is now usually found on small independent labels.

Tom Ball and Kenny Sultan's Double Vision is a blues album that will raise your spirits.

(c)Copyright 1996 George D. Graham. All rights reseved.
This review may not be copied to another Web site without written permission.