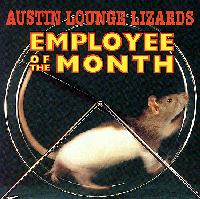 Austin Lounge Lizards: Employee of the Month -- by George Graham

Novelty songs have a long history in pop music. While only occasionally does a humorous song get to be a hit, performers who specialize in the genre have been a constant presence in the corners -- usually the dark corners -- of the music world. Some performers do funny songs as part of their set, which otherwise emphasizes more serious material, such as Tom Paxton and Christine Lavin, while others concentrate more or less entirely on the comedic, people such as Mark Russell, Rev. Billy C. Wirtz, The Foremen, and of course, the Weird Al Yankovic.

This week we have another new release from a group who specializes in novelty songs from the bluegrass stylistic base, along the lines of Homer & Jethro, though their humor is rather more sophisticated. The group is the Austin Lounge Lizards, and their new seventh release is entitled Employee of the Month.

The Austin Lounge Lizards have a rather interesting background. The group formed in 1980 when two Princeton graduates moved to Austin, Texas, to studio law at the University of Texas of Law School. Hank Card and Conrad Deisler had been writing songs together since 1976 at Princeton. In Austin, they met Tom Pittman, who played banjo and steel guitar, and who also came from an academic background, with a degree in Philosophy from the University of Georgia. The group was a part-time affair as the various members pursued their respective graduate degrees and careers. The Lizards bandmembers worked as a bailiff, a construction foreman, a luthier and an administrative law judge, with Pittman still serving as a part-time judge.

Over the years, they have been attracting attention with their blend of bluegrass based music and satirical lyrics, often with the kind of academic acumen that recalls another famous satirical songwriter-college professor, Tom Lehrer. Among the Austin Lounge Lizards' more memorable titles were Gingrich the Newt, Jesus Loves Me (But He Can't Stand You), Life Is Hard (But Life Is Hardest When You're Dumb). Sometimes the Lizards' humor was enough to make one cringe, or perhaps raise the ire of those against whom the satire was directed. On Employee of the Month the Lizards' humor is a bit more generally directed and tends toward satire of music more than anything else. But there are also a couple of semi-political tunes as well. The result, I think, is their best effort yet. Musically, the band is at their best -- bearing in mind that satirical groups tend not to be known for their virtuosity. The also bring in a few guests such as singer-songwriter Sarah Hickman for some backing vocals and Ranger Doug Green of Riders in the Sky.

In addition to founding members Hank Card, who plays guitar and does many of the lead vocals, Conrad Deisler who also sings and plays guitar, and banjo man Tom Pittman, the rest of the Austin Lounge Lizards consist of fiddle player Richard Bowden, and bassist Boo Resnick. On this album they range from bluegrass to Western Swing to a Beach Boys takeoff.

They start with a song that the record company publicity jokes is likely to get them deported to Alaska. Stupid Texas Song takes on the of the biggest things in that very big state: the Texas-sized ego. The result is a lot of fun, especially for us Northeasterners. <<>>

Another clever tune, done in a completely different style is Hey, Little Minivan. It revisits the surfing hot-rodder after years in suburbia. <<>>

The Lizards take up the subject of a broken love affair in their own distinctive style on a song called Monkey on My Back, done in a kind of honky-tonk country style. <<>>

The group does a great satire of a classic-style country broken-hearted tear-jerker. The premise of the song is set forth in its title: The Dogs, They Really Miss You. <<>>

Also in the tongue-in-cheek country vein is Trailways of Tears, lamenting success in the music business. <<>>

There are three cover tunes on the CD. Probably the best is by one Mark Graham entitled Last Words, the tale of someone on a death bed being asked for all his stuff. <<>>

About the closest the Austin Lounge Lizards get to the political on this album is Love in a Refrigerator Box, an only semi-humorous look at homelessness. <<>>

One of the funniest bits of musical satire is Leonard Cohen's Day Job, which imagines the lugubrious Canadian singer-songwriter working as an auto-mechanic. <<>>

Perhaps to show that the group is more than just one who writes satirical lyrics, they include an instrumental -- an old Tex Mex tune called La Cacahuate, which is Spanish for peanut.

The album ends with a hilarious pseudo-gospel song called The Other Shore, whose premise is that in the hereafter, we'll get back all the stuff we used to have. In other words, you will take it with you. <<>>

The Austin Lounge Lizards new CD Employee of the Month, is the best one I have heard from this nearly eighteen-year-old satirical group from the Lone Star State capital. This time their humor is more finely-honed, their satire more entertaining and their musicianship more tasteful. They come up with some great concepts for songs, such as the Texas pride satire or the minivan song, and then take the idea to its full potential with some great literate writing and clever arrangements. They are also rather less political and more likely to poke fun at musical styles and even themselves than before. The result is a lot of fun -- the kind of record that ranks among the best of satirical albums. The quality of the writing is also such that the music will stand up to repeated listenings without the jokes wearing too thin. In fact, successive listens may reveal jokes that might be missed the first couple of times.

Our score on sound quality is close to an "A." The mix is good. The vocals are right where they should be on such a satirical album, and the group's re-creation of styles of the past is aided by the studio process. The album was produced by Conrad Deisler, with co-production by the rest of the band, and engineering and mixing by Larry Seyer. It's not exactly a super-audiophile recording, but it sounds satisfying on a good stereo system.

Satirical songs, especially by groups who specialize in humorous material are not very likely to find their way to the top of the charts. But everybody can use some funny songs sooner or later, and the Austin Lounge Lizards have released a great new collection of them in one of the best humorous albums of the past year.