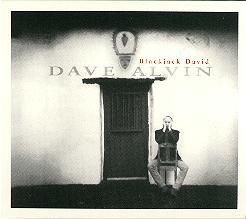 For the past few years, the so-called "roots rock" scene has been quite active, providing an intelligent alternative to 1990s grunge and synthesizer-laden commercial pop. Performers have been going back to the tried and true ingredients that have withstood the years: folky electric and acoustic guitars, thoughtful lyrics, sincere-sounding vocals, a little blues influence, and a banishment of any sound that smacks as electronic. Of course, there are the veteran performers who have been making this kind of music since the 1960s, but one of the first groups to establish a reputation as a roots rock revival band before it was fashionable was the Blasters, who formed in Los Angeles in 1979. The group was founded by two brothers, Dave and Phil Alvin who have kept busy careers making their own music -- with each one being rather eclectic in his output, associating with others on different projects and working as record producers.

Dave Alvin released his first solo album in 1987, called Romeo's Escape, and since then has been making new record every couple of years, exploring slightly different areas, but remaining true to his roots, if you'll excuse the expression. Alvin also recently produced albums by the Western Swing group Big Sandy and His Fly Rite Boys, and another good roots-rock band The Derailers. He also co-produced a various-artists anthology tribute to Merle Haggard called Tulare Dust.

Now Alvin is out with his latest solo release entitled Blackjack David, and I think it's his best yet. It's got all the classic roots-rock stylistic ingredients: very tasteful musicianship and lyrics that tell good stories, mostly about people facing the travails of life, often without the benefit of much good luck. It encompasses folk, rock, blues and a little country in its influences. While there is one traditional song, much of the rest of the material, which was either written or co-written by Alvin has a distinctly timeless, even traditional feel.

Blackjack David was produced by Greg Leisz, a multi-instrumentalist who also produced Alvin's 1994 release King of California. Leisz has served as a studio musician on records with Joni Mitchell, k.d. lang, Beck, Paula Cole, Brian Wilson and Neal Casal. Leisz applies his wide-ranging experience to giving this album an interesting and varied sound, from swampy blues to spooky folk to back porch country. Leisz himself plays a paragraph-long list of instruments from conventional to resonator guitars, steel guitar, mandolin and Dobro. Also appearing are drummer Bobby Lloyd Hicks who also does the vocal harmonies and bassist Gregory Boaz, who are part of Alvin's own occasional band The Guilty Men. There are a total of four different bass player who appear on individual tracks, including Bob Glaub who has recorded with Jackson Browne, and John Fogerty. Various other players make occasional appearances, including fiddler Brantley Kearns from Dwight Yoakam's band.

Leading off is the album's most striking piece, the traditional song after which the CD was named. Blackjack David is given a haunting acoustic arrangement with Greg Leisz playing a variety of traditional-sounding instruments. Alvin's vocal performance is one of his strongest. <<>>

That segues right into one of the record's most upbeat rock-influenced songs. Abilene is the story of nomadic woman, who has not had it easy and just wants to find a better a life. <<>>

Another memorable song about a wanderer is California Snow, which explodes the myth of the Golden State being the land of milk and honey. The main character in this vaguely-country influenced song could be a migrant worker. Alvin said the lyrics were inspired by the crackdown on border enforcement, which drove people further north to freezing weather. <<>>

There are some love songs. One of the best is Evening Blues. Despite the song's name, the style is distinctly folky. <<>>

One of Alvin's original compositions that has a distinctly traditional sound to it is Mary Brown. The folk-influenced arrangement accompanies a lyrical tale that is suitable for an epic film. <<>>

One of the more interesting and fun musical arrangements on the album comes on the track Laurel Lynn, which Alvin himself describes as "Howlin' Wolf doing a session with a Cajun accordion player and Roy Acuff's band."

An interesting twist on the classic lament of love lost comes on The Way You Say Goodbye, which is given a kind of down-in-the-swamp treatment, with the band in fine form. <<>>

A track called 1968 features the album's finest narrative lyrics. It's the tale of two men who went to Vietnam, only one of whom returned. The one who made it back was never able to get his life back together. <<>>

The album ends rather like it begins, with a dark, haunting song. Tall Trees features impressionistic lyrics that go with the spooky arrangement, with Alvin's vocal being particularly striking. <<>>

Dave Alvin, one of the founders of the seminal band The Blasters, has made his finest solo album yet. Blackjack David has a distinctly acoustic sound, and hints at traditional folk, blues and country. Alvin's lyric writing is superb, as he weaves intriguing stories of some hard-luck characters. Of his lyrics, Alvin says "Most of the story songs I write don't have endings. They leave room for different interpretations." The musicianship and arrangements are the epitome of what good roots rock can be, with tasteful playing by all, and some excellent production by Greg Leisz.

Also, the album is admirable sonically, with a decent dynamic range and very good treatment of the acoustic instruments and tasteful, subtle use of studio effects.

Roots rock is more or less by definition timeless music. A lot of younger bands bored with the trendiness of commercial pop have turned to the combination of folk, early rock and blues for their inspiration. Dave Alvin as one of the genre's early innovators and proponents proves that such avoidance of trends can result not only in music that gets better with time, but a performer who also does the same.