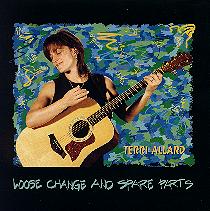 I was at a folk music conference recently, with singer-songwriters everywhere one turned. After a while, I was struck by the demographic makeup of the literally hundreds of artists gathered there: most were either younger women or relatively older, Baby Boom generation men. There were not a lot of younger male acoustic singer-songwriters around, something which one realizes is certainly reflected in the makeup of the album releases in the genre. The reason for that might make for an interesting sociological study -- perhaps guys like to get into loud rock bands and the female performers prefer more acoustic sounds. But since the latter 1980s, with the success of Suzanne Vega and Tracy Chapman, the music scene in general also has been more receptive to articulate women songwriters.

In any case, this week, we have yet another intelligent, worthwhile acoustic singer-songwriter record by a younger female artist, Terri Allard, whose new CD entitled Loose Change and Spare Parts is her third release.

Terri Allard is based in Virginia near Charlottesville, and has been performing professionally since the early 1990s. She was a finalist in the Kerrville, Texas, New Folk Festival in 1994 and 1997, and performed at such events as the Telluride Folk festival, and at coffeehousess and other folk venues across the country. She has made a couple of appearances here in Northeastern Pennsylvania. She released her eponymous debut album in 1994, and followed that in 1996 with Rough Lines which also attracted critical attention.

Her new release moves toward a slightly more energetic sound, though by no means has she gone rock & roll. Instead, she presents a collection of songs that though primarily folk in texture, sometimes sound as they just might be headed off toward country. Ms. Allard's got a bit of a twang in her voice at times, while at others, she can assume the role of confessional songstress like Joni Mitchell. Her songs often touch on relationships, but she is one to address the topic from unexpected perspectives, such as that of an abused woman who retreats into her dreams for escape, or unconventional takes on unrequited love.

On the album she is joined by most of the same musicians who played on Rough Lines, including acoustic bassist Sonny Layne, drummer Eddie Hall, harmonica man Gary Green, and Jeff Saine, who plays lap steel guitar and other instruments. The arrangements can get energetic, but Ms. Allard's acoustic guitar is almost always at the center. Saine's lap steel can range from country to bluesy to rocky, and often runs somewhere in between.

The album begins with one of its more contemplative tracks. Lifeline is a love song, or rather a song about a relationship on the rocks, which the protagonist is attempting to restore. <<>>

The following piece also features bittersweet lyrics. The title track, Loose Change and Spare Parts, is a metaphor for what the relationship has become. In this case, the arrangement takes a step or two up in the energy level. Jeff Saine's lap steel is somewhere between bluesy and country while the arrangement assumes a swing beat. Ms. Allard rises to the occasion with a kind of torch-singer approach to her performance. <<>>

For a radio person, the song We'll Have Elvis contains some of the most appealing lyrics. The song's premise is that age-old urge of wanderlust -- getting in the car, hitting the road, and in this case listening to the radio. Illustrious fellow Virginia folksters Robin and Linda Williams provide the backing vocals. <<>>

Perhaps the most striking track is Borrowed Time, on which Ms. Allard is accompanied only by Sonny Layne's acoustic bass and Gary Green's harmonica. The piece highlights Ms. Allard's fine vocals, delivering the album's saddest lyrics, seemingly contemplating the death of a friend. <<>>

Ms. Allard's distinctive approach to lyric writing is perhaps no better exemplified than in La La Rosie Goes, the story of a woman trapped in a bad relationship with possibly an abusive husband. Her only escape seems to be to retreat into sleep and dreams. <<>>

Ms. Allard takes up that other electronic medium in a song appropriately entitled The Television, about the bizarre and insidious world depicted on commercial TV, taken from an appropriately caustic viewpoint. <<>>

The album gets closest to country in style on Words You Cannot Say, though the lyrics are more appropriate for a literate folkie. Again, Ms. Allard provides a distinctive approach to love in this case, unrequited love. <<>>

Ms. Allard calls her own record label Reckless Abandon Music. On this album, she includes a song by that name. Also with a country twang, thanks to Saine's lap steel, Reckless Abandon considers life's possibilities -- and the regret at not taking chances. <<>>

The CD ends with its closest thing to a disappointment, I Don't Want to Know. The song is performed in a nice intimate solo setting, but it reminds me of a bit of some of the overly sentimental old Fifties rock ballads, down to the lyrics. <<>>

Terri Allard's new third album Loose Change and Spare Parts is an appealing and intelligent recording from one of the many talented female acoustic singer-songwriters on the scene today. She is fine singer with a touch of country in her voice, while she writes songs that creatively and poetically explore relationships in the manner of Joni Mitchell. Her mostly acoustic backing band keeps the musical setting tasteful and generally understated, despite some more energetic and electric arrangements than on her previous record. The songs themselves and Ms. Allard's vocals remain at the center.

On the technical side of things, the album was co-produced by Ms. Allard, engineer Kevin McNoldy and Dwayne Evans, who keep strike a nice balance between the electric and acoustic facets of the music. The recording has good clarity and is mixed generally well, though there are a few small sonic rough edges, especially around the drums, and the acoustic bass lacking a little of the richness that the instrument affords. But overall, the CD rewards playing it a good sound system and has a fairly good dynamic range.

Terri Allard has been increasingly making a name for herself on the crowded female singer-songwriter scene of the late 1990s. Her new album along with her vigorous touring schedule, should help to make her even better known.