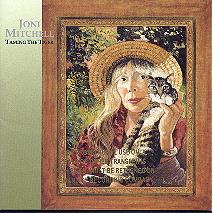 In the formative days of the singer-songwriter scene back in the 1960s, there were those who addressed the great issues of the day, or considered generally weighty matters in their poetry and song. But one of the most enduring figures who came out of the scene epitomizes another facet of the art. Joni Mitchell personnifies what has come to be called the "confessional" singer-songwriter, the artist who shares her feelings with the rest of us in song, chronicling her own relationships and in some ways using her songs to come to grips with her own life, and in so doing, finding many fans who would relate to the same kinds of things.

Ms. Mitchell, since emerging with her first album thirty years ago, has been one of the most stylistically restless artists on the scene, often keeping her fans wondering what her next record would sound like, and in the process exploring new artistic ground and adding more musical facets to her style. Over the years, her eighteen previous albums have run from the acoustic folk of her early releases to the jazzy pop of the early 1970s, to the more sparse sounds in the latter part of that decade, to explorations with jazz musicians, electronic influenced music in the late 1980s to her current, less readily categorizable work. Now Joni Mitchell is out with a new album entitled Taming the Tiger, coming four years after Turbulent Indigo which won Grammy Awards in more than one category.

Once again, there is an interesting story behind this record, and Ms. Mitchell manages to weave that into some of her songs on Taming the Tiger.

Though Ms. Mitchell has remained a critics' favorite, and commands a loyal following, she is no longer considered a hot commercial property by the music industry. In fact, she notes with some disdain how so many younger artists are being compared to her as if she had already died. So she grew to hate the music business, despite all the honors being bestowed on her. She was also growing increasingly frustrated with guitar tuning problems, apparently brought on by her distinctive manner of playing, and the way she had worked in different alternate tunings. So she took on a job performing at the New Orleans Jazz and Heritage festival, which she decided was going to be her swan song, then get out the music business altogether. Not long before that show, she was introduced to a new electronic guitar instrument that permitted her to do what she wanted with guitar tunings. So she plunged into the new instrument's possibilities, and when the audience at the New Orleans concert was much greater than expected, Ms. Mitchell felt revitalized, began writing more songs and working on a new record. The result is, on Taming the Tiger, yet another stylistic phase in Ms. Mitchell's restless career.

Her electronic guitar has a distinctive sound, somewhere between guitar and synthesizer. Sometimes, she uses it to create rather orchestral-like sounds. At others, she used it to give this album the stark electric folk sound of my own favorite Joni Mitchell record Hejira. Jazz influence remains an important part of Ms. Mitchell's music, and she enlists of couple of well-known jazz musicians to appear, including saxophonist Wayne Shorter, the Miles Davis veteran and co-founder of the seminal fusion band Weather Report. The drummer, when drums are heard, is Brian Blade, one of the twenty-something so-called "young lions" in jazz. Also appearing is her ex-husband Larry Klein on acoustic bass, and steel guitar player Greg Leisz.

In classic Joni Mitchell form, the songs were, for the most part, inspired by events in her life, including her general disenchantment with the music business, a family reunion, a recent news story, and even the prolonged but temporary disappearance of her cat. As usual, she tries to frame the songs as having more universal relevance, which she has almost always succeeded in doing in the past. This time she produced the album herself, after being co-producer of some of her recent previous efforts.

Taming the Tiger begins with a piece called Harlem in Havana which was, in a way, inspired by her new electronic guitar. Ms. Mitchell said that as she was exploring the sounds the instrument could make, she found one rather like a marimba that she liked, but didn't really have a song on which it fit. Then she recalled a travelling black burlesque show that came through her Canadian hometown when she was very young, a show that the children were not allowed to see. But, of course, as a child, she was determined to see that show, and the exotic acts it had to offer. The piece provides a vehicle to explore the sonic possibilities of the instrument and her own lyrical imagery. Wayne Shorter puts in some very nice playing on his soprano sax. <<>>

The following track Man from Mars comes off as an old-fashioned lost-lover song lyrically. But it was inspired by her cat named Man from Mars, who disappeared for more than two weeks before returning, during which time she wrote the song. The piece was originally commissioned for a movie, in which the director was looking for a song about a woman's grief. Ms. Mitchell puts the sounds from her guitar synthesizer to use in a rather orchestral way. <<>>

With the wonderfully sparse sound hinting at her Hejira album, is the song Love Puts on a New Face. The guitar sounds are supplemented by some very attractive soprano sax sounds from Shorter. Lyrically, it's a kind of soliloquy considering relationships in search of universal themes. <<>>

One of Ms. Mitchell's philippics on show business, and business in general, is Lead Balloon, given an appropriately hard-edged musical setting. <<>>

More specifically aimed at the music business is the title piece Taming the Tiger, a surprisingly mellow-sounding piece considering the pointed imagery in the words. <<>>

One of the more introspective-sounding songs is Stay in Touch, in which the commonly used disposable parting pleasantry is explored for its implications. The spacey instrumental setting is particularly attractive with some since orchestral sounds from Ms. Mitchell's guitar synthesizer. <<>>

The song inspired by a news event is No Apology, written after the story of the rape of Japanese women by American soldiers stationed in Okinawa. After news of the event come out, Ms. Mitchell quotes an American general there as offering "no apology." <<>>

Joni Mitchell has apparently been a long-time fan of music from old Westerns. Several years ago, she recorded a version of Cool Water. This time, she does song from the Sons of the Pioneers, My Best to You. Though the arrangement includes a steel guitar, otherwise the accompaniment is positively orchestral with Ms. Mitchell's synthesizers. <<>>

The album ends with a brooding solo instrumental featuring Ms. Mitchell's electronic guitar entitled Tiger Bones, that provides a nice closing to the record, but is hardly the most substantial piece of composing on the album. <<>>

Joni Mitchell's new release Taming the Tiger, her first in four years, is in some ways, a comeback record for the veteran singer-songwriter. Prior to making the album, she had decided to get out of the music business, and was only inspired to press on only after finding an interesting new instrument to play and discovering after a live performance that her fans had not deserted her after all, in an industry where experienced performers are cast aside for the latest disposable trend followers. She channels some of that contempt for the commercial music business into the songs, and true to form, weaves personal experiences into lyrics that can have wider implications. As she says in a recent interview about this album, "All my records are cathartic." Musically, Taming the Tiger is one of her more interesting recordings. She uses her new guitar synthesizer instrument to create arrangements that range from the stark, brooding quality of her 1976 album Hejira to the more jazzy to near-ochestral arrangements vaguely reminiscent even of art rock. Nevertheless, the minimal accompaniment for the most part, with the excellent soprano sax work of Wayne Shorter makes fine listening, and music whose interest won't fade after a few listenings.

Sonically, Taming the Tiger is about as good as you'll get on a major label given the industry's tendency to sacrifice dynamic range for loudness. The mix, by Joni Mitchell herself and Dan Marnien is impressive in conveying both a feeling of intimacy along with an occasionally spacey quality.

Over 30 years, Joni Mitchell has been a stylistically restless artist. Her new album represents yet another phase, which may or may not appeal to some who have latched on to particular periods. Those who like Hejira will probably be the happiest with this album, while those for whom the Court and Spark album was her pinnacle may be less enthusiastic about Taming the Tiger's more stark, intimate, largely drumless arrangements. But this is an album that rewards a fair, open-minded hearing. It's another substantial work from one of our most durable and significant singer-songwriters.