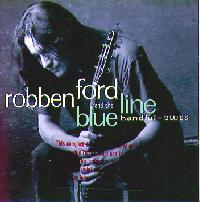 Robben Ford & the Blue Line: Handful of the Blues
by George Graham

The blues is certainly making a comeback on the contemporary music scene. Its arrival has been confirmed by that bastion of the music industry, Billboard magazine which just this month started publishing a blues album chart for the first time. At the top of that first blues chart is Eric Clapton's multi-platinum From the Cradle, and that points up an interesting dilemma. What's blues, and what isn't?

Back in the 1960s, when people like Eric Clapton with John Mayall's Bluesbreakers and even the early Rolling Stones made blues-based music popular for a younger generation, the artists doing that were young Englishmen taking a venerable American sound, transmogrifying it, and selling it back to American audiences. Granted they did try to help bring some of the blues pioneers to prominence by inviting them onto tours and albums, but long-time blues fans, i.e. the purists, would say that what Clapton and the Stones played was not really the blues, but a form of blues-rock. Now Clapton and Mayall have matured enough to be called veteran performers themselves, but the current blues revival was touched off by the popularity of some other performers the purists would call blues-rock, Stevie Ray Vaughan and the Fabulous Thunderbirds.

Fortunately, this time around, a lot of straight blues artists, including long-time veterans whose credentials even the most curmudgeonly blues purist would never question, are winning wide popularity. From relatively younger performers like Robert Cray to septuagenarian legends like John Lee Hooker, the blues is on a roll.

And that brings us to this week's album, which as something of a blues purist myself, I would have to characterize as blues-rock. It's the latest by guitarist Robben Ford and his group The Blue Line, a CD entitled Handful of Blues.

Robben Ford came to prominence as one of those smooth, jazzy West Coast studio session players whom many compared to Larry Carlton. Both played with a group called the LA Express, which backed Joni Mitchell in mid 1970s. He also played on George Harrison's Dark Horse album, plus records by people ranging from Barbra Streisand to Kenny Loggins to Little Feat.

Eventually, Ford would go on to be a founding member together with Russell Ferrante of the fusion band Yellowjackets. By the mid 1980s, Ford would become part of Miles Davis' touring band.

But Robben Ford didn't start out to be a fusion player. His professional career began in 1970 when he and his brother Jim moved to San Francisco right after high school to form a blues band called the Charles Ford Band, named after their father. For a while, the group backed harmonica man Charlie Musselwhite, and when they split, another Ford brother, Mark, was brought in take on harmonica duties. The group became popular in the Bay Area before they broke up in 1972. Robben Ford then went on to join the backing band of bluesman Jimmy Witherspoon, which also contained Russell Ferrante, It was the beginning of Ford and Ferrante's long association.

After concluding a tour with Miles Davis in 1987, Ford wanted to return to his roots, so he made a record that combined his classy smooth guitar style with a good helping of the blues, and featured his vocals, which he hadn't done on record since his days with the Charles Ford Band. The album, entitled Talk To Your Daughter, was eventually released by Warner Brothers in 1988.

Since then, he has been more or less concentrating on the blues on his various releases, including Robben Ford and the Blue Line in 1992, and Mystic Mile the following year. The Blue Line, the band, by the way, is a trio with Ford on the guitar, bassist Roscoe Beck and drummer Tom Brechtlein, another fusion player, who had been part of Chick Corea's band. I say "more or less" concentrating on the blues, since his experience as a fusion player is evident on each of his albums. The blues and jazz have always had an affinity for each other, but the blues and jazz-rock fusion is a rather novel and interesting combination.

Another factor setting Ford's music apart from traditional-style blues is his vocal. He has a high, airy tenor voice more typical of a folkie than the big growling baritone one expects with the blues. While it may not be exactly authentic blues, it's distinctive and has plenty of musical merit on its own terms.

Up to now, Ford had either produced or co-produced all his blues albums, but for the new release, Handful of Blues, another LA studio guitar veteran, Danny Kortchmar who can be heard on several classic James Taylor and Jackson Browne albums, sits in the producer's chair. He seems to push Ford in more of a loud blues-rock direction in the pattern of the Sixties British blues invasion, and away from the jazzy sound of his previous albums. Ford does that for the first few tracks, cranking up his guitar and trying to shout his vocals, but the result is disappointing. Ford will never be Muddy Waters. As the album progresses, though, he settles back into his familiar jazzy groove, and also throws in some Memphis-style R&B influence which adds a nice touch.

Guests on the album include his long-time friend Russell Ferrante, New Orleans blues & R&B pianist Henry Butler, Ford's brother Mark on the harmonica, organist Ricky Peterson, and Kortchmar, who plays rhythm guitar on a few tunes. In addition, Roscoe Beck plays what sounds like an acoustic bass some tracks.

The material includes mostly original tunes, with a few covers ranging from a Willie Dixon classic to an old soul tune once done by Traffic. On his original tunes Ford can't resist the temptation to throw in some jazzy chord changes here and there.

As usual, Ford's guitar playing is very tasteful, and he likes to include a few occasional virtousic or otherwise brilliant licks here and there without making the album a guitar exhibitionist's show. Usually, it's when the tune is about to fade out that Ford will let the sparks fly with his guitar.

The album begins with one of those crank-it-up blues-rock tunes, an original called Rugged Road, with Ford straining his voice to sound more rough-edged, and the whole tune taken at too fast a tempo. As on several other tunes on the CD, Ford overdubs a rhythm guitar to supplement his lead playing. Despite the fact that it's one of the tracks I like least, Ford puts in some great guitar playing during his solo.

Another of the rockier tracks on Handful of Blues is an old song that Taj Mahal recorded in the late 1960s, Chevrolet. Robben's brother Mark Ford sits in with his harmonica, while the rhythm guitar is supplied by Danny Kortchmar.

More laid back, and fitting Ford's vocal style more is Don't Let Me Be Misunderstood, which enlists the services of two keyboard players, Russell Ferrante on the piano and Ricky Peterson on the organ. But the focus of the arrangement doesn't leave Ford's guitar, and he doesn't disappoint.

Another of the album's best tracks is Top of the Hill, an original song which is given a bit of Memphis-style soul in the arrangement. Ford especially shines on his rather short guitar solo.

Given an old-fashioned blues shuffle beat is another Ford original Tired of Talkin'. Kortchmar does duties as rhythm guitarist on this nicely performed track.

Chicago style electric blues is probably the genre at which Ford is least successful, and yet another of this album's highlights is a classic Windy City blues by Willie Dixon, I Just Want to Make Love To You. The key is that it is given a more laid-back treatment. The combination of a great instrumental performance including bluesman Henry Butler on piano and Mark Ford on harmonica, and a rather relaxed vocal by Ford give the old blues chestnut a new spin.

Most of Ford's albums have contained a good instrumental or two, usually jazzy. Handful of Blues features an original tune called The Miller's Son, which is one of those tracks at the beginning of the album that are too rocky and frantic for my taste. There's no question that Ford puts in some impressive guitar licks, but the overall result is not the thing at which Ford excels. The sound could be any of thousands of other blues-rock bands out there with a hotshot guitarist.

On the other hand, perhaps the most impressive track on the CD is Good Thing, which also has some of those Memphis-soul grooves with Russell Ferrante playing an old-fashioned non-synthesized electric piano. It's the longest track on the album, and echoes Ford's different stylistic strengths. At times he can sound as he did with the LA Express, while at others he's playing straight out rock or blues, in this laid-back but musically interesting Ford composition.

Robben Ford and the Blue Line's new album Handful of Blues is not the group's best release. Perhaps it was producer Danny Kortchmar who pushed Ford and his trio in a more rock direction, especially on the CD's first few tracks. But there is still plenty of worthwhile listening on this fourth blues-oriented album by Ford. His guitar playing is first-rate, and every time one listens to his solos, some little flash of imagination or musical virtuosity will pop out without this turning into purely a guitar showcase album. As the record goes on, one encounters some of the best material Ford has done, but there's a little less consistency than on his two previous releases.

Sonically Handful of Blues is nicely done. The mix lets you hear everything, and Kortchmar and Ford avoided the tendency to leave in the sonic flaws that some people think adds authenticity to the blues. In the mix, the compression is also kept under control.

Ford's growing number of fans will probably not be disappointed overall with his new release, while those who enjoy the rockier side of the blues, served up with lots of class, will find much to praise on Handful of Blues.